It should be noted that Â Islamo-propagandist Â Nicolas Blancho likes to get himself video taped in front of the 700 year old wooden bridge of Lucerne, which is a priceless treasure full of religious icons and carvings.

One third to one half of this bridge was burned by a Chechen Muslim, something very few people know.
For this radical headbanger to stand in front of this bridge doing da’awa signals a clear threat: submit or we’ll burn your stuff.

(Submit and we’ll burn it anyway) but we won’t tell the dhimmies this, not yet……

Â Cheradenine Zakalwe: Â Looks like theÂ burying a pig to stop a mosqueÂ technique hasn’t worked this time. Â (Matter of fact; I don’t know of any place where it did work. Muslims would build a mosque on top of the Chernobyl nuclear reactor if it manifested Islamic supremacy)

Well, if they weren’t outraged over that they would be outraged over something else, like church-bells or a ban on minarets, or the burqa ban or a lack of submission or resistance to pay the Â jiziya. (Tribute)

“The MoslemsÂ Â are being victimized by some in the far right:”

Pig tram in Basel, supposed to keep the Muzz from attacking and raping the natives…Â

There are an estimated 500,000 Muslims in Switzerland, out of a population of more than 7 million saysAbdel Azziz Qaasim Illi, spokesman for Switzerland’s Central Islamic Council, Â  who admitted that the population is rising but that most Swiss Muslims were immigrants from Albania and elsewhere in the Balkans, where there is a tradition of moderate Islam.

Â Not a word about the recent string of murders by “moderate Muslims” from the Balkans….

(CNN)Â — Muslims in Switzerland are responding with shock and outrage after a pig carcass and severed swine heads were discovered buried at the site of a proposed mosque.

Police in the town of Grenchen uncovered the pigs Friday after they received an anonymous message claiming that someone had buried the body parts and spilled 120 liters of blood from the animals in an effort to desecrate the ground to halt the construction of the mosque.

Pork and pork byproducts are haram, or forbidden, in Islam.

The unsigned flier, written in German, says “This operation was done (conducted) to protest against the growing expansion of Islam in Switzerland,” and says that a similar desecration in Spain earlier halted another mosque construction project. (More) 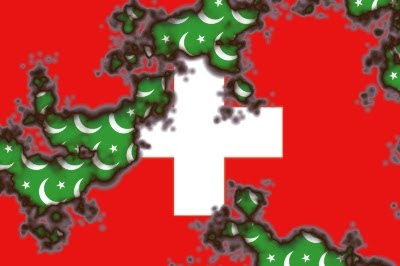 The following article fromÂ Politically IncorrectÂ contains excerpts of an interview with a former Swiss immigration official who blew the whistle on laxity and corruption in his country’s asylum program. He reported that most asylum-seekers who come to Switzerland are criminals scamming the system, and his honesty caused him to be persecuted by the authorities.Many thanks to JLH for the translation:

Asylum: Switzerland Is as Wide Open as a Barn Door

The official Adrian StrÃ¤ssle informedÂ WeltwocheÂ (This Week in the World) about the abuses in the St. Gall immigration office. Early in the morning, two days before the recent elections, he was hauled out of his bed by an eight-man police raiding squad on the orders of the head of the security and justice department of canton St. Gallen, Karin Keller-Sutter, on the grounds of breach of secrecy, and his entire household was stood on its head. The partially armed police even rifled through his scrap paper so long as investigative judge Ogli (spelled differently at the end of the article) was standing straddle-legged in the room.

WeltwocheÂ had reported that Keller-Sutter illegally prevented the judicially decreed deportation of the Turkish Al-Hariri family. Despite that, the voters elected Keller-Sutter to the Council of States with over 100,000 votes, but did not know at the time about the militaristic arrest of a blameless citizen and official. Here now is an excerpt from the interview byÂ WeltwocheÂ with Adrian StrÃ¤ssle, who worked for more than ten years in the asylum authority and is familiar with asylum cheats. He believes that in this time he has not seen one single political refugee. None. Just shady adventurers and economic refugees.

Weltwoche:Â The Turkish family is officially named “Al Hariri.” That does not sound very Turkish.

StrÃ¤ssle: The name is most likely false. That accords with the customary smoke and mirrors. Swiss authorities are laissez-faire about asylum-seekers who make false statements. We have experienced that frequently. An African comes into the country under some assumed name, loses his papers, later marries a Swiss citizen, and suddenly reveals his true identity. A trickster like that, who leads the authorities around by the nose â€” nothing happens to him.

I see great resignation, along with indifference. The asylum system is rudderless. Abuse is so great that many officials just prefer to stick their heads in the sand.

What is the real problem?

Switzerland is as wide open as a barn door. Simonetta Sommaruga recently suggested shortening the process is the ideal solution. But that is not the solution. The problem begins before that, with arrival. Our goal must be to allow fewer people into Switzerland.

How many of the asylum-seekers are politically persecuted in their homelands?