To be fair; we never owned these places, but 70 years ago Lebanon was still a Christian country, once upon a time Â even Afghanistan was Â Hindu and Â Buddhist, Â Â and Â all the Â nations of the Middle East were once far more pleasant, safer and productive before Â they surrendered Â to Islamic colonizers who destroyed their culture and civilization, Â subjugated and forcibly converted their inhabitants to the parasitic cult of Islam.

The Sultan didn’t even mention the fall of the Ivory Coast early on in 2011, or the jihad against the Christians in Nigeria, Kenya, Ethiopia and many other places in Africa.

The Hindu reported this week that the Obama administration hasÂ turned to Sheikh Yusuf al-Qaradawi, the Muslim Brotherhood’s leading jurist, to mediate secret negotiations between the United States and the Taliban.

Sultan KnishÂ reviews the 2011 disaster. (Thanks to GWP for the tip. Full article below the fold.)

Are Egyptians Using Democracy to Vote Against Democracy?

You bet. One man, one vote, one time. Forget about the women, they are ‘deficient in intelligence’.

About the only people having a Happy New Year in the Muslim world aren’t the Christians who are huddling and waiting out the storm, but the Islamists who use a different calendar but are having the best time of their lives since the last Caliphate. 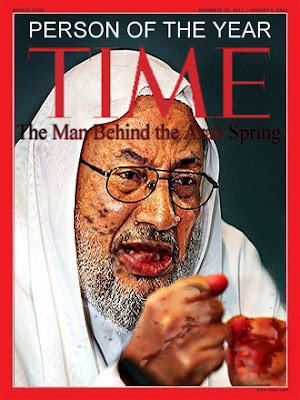 The news that the Obama Administration has brought in genocidal Muslim Brotherhood honcho Yusuf Al-Qaradawi to discuss terms of surrender for the transfer of Afghanistan to the Taliban caps a year in which the Brotherhood and the Salafists are looking up carve up Egypt, the Islamists won Tunisia’s elections, Turkey’s Islamist AKP Party purged the last bastions of the secular opposition and Libya’s future as an Islamist state was secured by American, British and French jets and special forces.

Time Magazine declared that 2011 was the Year of the Protester, they might have more honestly called it the Year of the Islamist. In 2010 the Taliban were still hiding in caves. In 2012 they are set to be in power from Tunisia to Afghanistan and from Egypt to Yemen. They won’t go by that name of course. Most of them will have elaborate names with the words “Justice” or “Community” in them, but they will for the most part be minor variations on the Muslim Brotherhood theme.

2011 will indeed be remembered, but not because of any Arab Spring or OWS nonsense. It will be a pivotal year in the rise of the next Caliphate. A rise disguised by angry protesters waving cell phones and flags. And clueless media coverage that treated Tahrir Square as the new fall of the Berlin Wall.

This was the year that Obama helped topple several regimes that served as the obstacles to Islamist takeovers. The biggest fish that Ibn Hussein speared out of the sea for Al-Qaradawi was Egypt, a prize that the Islamists had wanted for the longest time, but had never managed to catch. That is until the Caliph-in-Chief got it for them. Egyptian Democracy splits the take between the Brotherhood and the Salafists, whom the media is already quick to describe as moderates. First up against the wall are the Christians. Second up against the wall are the Jews. Third up is all that military equipment we provided to the Egyptian military which will shortly be finding its way to various “moderate militants” who want to discuss our foreign policy with us.

But there’s no reason to sell the fall of Tunisia short or the transition in Yemen. And when mob protests didn’t work, NATO sent in the jets to pound Libya until Al-Qaeda got its way there. Turkey’s fate had been written some time ago, but 2011 was the year that the AKP completed its death grip on the country with a final crackdown on the military, which has now ceased to be a force for stability.

Left out of the picture is Somalia. Liberals fulminated when Bush helped drive out Al-Shaab and its jolly Muslim lads with a habit of beheading people who didn’t grow beards or watched too much soccer. Any number of editorials complained that we had destabilized the country and that the Islamic Courts Union were really a bunch of moderates in disguise.

Sadly Obama has not been able to salvage the position of Al-Shabab which is low on money and has turned toÂ forcing 12 year old girls into prostitutionÂ and torturing and murdering those who refuse. They’re also forcing the elderly to join its militias. But there is good news. Like every terrorist group, Al-Shabab has gotten itself a Twitter account and when O finds 5 minutes in between vacations and golf tournaments, the White House will order neighboring African countries to withdraw their armies and send in Al-Qaradawi to negotiate.

But even if the Islamists don’t get Somalia, they’ve got a nice chunk of North Africa to chew over, not to mention a few more slices of the Middle-Eastern pie, and Afghanistan will be back in their hands as soon as they manage to outmaneuver Karzai, which given his paranoia and cunning may admittedly take a while. But the Taliban are not big on maneuvers, they have the manpower, which means it’s only a matter of time until they do what the Mujaheddin did to the puppet Soviet regime. A history that everyone in the region is quite familiar with.

The ugliest part of this story isn’t what Obama did. It’s when he did it. If he really had no interest in winning Afghanistan, and if as he had said, the Taliban are not our enemy, then why did we stay for so long and lose so many lives fighting a war that the White House had no intention of winning? The ugly conclusion that must be drawn from the timing of the Iraq and Afghanistan withdrawals is that the wars were being played out to draw down around the time of the next election.

What that means is Obama sacrificed the thousands of Americans killed and wounded in the conflict as an election strategy. The idea that American soldiers were fighting and dying for no reason until the time when maximum political advantage could be gained from pulling them out is horrifying, it’s a crime beyond redemption, an act worse than treason– and yet there is no other rational conclusion to be drawn from the timetable.

If the Taliban were not our enemy, then the war should have ended shortly after the election. Instead Obama threw more soldiers into the mix while tying their hands with Rules of Engagement that prevented them from defending themselves or aggressively going after the Taliban. Casualties among US soldiers and Afghan civilians increased. Now the Taliban are no longer our enemy and we are negotiating a withdrawal.

There are only two possible explanations. Either we lost the war or Obama never intended to win it and was allowing the Taliban to murder American soldiers until the next election. If so we’re not just looking at a bad man at the teleprompter, we are looking into the face of an evil so amoral that it defies description.

But whatever motives we may attribute to the Obama Administration the outcome of its policies in backing the Arab Spring with influence, training and even weapons is indisputable. What Carter did to Persia, Obama has done to Egypt, Tunisia, Libya, Yemen, Afghanistan and that’s not the whole of the list.

Iraq will likely fall to Iran in a bloody civil war, whether it will be parts of the country or the whole country depend on how much support we provide to the Kurds. Under the Obama Administration the level of support is likely to be none.

Once the Islamists firmly take power across North Africa they will begin squeezing the last states that have still not fallen. Last month the leader of the murderous Enhada Islamists who have taken power in Tunisia stopped by Algeria. Morocco has not yet come down, but at this rate it’s only a matter of time.

Syria remains an open question. The Muslim Brotherhood is in a successor position there and would welcome our intervention against the Assad regime. The Assads are no prize and they’re Iranian puppets, but shoving them out would give the Brotherhood yet another country and its sizable collection of weaponry.

All that is bound to make 2012 an ugly year in its own right, especially if the Obama Administration continues allowing the Muslim Brotherhood to control its foreign policy. For all that Time and other mainstream media outlets continue splashing the same protest pornography photos on every page, the region has become an indisputably worse place this year with the majority of moderate governments overthrown and replaced, or in the process of being replaced by Islamist thugs.

Carter can breathe a sigh of relief. In one year the Obama Administration has done far more damage than the bucktoothed buffoon did in his entire term. After 2011 we can look back with nostalgia on the days when all that an incompetent leftist in the White House did was lose one country, one canal and a bunch of hostages. Things have gotten so bad that we can safely say that Obama on a good day is worse than Jimmy Carter on a bad day.

Forget the usual end of the year roundups which focus on pop stars, dead celebrities and who wore what and when. None of that really matters. It didn’t matter four years ago. It certainly doesn’t matter now.

2011 was not the year that Steve Jobs died, it was the year that any hope that we were not headed for a violent collision of civilizations died as Western governments helped topple the few moderates and let the worst have their harvest of power.

Will that be considered a bad thing in the long run? It’s hard to say. What Obama did was speed up the date of an inescapable conflict. A day when it will no longer be state-supported terrorists setting off bombs, but when much of the Muslim world will look like Iran and will openly declare that they are at war with us. That was almost certainly bound to happen anyway, but bringing the day forward by ten or twenty years means that we will be less weaker than we might have been when it happens.

Evil has a way of destroying itself, and in his own backward way, Barry Hussein may have helped save civilization. It will be a long time before we know for sure, but giving the Brotherhood what it wanted before they were ready for it, and before we are so completely crippled by the left’s political correctness that we are left helpless, may be our best hope.

2011 was the year we lost Afghanistan, Egypt, Turkey, Tunisia and many others, but it should not be the year that we lose hope. For all that the bad guys have been gaining and domestic prospects don’t look good, the bad guys have a way of destroying themselves. Give evil its head and it will kill millions, but it will also self-destruct in a spectacular way. Even when it seems as if we have run out of productive things to do, it is instructive to remember that there is a Higher Power in the destinies of men and that the aspirations of evil men to play at being gods eventually leads them to complete and utter ruin through their own arrogance.

But 2011 is also a reminder that the world cannot afford another year of Obama. That it cannot afford the appeasement, the destructive policies or the post-American politics that have made his regime the worst administration in this country’s history. 2011 may be the year that we lost the Middle East, but let’s work to make 2012 the year that this country

3 thoughts on “2011: The Year Obama Lost Afghanistan, Iraq, Egypt, Tunisia, Morocco, Yemen, Lebanon and Most of the Middle East”