I would have suspected this even if they had not reported it, but now that it’s been reported, we can make it official. The people doing the shooting in the streets of Damascus areÂ forces loyal to Iranian President Mahmoud Ahmadinejad and to Hezbullah leader Hassan Nasrallah. Â (Carl in J’lem)

I never had any doubt about it. But that Jewish dhimmies ran and paid for the restoration of this temple of hate is infuriating. 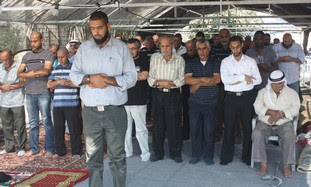 I trust that many of you remember theÂ Tuba Zanghariya mosque fireÂ back in October, and all the Israeli politicians tripping over each other to apologize to the ‘Israeli Arabs’ and to blame the evil ‘settlers’ for another ‘price tag’ attack. If you don’t read French, you probably don’t know that the crime has been solved. I know you’ll all be shocked to hear that no ‘settlers’ were involved.Â The Tuba Zanghariya mosque was burned down by IslamistsÂ (link in French).

ArabicÂ news sitesÂ have been showing aÂ series of photosÂ of an Arab man supposedly deliberately run over by an Israeli truck near Hebron: