From the (pro-Hamas)Â Palestine InfoÂ site via the Elder of Ziyon: 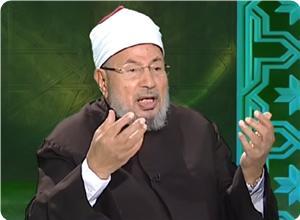 Head of the international union for Muslim scholars Sheikh Yousuf Al-Qaradawi called for Arab popular moves to protect the Aqsa Mosque andÂ confront the Jewish attempts to defile it.

In a press release issued on Monday by Al-Quds international foundation, Sheikh Qaradawi stressed that the Aqsa Mosque isÂ a red lineÂ and the Muslims would not stand idly if the Jews repeated theirÂ attacksÂ on the Mosque.

He urged the Palestinians in their occupied land and the Arab peoples in neighboring countries, Egypt, Jordan and Syria, to rise up in defense of the Aqsa Mosque and liberate it from the Jewish occupation.Here are the rules so you can understand the particular logic of Qaradawi and a billion of his coreligionists:

When JewsÂ peacefullyÂ visitÂ something consideredÂ a Muslim holy place, it is incitement, defilement and desecration and a reason to call for millions of people to violently protest.

But when MuslimsÂ destroy and co-optÂ Jewish holy places, it is theÂ exerciseÂ of basic Muslim human rights.

See how neatly symmetric and fair that is?

Last time we heard from Qaradawi he had some serious problems with Russians & Chinese:

Yousuf Al-Qaradhawi Calls to Boycott Russian and Chinese Products, States: They Are the Enemies of the Islamic Nation Â (MEMRI)

One thought on “Al Qaradawi's Obsessions”