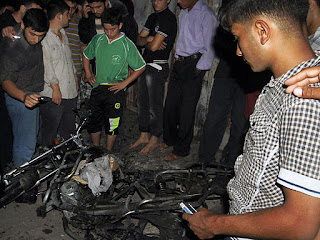 Two men were killed and another two critically wounded on Sunday in an Israeli strike on central Gaza, Palestinian medics said in what was the third deadly raid in 24 hours.

The incident occurred just east of Deir al-Balah, with the Israeli military confirming it had targeted “a terrorist rocket squad.”

Ashraf al-Qudra, spokesman for theHamas-run health ministry, said the strike had initially killed one man and left three others in critical condition, but one of the wounded died shortly afterwards.

“Two people were killed, one of those who was critically wounded died of his wounds,” he told AFP.

He named the victims as Ezzedine Abu Nasira, 23, and Ahmad Fatayer, 22, both of whom were from Deir al-Balah. Witnesses said the strike targeted a motorcycle, and said thatÂ both men were militants.

Qudra said both of those wounded in the strike were civilians.

Qudra and the Gaza health ministryÂ are lyingÂ – they were both from the Saladin Brigades of the Popular Resistance Committees, asÂ Ma’an reported.

An Israeli army spokeswoman confirmed there was a “targeting of a terrorist rocket squad” which had just fired a rocket at southern Israel.

“They had just fired a rocket at Israel which hit the area of the Eshkol regional council,” she said. No-one was injured on the Israeli side.

According to the army, more than 500 rockets have hit Israel since the start of 2012, more than 40 of which were fired in the first two weeks of October.

It was the third deadly Israeli raid within 24 hours.

On Saturday night, the air force targeted a motorcycle in the northern town of Jabaliya,Â killing a top Salafist leader and a fellow militant.

Several hours later, warplanes targetedÂ two militants from the armed wing of the Popular Front for the Liberation of Palestine (PFLP) in the southern city of Khan Yunis, killing one and critically wounding the second.

Again, it is amazing to kill five people from airstrikes in a crowded urban area without killing any civilians.

Not to mention how impressive Israeli intelligence remains in Gaza to pinpoint the right people.

Not sure why Ruth Pollard puts jihadists in exclamation marks; she herself identifies them as jihadists, so Â are we to doubt how they Â see themselves?

N A deadly cycle of targeted assassinations and retaliatory rocket fire, five Palestinians were killed and more injured in Gaza at the weekend, while militants fired dozens of rockets into southern Israeli towns forcing terrified residents to flee to bomb shelters.

Israeli air strikes targeted 47-year-old Hisham Saidani, a resident of Bureij refugee camp in Gaza and a man Israel describes as one of the founders of the Hashura Council of the Mujahideen terrorist organisation.

The council – operating under the ”Global Jihad” umbrella – was ”involved in significant terror activity against Israeli civilians and IDF soldiers and has been a promoter of radical Salafi ideas and jihad”, a statement from the Israeli Defence Forces said.

A second man – also described by Israeli sources as a militant – was killed in Sunday’s attack. ”Saidani had been planning a complex attack to be carried out along the Sinai border, a collaboration between Gaza-based militants and Salafi operatives in Sinai,” the IDF said.

Hamas described Saidani as heading the Tawhid and jihad (One God and Holy War), a group with an Islamist ideology shared by al-Qaeda.

Another man – also described by Israel as a ”Salafist activist” – was killed in an Israeli Air Force attack on Jabalya that injured two passers-by, including a 12-year-old boy, sources inside Gaza said, while in a third air strike Izz Addin Abu Nusiera, 23, and Ahmad Abu Fatayir, 22, were killed.

In retaliation, militants in Gaza fired rockets into the Eshkol area, which exploded in open fields, causing no injuries or damage.