Â “It must be clear that this is the last time we will give in. They must learn to have respect for Italian laws.”

A month ago, around a hundred North-African immigrants, lodged in a hotel in the small town of San Giovanni Incarico, “in expectation of the status of political refugees”, occupied the town council, demanding that they be given a daily allowance.

The mayor, Antonio Salvati, vainly tried to explain to them that they were not provided with a daily allowance because all their needs were taken care of (lodging, meals, clothes, laundry service, all paid for by the Italian taxpayer). The immigrants didn’t want to hear any of that and built a barricade in front of the town council by throwing together sewage gratings. Â (Cheradenine Zakalwe has more!) 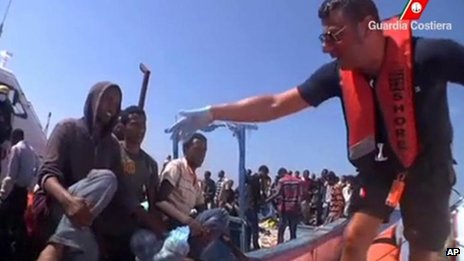 More than 400 African migrants have arrived on the Italian island of Lampedusa over the past three days.

Over the weekend Italian coast guards rescued around 350 migrants – mostly from Tunisia and sub-Saharan Africa – near Lampedusa from two boats. A further 81 arrived on Monday.

Lampedusa and Malta are the nearest gateways to Europe for thousands of African migrants.

Lampedusa lies about 80 miles (120km) from Tunisia, while Malta is about 220 miles (355km) from the Libyan capital Tripoli.

Many of the migrants arrive on overburdened and poorly equipped wooden boats.

OverwhelmedOn Tuesday Italian media reported that two policemen were taken to hospital after being injured in protests by a group of 14 Tunisian migrants in the town of Ragusa on Sicily.

The men were being held at a detention centre in Ragusa when they climbed the roof and began throwing glass and other objects, according to Italian news website Adnkronos.

Last year tens of thousands of refugees fled the uprisings in Tunisia and Libya by sea, overwhelming Lampedusa and Italian immigration services.

A large number of Somalis also try to leave Africa via the Mediterranean, to escape conflict and famine.

Last week about 160 migrants from Somalia and Eritrea were seized by Malta’s navy, who also recovered two bodies from the sea.

In April, a Somali athlete who competed at the 2008 Beijing Olympics reportedly drowned when the boat she was travelling in sank.

Samia Yusuf Omar was trying to cross from Libya to Italy.

3 thoughts on “Our Humanity is Killing Us!”