Beginning of the End in England? (Pamela Geller via ROP)

BEDFORD The leader of the far-right English Defence League is set to spend Christmas in prison after a judge rejected an application for bail. Stephen Lennon, 29, who also uses the name Tommy Robinson, was arrested at Heathrow Airport on October 20 on suspicion of possessing a false passport. He tried to use a passport in the name of ‘Andrew McMaster’ to enter the United States on September 10 this year, Southwark Crown Court heard.

The Baron from the Gates of Vienna is connecting the connections:

In the midst of the current political crackdown in Britain, it’s important to remember what the crackdown is aimed against.

The authorities don’t show their iron fist so blatantly unless they are afraid, deeply afraid, and the political establishment is very much afraid of the prospect of being unseated by someone outside the current order. The three major parties â€” Labour, the Lib Dems, and the Tories, often known as “The Triad” â€” intend to make sure that no one attains any significant office unless they rise through the ranks of one of those three parties in the traditional way.–More on the People’s Candidate

The same in Germany:

As mentioned the other night in the news feed, the past week has seen near-simultaneous crackdowns on the English Defence League (UK), GÃ©nÃ©ration Identitaire (France), and the Pro-Movement (Germany). Whether there was any co-ordination of these separate operations by the labyrinthine bureaucracy of the European Union is open to question. But there is no doubt that a new season of political repression in Europe has begun, and we can expect to see more of the same.–Â Read more Â»

An Update on the Political Crackdown in Britain 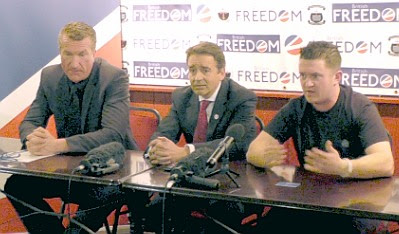 4 thoughts on “The Establishment is Getting Desperate”