An update from Pamela Geller:

Be wary of the enemedia narrative in Burma. They are aligned with the jihad force.Â  The sharia-compliant media always takes the side of the invading force. Bosnia, Syria, Gaza, Egypt, Turkey, the Philippines ….. 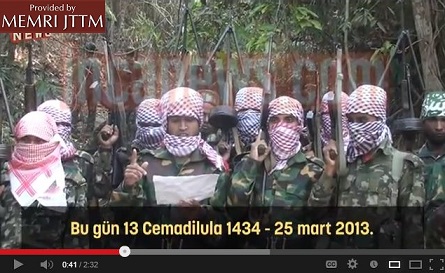 On August 19, 2013, a Burmese jihadi group released a YouTube video in which it urged the mujahedeen worldwide to join them in their fight against the government and the Buddhist inhabitants.

The Ministry of Information said the sectarian unrest in a central village of Kanbalu followed the attempted rape of a Buddhist woman by a Muslim man on Saturday evening.At least 12 people have been arrested afterÂ a renewed bout of religious violenceÂ in Myanmar’s northern Sagaing region in which dozens of homes were set ablaze.

According to the statement, after the man was detained, about 150 villagers and three Buddhist monks gathered at the police station, demanding he be handed over to them.

As usual, the Buddhists are to blame because they have the audacity to defend themselves.

Calm was restored on Sunday. Witnesses said some Muslims fled to neighbouring villages or sheltered in a Muslim school.

A Muslim eyewitness said the cause of the unrest appeared to have been an argument between a young Muslim man and a Buddhist woman, but he denied the man attempted to rape the woman.

Myanmar has been grappling with sectarian violence since the country’s military rulers handed over power to a nominally civilian government in 2011.

The unrest began last year in the western state of Rakhine, where Buddhists accuse the Rohingya Muslim community of illegally entering the country and encroaching on their land.

Last week watchdog Physicians for Human Rights said Myanmar risked “catastrophic” levels of conflict with “potential crimes against humanity and/or genocide” if authorities failed to stem anti-Muslim hate speech and a culture of impunity around the clashes.

Rights groups have accused authorities of being unable or unwilling to contain the unrest, which has left about 250 people dead and more than 140,000 homeless. The vast majority of victims have been Muslim, who make up at least four percent of the population. Myanmar has rejected the claims.

4 thoughts on “Fresh Riots in Myanmar”