I am no great supporter, but they certainly have my blessing on this one.

Fearless … and topless: Femen activists to bring ‘sextremism’ to the UK

Femen ambushed Putin and invaded a catwalk. Now they plan to shock Britain into action over female genital mutilation 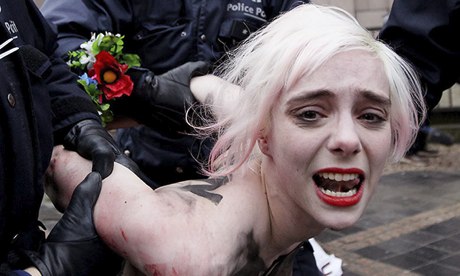 A Femen member is arrested outside an EU-Russia summit attended by Vladimir Putin. Photograph: Olivier Hoslet/EPA

They started out in Ukraine, established a thriving headquarters in Paris and last yearÂ succeeded in ambushing a startled Vladimir PutinÂ during a visit to a German trade fair. Now the controversial activists ofÂ Femen, notorious for their topless protests on issues such as prostitution, abortion and the wearing of the hijab, are planning to target Britain.

In London to promote a documentary on the group’s activities, founder member and spokesperson Alexandra Shevchenko saidÂ FemenÂ UK would focus on issues such as female genital mutilation (FGM), forced marriage and the sex industry. “No one is talking about FGM in England,” she said. “People assume it is too violent and extreme to exist here, that it only happens in Africa and the Middle East, but the UK has some of the highest levels in the west.”

The setting up of a new British arm of Femen’s operations is likely to generate mixed feelings among indigenous feminist groups. A succession of high-profile topless protests since the group’s formation in 2009 was greeted with bafflement and amusement by many observers, although given the heavy-handed treatment often meted out by bodyguards and police there is no doubting its members’ courage.

According to the 25-year-old Shevchenko, Femen has no formal leadership, but hopes to establish a “homegrown” UK branch, built up from a base of British feminist activists, with whom she is in discussions this weekend.

Many Femen members have been exiled from Ukraine. From their base in Paris,Â where they made headlines recently by invading the catwalk at Paris fashion week, they hope to visit London to help train recruits for membership, which is about more than signing a form.

“Becoming a member of Femen takes more than just a few days,” said Shevchenko. “You must be physically and psychologically prepared. Of course, you have to support our ideology as a starting point, but it is also a question of being fit in your body and mind to fight – to be arrested, struggle with police and jump fences. Our main enemy is patriarchy and its three manifestations – dictatorship, religion and the sex industry. These issues are universal.”

Shevchenko attributes Femen’s success in France, where it has its largest membership, to the long francophone tradition ofÂ protestÂ and organised resistance. Can the same rebellious potential be tapped this side of the Channel?

“Britain is separate from the rest of the European Union and has its own social and historical character,” said Shevchenko. “Unlike in Ukraine, there has already been a sexual revolution here and people know whatfeminismÂ is. But I don’t think our campaigns will be very different. Femen UK will be about action. Of course, there is no obvious dictatorship here, but rightwing extremists are on the rise in the form of nationalism all over Europe. Likewise, we have the conservative influence of Christianity and Islamism, and of course the sex industry is everywhere.”

In the summer of 2012,Â the group staged a protest at London’s City Hall against the participation of Islamist regimes in the Olympic Games, before being apprehended by police.

“Of course, it is not the Ukraine or Russia – the secret service will not try to kill you here,” she said. “But there is not a big difference ultimately, because if you are trying to do sextremist actions that target important people, you will be arrested, recorded, tracked and banned from future protests.”

Femen’s campaigns against Islamism have incited hostility from Muslim and non-Muslim women, alongside charges of xenophobia and cultural imperialism.

Femen UK would, according to Shevchenko, be an addition to, not a substitute for, other forms of feminist campaigning in Britain. She claimed that there is an appetite among young women all over Europe for a new, more dynamic form of resistance.

“There is real feminist pride in the UK, which is why Femen appeals to women. But many are becoming disappointed with classical feminism, which is like library feminism,” she said. “Of course, we still need those who make theory, but feminism should be like an army, with different departments. Femen is like the commanders taking the frontline to remove the mask and show the ugly sexist face of society.”

The UK premiere of an acclaimed documentary entitledÂ Ukraine is Not a Brothel, by Australian director Kitty Green, was screened as part of the 2013 BFI film festival. The film madeÂ international headlines in SeptemberÂ following its world premiere at the Venice film festival, where it revealed the role of a Ukrainian man, Victor Svyatski, as the alleged leader of Femen.

2008Â Formed in Khmelnytskyi in western Ukraine. Membership now extends across the world. According to its website, its purpose is “sextremism serving to protect women’s rights”.

September 2013Â Victor Svyatski is “outed” as the mastermind behind the group. It is alleged he handpicked the most attractive women “because the prettiest girls sell papers”. A Liverpool model reportedly punches two Femen protesters who had burst on to the catwalk at Paris fashion week.

2 thoughts on “Femen vs FGM”