Four people have been killed in Kenya’s port of Mombasa during clashes between police and those angered at the killing of a Muslim cleric, the Red Cross says.

Seven people have also been wounded during the disturbances, while a church was set alight.

The cleric Ibrahim “Rogo” Omar and three other people were shot dead in Mombasa as they drove home on Thursday night after preaching.

It comes two weeks (?) after the deadly attack on a Nairobi shopping centre.

Somali Islamist group al-Shabab, which is part of al-Qaeda, said its militants stormed the Westgate mall in the capital in retaliation for Kenya’s military involvement in Somalia.

Mr Omar’s killing is similar to that of Aboud Rogo Mohammed last year, which sparked days of rioting by Muslims in Mombasa.

Mr Rogo was alleged to have links with al-Shabab and some Muslims accused the Kenyan security forces of killing him – an allegation they denied.

Ever seen a guilty Muslim?

“They should tell us the truth about Westgate, not kill innocent Muslims in Mombasa”–Abubaker Shariff Ahmed, Cleric known as Makaburi (He would have you believe it was the Jooozzz!)

Four dead as Muslim Brotherhood supporters clash with riot police in Egyptian capital and other cities.

Continued:
‘Died on the spot’
Continue reading the main story

The trouble began after Friday prayers when protesters began stoning cars and lighting bonfires as they clashed with police.

At least one of those who died of their wounds in hospital had been shot, according to the Kenya Red Cross.

Police said they used tear gas to disperse the protesters who also set fire to a Salvation Army church in the Majengo district, a middle-class area of the city, which has a large Muslim population.

Eyewitnesses said police were also firing in the air to try to disperse the demonstrators.

A BBC journalist heard sounds of gunshots being fired while on the phone to a local reporter.

Mombasa city police chief Kipkemoi Rop said 24 people had been detained, as the force would not tolerate “unruly youth taking over the town”, AFP reports.

Correspondents say the Masjid Musa Mosque, which is on the same street as the Salvation Army church, is known to attract some radical followers. 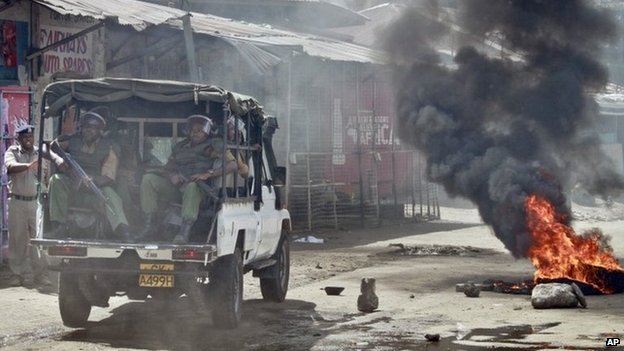 The trouble began after Friday prayers in the district of Majengo in Mombasa. Four people died of wounds sustained in the clashes. 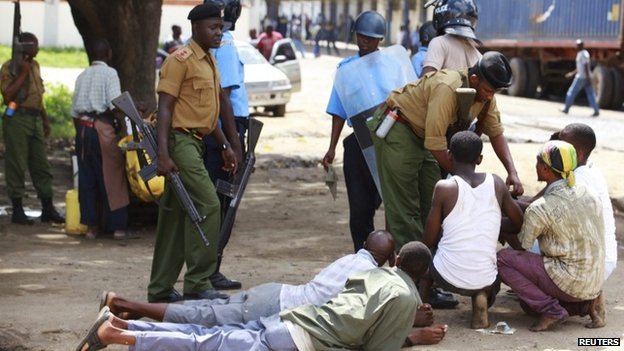 Some of the protesters were detained by police, who had been on high alert since Thursday’s killing of Muslim cleric Ibrahim “Rogo” Omar. 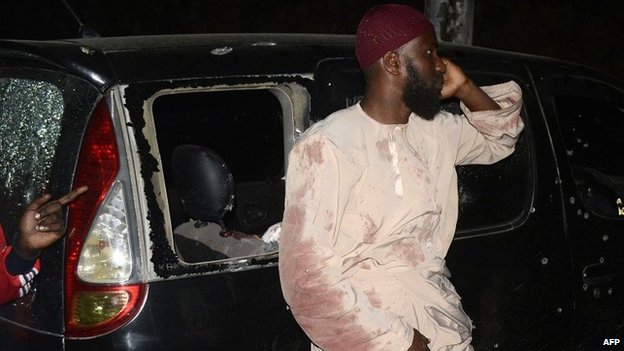 Salim Abdi was the only person in side the car to survive the attack, which killed Mr Omar and three others. 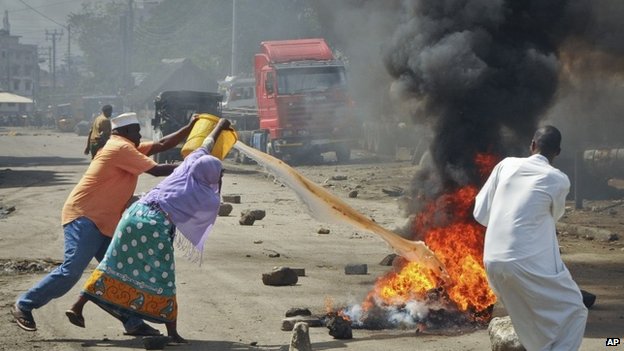 Tyres were burnt and stones thrown on one of Majengo’s main roads during the protest. 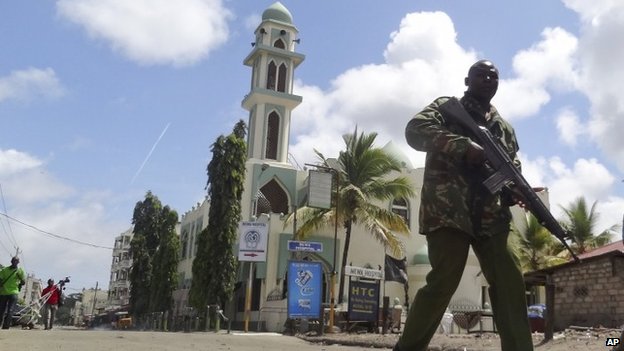 Mr Omar preached at the Masjid Musa Mosque, which is on the same road as the Salvation Army church, which was set alight by protesters.

Muslim cleric Abubaker Shariff Ahmed, known as Makaburi, said the police were behind the killings of Mr Omar and the others.

“They should tell us the truth about Westgate, not kill innocent Muslims in Mombasa,” he told reporters at the scene of the wrecked car.

Makaburi has been sanctioned by the UN Security Council for being “a leading facilitator and recruiter of young Kenyan Muslims for violent militant activity in Somalia”.

“Sheikh Ibrahim was not at Westgate, he had nothing to do with Westgate, nor were the other people in that car. Why are they killing them here?” the cleric said.

The police in Mombasa have denied involvement in Mr Omar’s killing.

“The police have nothing to do with the shooting. That’s not how we operate,” Reuters news agency quoted Robert Kitur, Mombasa County police commander, as saying.

The car smashed into the verge off the main coastal road north of Mombasa, not far from where Mr Rogo was shot dead in his vehicle in August 2012.

The vehicle’s windows were shattered in the attack and its doors riddled with bullet holes.

Salim Abdi was the only survivor of the shooting and said “all four others I was with in the vehicle died on the spot”.

“There were gunshots and the vehicle veered off the road, I don’t know how I walked out of the vehicle alive,” AFP quotes him as saying.