The Zionist Pigs are back and forcing Arabs to shoot each other! 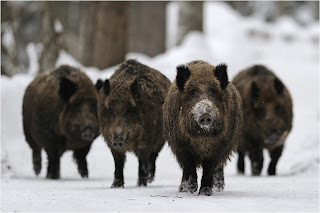 A Palestinian youth was accidentally shot and killed by his cousin on Saturday night as a group of young Palestinians attempted to defend their village against a herd of wild pigs released by Israeli colonists during the snowstorm that has hit Palestine since last Tuesday.

19-year-old Yousri Mohammad Nayef Al Deek, from the village of Kafr Al Deek, near Salfit, was shot in the heart by a bullet fired by his cousin and neighbour Majd Ahmad Abdul Karim Al Deek.

Local sources in Kafr Al Deek told Gulf News that Israeli colonists have used the bad weather to set free a group of the wild pigs to attack the Palestinian farms and properties in the village.

In other news:
The sources added that a group of Palestinian youngsters armed with old rifles rushed to fight the wild pigs but the rainy and snowy weather did not give them clear vision. During the frenzy, the victim was fatally shot.

The sources maintained that it was an accidental death and that the killer was getting ready to receive his father who is scheduled to be released from Israeli prison on Sunday after serving years of imprisonment.

The sources allege that Israeli colonists normally use such weather conditions, during which Palestinians remain indoors, to release wild pigs in Palestinian neighbourhoods to ensure maximum damage to Palestinian farms.Yes, Jews raise wild boars and wait for a once in a hundred year snowstorm to release them to damage crops that are inaccessible in the snow. But the boars also cause Arabs to go into a frenzy with old rifles and start shooting wildly, and of course some will end up dead.

The Zionist Pig ethnic cleansing project is a success!