Make that 300 million. 500 million. A billion. Whatever it takes: the world belongs to allah and his profit, right? Only infidel sons of apes and swine can prevent the muslims from taking what’s rightly theirs:

After banishing Spain’s Jewish population in 1492 Queen Isabella and King Ferdinand turned their attention to its Muslims. But how many left and how many stayed? 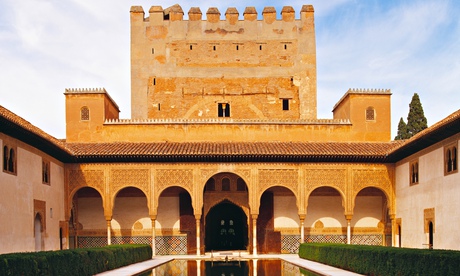 The Alhambra in Grenada, Andalusia, was built by Moors beginning around AD889, who officially stayed in Spain for several centuries. Photograph: Shaun Egan/Getty Images

Not built by Moors: built by the enslaved peasants of Spain.

Perched dramatically on a rocky mountain, the small city of Toledo overlooks a bend in the Tagus river. Within its maze of cobblestone streets are buildings that once housed mosques, churches and synagogues, hinting at the varied cultures that once called this medieval city home.

Earlier this month, about 50 miles away from Toledo, the Spanish government sought to strengthen its ties with one of these cultures, announcing plans to fast-track the naturalisation ofÂ Sephardic Jews, whose ancestors were expelled five centuries ago fromÂ Spain. [and guess WHY they were expelled? Spain was ruled by Muslim invaders for 800-years]

The bill, said the Spanish government, would “correct a historical wrong”. The legislation has yet to be approved by parliament, but already consulates in Tel Aviv and Jerusalem said they have been flooded with requests for information. Up to 3.5 million people around the world are thought to have Sephardic – Hebrew for “Spanish” – Jewish ancestry.

Now the descendants of another group who figured prominently in Spain’s colourful past – before also being expelled – say it’s only fair that the same right of return be extended to them.

You can’t reward the invaders and slavers who were expelled after 800 years of war with giving them ‘rights of return’.

Shortly after banishing the country’s Jewish population, Queen Isabella and King Ferdinand turned their attention to Spain’s Muslims, forcing them to covert to Christianity or face expulsion. The Muslims who converted, known as Moriscos, often did so in name only, holding on tightly to their customs and traditions.

In the early 1600s – nearly 120 years after Jews in Spain were told to leave – the Moriscos were also expelled. An estimated 275,000 people were forcibly resettled, the majority of them heading to Morocco, some to Algeria and Tunisia.

A group representing Moriscos in Morocco recently sent a letter to Spain’s King Juan Carlos asking the country to make the same conciliatory gesture to the descendants of Muslims. Speaking from Rabat, the president ofL’Association pour la MÃ©moire des AndalousÂ strongly criticised Spain’s double standard in offering to naturalise the descendants of Jews ousted from Spain but not Muslims. The Spanish government “should grant the same rights to all those who were expelled”, Najib Loubaris told news agency EFE. “Otherwise the decision is selective, not to mention racist.”

Islam is not a race. Islam has ho claim other than the one of conquest, demanded in Koran, sira and hadith. Spain might have to go to war over this.

The Spanish government’s offer to Sephardic Jews was “very positive”, said Loubaris, in that it showed an acknowledgment of “guilt for the expulsion that the Spanish state committed against its own citizens”.

Loubaris estimated that 600 families in Morocco can trace their origins to Spain. Most no longer speak Castilian Spanish, he said, but their connection to Spain is evident in their music, architectural styles and gastronomy.

There is no music in Islam.

In Spain,Â the Junta IslÃ¡micaÂ reinforced the vivid links between the expelled Muslims and Spain. To this day, across the country there are families “who can demonstrate their lineages, who can show that their relatives were expelled hundreds of years ago,” said Muhammad Escudero Uribe.

Whether it is citizenship for Muslims or Jewish descendants, he said, “the cause and historical background is the same. And for this we want this same right to be extended. From a legal standpoint, it’s only just.”

Nothing is the same. The Jews were dhimmies, and their legal standpoint is the sharia, which is irrelevant to Spain.

His organisation has spent years lobbying the Spanish government to naturalise the descendants of Muslims. In 2006, a left-wing party in the autonomous region of Andalusia proposed a bill that would recognise the rights of Muslims who were expelled. The bill never made it to a vote. “It doesn’t seem that the government shares our position,” lamented Escudero Uribe.

Its not? Too bad. The Muselmaniacs should be told to piss off.

The push for citizenship rights is just one part of a larger campaign being waged to raise awareness of Islamic influence in Spain, said Antonio Manuel RodrÃ­guez Ramos, a law professor at the University of CÃ³rdoba. “We’re the only place inÂ EuropeÂ that has estranged itself from its past,” he said.

Arabs came with nothing but hatred and left nothing of value behind. That’s the truth.

The right of return for those with Spanish Muslim ancestry would be “symbolic rather than practical,” he said. While Sephardic Jews may be able to provide proof of their lineage through their surnames, their language or through certification from the federation of Jewish communities in Spain, setting similar criteria for the descendants of Spanish Muslims would be nearly impossible. “But the gesture would go a long way in repairing centuries of forgetting.”

How will the Arabs repair and compensate us for the exploitation, the piracy and the slaves they robbed during their reign of terror?

Since the Spanish government’s announcement, columnists around the world have mused on what prompted Spain to reach out to Sephardic Jews. Michael Freund, writing in The Jerusalem Post, called the decision “decidedly ironic”. He explained, “the expulsion happened in part because Spain wanted Jews’ assets, and now they are welcoming Jews back for the same reason”.

Others, such as the Portuguese lawmaker who drafted a law similar to Spain’s that will eventually allow Jews expelled from Portugal five centuries ago to return, insisted that the experiences of Muslims and Jews on the peninsula couldn’t be compared. “Persecution of Jews was just that, while what happened with the Arabs was part of a conflict,” JosÃ© Ribeiro e Castro told the Jewish Telegraphic Agency.

Antonio Manuel RodrÃ­guez Ramos suggested another reason. The hundreds of thousands of Muslims who left in the early 1600s couldn’t possibly have been the only Muslim descendants in the country, he insisted. “The majority of these people didn’t leave when they were expelled,” he argued. “They stayed and they created a culture that can be described as most authentic and most Hispanic.”

Extending the right of return to the descendants of Spanish Muslims would shine a spotlight on a truth that most in Spain would like to ignore, he argued. “The danger is that we will have to recognise that the majority of the Spanish population is of Muslim descent,” said RodrÃ­guez Ramos. “It’s an effort to hide our history, to hide our memory.”

The guy is deluded. Or a convert.

– The Moors introduced a variety of new crops to the Iberian peninsula including oranges, lemons, cotton and sugarcane. They also introduced rice, a key ingredient in paella, one of Spain’s most well-known dishes.

No way. The Moors were raiders and herdsmen, not agriculturalists.

– Arabic had a profound influence on Spanish, with linguists arguing that thousands of words of Arabic origin are used today in Spain. Examples include alcalde (mayor) and alfombra (carpet).

– The architectural influence of the Moors remains the most recognisable legacies in modern-day Spain, from the Mezquita de CÃ³rdoba to the Alhambra palace in Granada. Moorish architecture is defined by slender columns, horseshoe arches, serene courtyards and geometric patterns.

None of it came from islam or Muslims.

– The tangled, narrow street plans seen in many southern Spanish towns date back to Moorish times.

– The guitar, along with flamenco’s signature cry of olÃ©, are believed to be derived from early versions of the instruments brought by the Muslims to Spain.

Totally false. Music is ‘haram’, forbidden in Islam. Â “Ole” is not ‘allahu akbar,’ and if it was the case that Â Arabs played guitar we would see a lot of this all over the Arabic/Islamic world. Its all BS. Arabs have given us nothing but plunder, jihad and slavery.Â

7 thoughts on “Here we go: "its racist" not to allow 100 million Morisco descendants to invade Spain”