Not to worry, they will always be welcome in Obummer’s white house.

An Egyptian court on Tuesday banned all activities of Hamas in Egypt, a judge said, in another sign that security forces plan to squeeze the Palestinian militant group that runs the neighbouring Gaza Strip.

Hamas is an offshoot of Egypt’s Muslim Brotherhood, which has been declared a terrorist group by Egypt’s army-backed government and has faced a security crackdown since the military ousted one of its leaders, Mohamed Mursi, from the presidency last July. 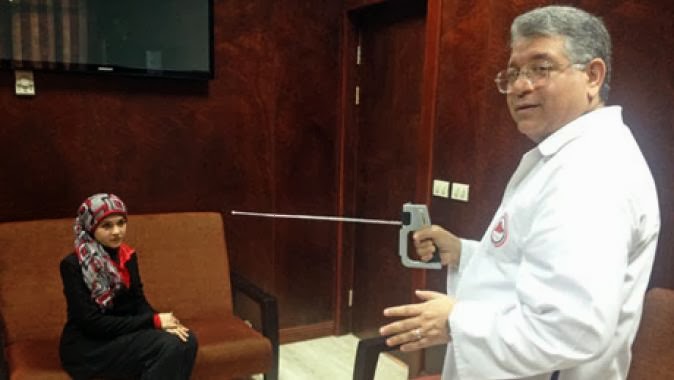 Last weekÂ I reportedÂ about a device that the Egyptian Army introduced which supposedly, non-invasively, cured hepatitis C and AIDS. (EoZ)

Scientists in Egypt as well as elsewhere were more than skeptical, noting that there had been no peer-reviewed papers or indeed any real scientific proof for the claims.

Commenters pointed out the similarities between this device and the infamousÂ ADE 651, a fake bomb detector that a fraudster British businessman sold to many Middle East countries at a huge profit.

Al Wafd, a secular and pro-army Egyptian newspaper, actually defends the device, and complains about how it has been “politicized.”

The paper points out that Alexander Graham Bell, when he invented the telephone, had no idea how much it could change the world, and did not take into account international standards for inventions (whatever that meant in 1876.)

This Egyptian device, we are told, is just like the Bell’s telephone. It is a wonderful invention, and the only problem is that the inventors didn’t follow normal scientific protocol. But in a couple of generations, this cure for AIDS will be thought of the same way the telephone is thought of today!

Then, inevitably, the newspaper descends from lunacy into antisemitism.

Amr Simbel, a “specialist in political and historical studies,” says that the wave of ridicule about the device fits exactly into the secret Jewish plan to take over the world as stated in the Sixth Protocol of the Protocols of the Elders of Zion, which stresses the need to expel all intelligent gentiles from the face of the earth , and ridicule their most important inventions to ensure Jewish world domination.

The Protocols, in turn, got this idea from the Kabbalah, which says not only to to mock the achievements of Gentiles, but also to shed their blood and steal their money.

Am I unwittingly invoking Protocol 6 by pointing out that any Egyptian that believes a word in this article is an idiot? Is al Wafd secretly run by Jews who are trying to bring the average Egyptian’s IQ down by about ten points?

One thought on “Egypt bans all activities of Hamas”