Hundreds of commemorations will take place to remember Australian sacrifice during World War OneÂ (1914-1918) butÂ only one that will remember life taken on Australian soil. But due to political correctness, I am not sure there will be any commemoration at all.

In a little over four months, Australians will begin commemorations to mark the 100thÂ anniversary of the First World War. These events will remember the tremendous sacrifices endured by our forbears a century ago.

And they are well worth remembering. Australians today are lucky indeed that they have not had to suffer them. Nearly 40 per cent of the male population aged between 18 and 44Â put on a uniformÂ between 1914 and 1918. Every second one of those men was killed or wounded.

To put it in today’s context, if the house you lived in didn’t have an empty bed as a reminder of a husband or son gone to war, one either side of you almost certainly did. And after four years of fighting, if you leaned over your fence or strolled across the road to speak to any of your immediate neighbours, the chances are that one of those families would outline the story of a brother or father wounded in battle. Statistically, every 16thÂ home had a bed that would never be used again.

The scale of loss was enormous. At theÂ Battle of FromellesÂ on 19 July, 1916, over 2,000 Australians died in a single night. The war in Afghanistan would have to rage for another 650 years to take this grim toll on Australian life.

It is little understood that Australian forces have not fought battles as big as those in late 1917 and 1918 in any conflict since. As such, it is important for us to remember the impact of war on the 4.5 million or so Australians who lived through those days. Their endurance through adversity and then the tragedies of the Great Depression and World War Two has directly led to the safe and prosperous nation that we enjoy today.

So I look forward to the ceremonies that will begin in early August this year.

One of the first will be at Fort Nepean to commemorate theÂ opening shot of World War OneÂ fired by any Commonwealth nation. On the afternoon of 5 August, 1914, a 6 inch gun at Fort Nepean fired a warning shot across the bows of a German freighter trying to escape Port Phillip Bay. Of interest, a gun at this same location also fired the first Commonwealth shot of World War Two, although this time it was sent as a warning to an Australian vessel that had not properly identified itself.

My father is the chairman of the committee organising the ‘First Shot’ commemorations at Fort Nepean. I wish him and all involved the very best as they plan this important event. After it is over, there will be many other ceremonies to follow. I caution those who may feel fatigue at what will be four years of anniversaries to remember that 100 years ago families were receiving unwanted telegrams shortly after each of the events we will remember. Â And there are many Australians alive today who never had the opportunity to meet their great uncles because they lie buried in France and Belgium, Turkey or in the Middle East.

However, in the hundreds of commemorations that will take place to remember Australian sacrifice during World War One, there is only one that can remember life taken on Australian soil. But due to political correctness, I am not sure there will be any commemoration at all.

I am referring to theÂ Battle of Broken HillÂ which took the lives of four Australians, none of whom were in uniform, and wounded seven more.

It started, as these things mostly do, with the lilting sound of “Allahu Akbar” ringing out on the outskirts of Broken Hill. The date was 1 January, 1915. Shortly thereafter, two men began shooting at a train taking 1,200 men, women and children to the annual New Year’s Day picnic.

What was supposed to be a family day of fun was turned into a raging chaos of carnage.

The two perpetrators were Gool Mohamad and Mullah Abdullah. And no, don’t judge them by their names. Instead, just read their suicide notes, written as they prepared for their lead role and walk-on part in the war in Australia.

Mullah Abdullah’s note said that his actions “were in obedience to the order of the Sultan of the Koran” and he signed it off with an oath to Allah and his big book of peace. Â As he was the local imam of theÂ first mosqueÂ ever built in New South Wales, it’s fair to say that Mullah Abdullah knew a little more about the Koran and Allah than your average new-age journalist writing fairy tales about the religion of peace today.

Mullah Abdullah was also responsible for the local trade in halal meat, which had twice been shut down because he had been found guilty of butchering sheep without a license. So, in his note, Abdullah also stated that he was also going to kill the local inspector.

Now, Islamic apologists are quick to point out that Abdullah’s grudge with the inspector is proof that Islam did not really have much to do with the Battle of Broken Hill. In response, I will point out that halal lamb chops are very much part of Islamic life and that Abdullah’s disdain for the law regarding animal slaughter a century ago very much resembles the disdain that modern-day ‘Australian’ Muslims have for other laws, such as those prohibiting marriage to 12 year-old girls. And besides, the Islam Australia Network defends Abdullah’s actions because he was subject to ‘religious persecution’. In fact, it states that Muslims were placed in anÂ impossible situationÂ because they were required to obtain a license to slaughter animals, like every other Australian butcher.

The good news from Abdullah’s point of view is that more than half of Australia’s lamb chops are now halal certified. He did not die in vain, but was just the first to give his life to impose Sharia law on the rest of Australian society. And I suppose some would say it’s not a bad thing either. We don’t want any other trains coming into contact with weapon-welding maniacs crying Allahu Akbar on a warm and sunny morning.

Of course, in order to keep the peace we’ve had to hand control of meat slaughter and production to Islamic police intent on imposing Sharia law and Islamic taxes on all.

And that is a little costly in other ways. Some meat producers are coughing up toÂ $27,000 a monthÂ for the privilege of being halal certified. That fee is used to fund Islamic schools in Indonesia and the cost is passed on directly to the consumer. That’s you.

Just remember, next time you tuck into an Australian steak, there’s a good chance that you are not only paying GST, but an Islamic tax as well.

And somewhere in all of this, Broken Hill’s Mullah Abdullah can take a certain degree of responsibility.

Gool Mohamad was not an imam and, like Abdullah, he was not Turkish either. He was just the local ice-cream vendor – one of the first Mr Whippies, if you will. And just as all good horror stories seem to have an evil ice-cream man somewhere in the script, this one is no different.

That’s because Gool was a good Muslim, upset that Great Britain and the Empire was at war with the Caliphate. As one modern Islamic author has noted, some Australian Muslims felt this decision washorrendous. And other ‘Australian’ Muslims are a little more blunt. Hizb ut Tahrir stated just last year that if Anzac Day should commemorate anything, it should celebrate theÂ defeat of immoral Australian forces at the hands of the Islamic Caliphate.

I guess this kind of puts a different slant on the name of Australia’s largest mosque, standing tall and defiant in Western Sydney: the Gallipoli Mosque.

As Gool prepared to die he also penned a note. It stated, “I must kill your men and give my life for my faith by order of the Sultan”. Then Gool drove his weapon-laden ice-cream cart to the outskirts of Broken Hill and waited with his imam for a trainload of civilian targets to pass by.

By the end of the day, Gool and Abdullah were both dead. So were four civilians, including a 17 year-old girl. Seven more were wounded. It was lucky the toll was not higher.

And then, just like today, came the typically stupid response to an act of Islamic violence. As night closed in, the German Club in Broken Hill was burnt to the ground.

The Battle of Broken Hill remains the only successful Islamic attack on Australian soil. It stands out as a reminder to all that the violence of 9/11 was nothing new. It was something old – a continuation of Islamic aggression against the West since the 7thÂ century. It was also the day that World War One came to Australia.

If it is not commemorated, it will be nothing more than politically-correct censorship.

One hundred years ago, Australians were asked to endure great hardship, death and suffering. We will betray those sacrifices if we fail when asked to endure something much easier: the truth. 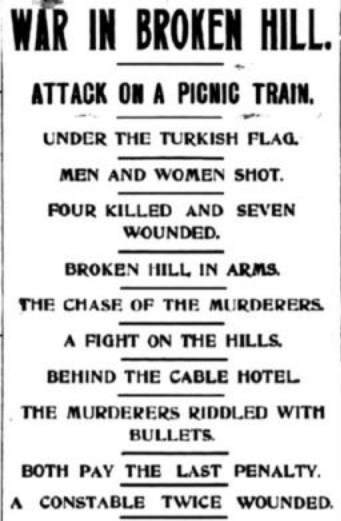 Â [Editor’s note: At that time, Australia was preparing to attack the Ottoman Empire, the perpetrators were first speculated to be Turkish, but were later identified as being Muslims from an area of the British colony of India that is now modern day Pakistan. /Pickering]
***
Bernard Gaynor has a background in military intelligence, Arabic language and culture and has returned from three Iraq deployments.