MeetÂ Mustafa al-Anzi, a Saudi Doctor Who Heard the Call to Jihad

Strangely, his family denies him the status of a “martyr”. Â Am I missing something?

A new image of the Saudi doctor who had joined the Islamic State in Iraq and Syria surfaced on Monday. Mustafa al-Anzi appears holding a large combat knife in the picture, showing that he had indeed joined the ISIS.

Al Anzi was reportedly killed on July 11 in an Iraqi military air-strike on an ISIS assembly in Mosul. Another image of Al Anzi yielding an AK-47 appeared a week ago. His brother explained to Al Arabiya News that bearing arms as doctor was necessary as he was operating in a conflict area.

Al Anzi’s family alleges he was working in ISIS field hospitals and had not been involved in combat. The family continues to claim he died while operating in a field-hospital struck by the Iraqi air-raid.

A Saudi national who had previously worked as a doctor before joining the Islamic State of Iraq and Syria (ISIS) has been killed, according to social media accounts on Monday.

It is not clear how Faisal bin Shaman al-Aanzi died was killed. But militants of ISIS, which has recently declared an “Islamic caliphate” in areas it controls between Iraq and Syria, are engaged in continuous fighting against various military forces in Iraq and Syria.

According to one account, he was blown up in a booby-trapped car, while another account said he was killed while tending to injured militants in an ISIS base which was shelled.

Aanzi may have been responding to a call issued earlier this month by ISIS’s leader and self-appointed caliph, Abu Bakr al-Baghdadi, for skilled Muslims – including doctors and engineers – to flock to its newly-declared pan-Islamic state. 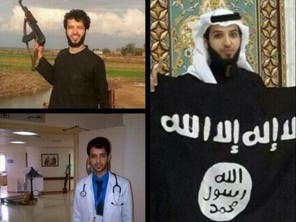 “Those who can immigrate to the Islamic State should immigrate, as immigration to the house of Islam is a duty,” said Baghdadi.

The ISIS chief added that his appeal especially applied to “judges and those who have military and managerial and service skills, and doctors and engineers in all fields.”

Although the group has for some months ruled areas of Syria under its own hardline version of Sharia law, with strict laws banning alcohol and tobacco, and harsh punishments for violators, its shock takeover of Iraq’s second largest city of Mosul in early June gave the group a firm foothold to establish its expansive pan-Islamic state.

As well as attempting to invade more territory further into Iraq and Syria, the group has set its sights on organized governance – reportedly tearing down security barriers to open roads, restoring electricity lines, and paying municipal employees.

In addition, ISIS is also reportedly issuing its ownÂ passportsÂ to the some-11,000 citizens under its rule, and has established a print and onlineÂ newspaperÂ published in different languages.

According to aÂ security analystÂ who had access to documents recently seized from the house of a senior ISIS figure, ISIS also pays and organizes itself like a corporation, with specific roles, a geographic location to work in, and salaries paid to employees.

Depending on the position filled, wages in ISIS range from $300 to $2,000 a month – a considerable amount in a country where government workers were last yearÂ reportedÂ to make only $400.

However, those wishing to illicitly enrich themselves through an ISIS position may be in for a surprise. Last month, the group executed and crucified one of its own for “extorting moneyÂ at checkpoints by accusing drivers of apostasy.”

But despite its levels of organization and structure – unusual among jihadist groups – some doubt the group will be able to sustain and govern its increasing vast swathes of territory.

Although its financial operations robbing banks and charging trucks a tax to cross its borders, the group is unlikely to have enough resources to continue operating to its current level, according to Charles Ries, a former U.S. ambassador who serves as a vice-president at the Rand Corp think tank.

“I don’t see that [the current] situation as sustainable from the economic standpoint,” Ries said, according to the website of U.S. channelÂ CNBC.

3 thoughts on “Then one day, Dr Mustafa heard the call to jihad and promptly met the virgins…”