“All this talk about Israel being behind the pain of Christians in the Palestinian Territories is nonsense. Muslims intimidate us.Â They burn our stores, steal our real estate. They build mosques beside our churches, and make sure that the calls for prayer disrupt our services.Â They attack our daughters. There are many cases of rape that have never been reported.Â Families hide it out of shame, they move away. They flee.” â€” Christian official.
Under dhimmi laws, non-Muslims under Muslim rule may not testify against Muslims, so it is virtually impossible for Christians whose lands have been stolen, or whose lives have been threatened, to appeal to the local legal system.
Apparently the story is only appealing when Israel can be blamed.

Father Gabriel Nadaf, a prominent leader of Israeli Christians, pleads for support from the global community in the war against Hamas terror. “The world has to wake up!” 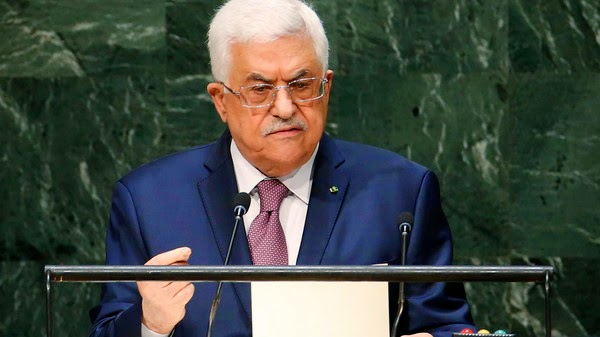 Most of the coverage of Mahmoud Abbas’ speech at the UN has centered aroundÂ his perverse descriptionÂ of the Gaza war as “genocide.”

But some of his other remarks are perhaps more notable.Â From theÂ official transcript: dogs vomit!

Many Europeans who would laugh at the idea of negotiating with ISIS or al-Qaeda say that Israel should negotiate with Hamas.
Almost nobody sees that the invention of the “Palestinian people” has transformed millions of Arabs into a genocidal weapon to be used against the Israelis, and even, as in Europe recently, the Jews. Transforming people into a genocidal weapon is a barbaric act.
Israel was urged to find ways to coexist peacefully with people who did not want to co-exist with it.Â Terrorism against Israel fast became acceptable: a “good” terrorism.
Hamas’s stated aim is the destruction of Israel. Its stated way to achieve this aim is terror attacks, called “armed struggle” by Hamas leaders. To this day the Palestinian Authority has not ceased praising and promoting terrorism.
If hatred of Israel is increasing in the U.S., it is largely confined to academics and other extreme radical circles, many of which are funding or receiving funding from Soviet-style agitprop organizations.Â Journalists are recruited to disseminate descriptions of “facts” as if they were real facts. Pseudo-historians rewrote the history of the Middle East. The falsified version of history replaced history.