The Islamic State of Iraq and Syria (ISIS) has shocked the world with its beheadings and mass killings and now an alleged member has declared that the group relishes “drinking blood.”

Self-claimed ISIS militant Rabie Shehada, known as “the Palestinian slayer,” made the chilling statement in a video recently posted online.

“We love dying for Allah as much as you love life,” he also said in the brief footage. (Al Arabiya News)

These are the same a$$holes that accuse the Jews of what THEY are doing:

Another day, another Arab blood libelÂ

Following are excerpts from an interview with former Jordanian MP Sheik Abd Al-Mun’im Abu Zant, which aired on Al-Aqsa TV on September 7, 2014:

Abd Al-Muni’m Abu Zant: We have to understand the true nature of the Jews, because the entire world is deceived and tormented by them. The Holy Koran has revealed their true nature, as expressed by our masters, the prophets.

One could go on forever about the deceptiveness of the Jews. They are liars. They allow cannibalism, and the eating of human flesh. Check their Talmud and religious sources. On their religious holidays, if they cannot find a Muslim to slaughter, and use drops of his blood to knead the matzos they eat, they slaughter a Christian in order to take drops of his blood, and mix it into the matzos that they eat on that holiday.I have yet to see an Arabic-language news article thatÂ deniesÂ the classic blood libel. 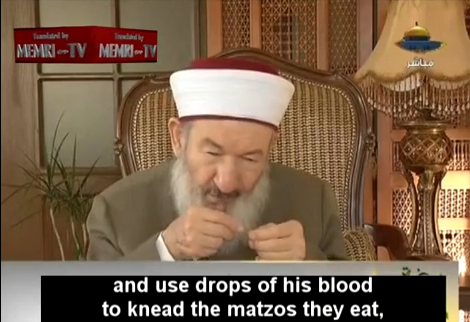