Hurting innocent yogurts to buy shoes for his wifey:

“Sharia Law – whatever that is…” Mohamed El Mouelhy, halal racketeer

A brilliant piece by Bernard Gaynor:

“These are the stupid things that people are saying,” says Mohamed El Mouelhy, the founder of the Halal Certification Authority.

For those who don’t know, the Halal Certification Authority claims to have 80 per cent of the halal certification market share in Australia.

And as Mohamed El Mouelhy has stated previously, this makes him very rich indeed. Just check out the two minute mark of this Today Tonightreport.

Anyway, about three seconds before Mr El Mouelhy went off on SBS about the stupid things that he claims people are saying, he himself said something that is rather strange for a halal certifier. That’s because Mohamed El Mouelhy seemed say that he does not know what Sharia Law is.

This is what he said:

“Well they have said that I’m dishonest, or that I’m using the money that I’m taking to support terrorists, or that I’m actually working to install Sharia Law – whatever that is – in Australia, and to Islamise Australia. These are the stupid things that people are saying.”

Mohamed El Mouelhy said these things while talking to SBS about his defamation case against the Q Society and Kirralie Smith, who runs the Halal Choices website.

You may  be interested to know that he also complained to SBS that people had called him names. He didn’t specify in any detail exactly who had called him what. Instead, he just said that anyone would sue everyone else if name calling was going on. He also added that the Q Society and Kirralie Smith had no right to express their views. And then, for good measure, he managed to call the members of the Q Society and Kirralie Smith bigots. And racists. And even racist bigots.

But regardless of who has said what, I must admit that I’m struggling to understand a few things.

If someone makes a pretty penny by having Australian companies ensure that the food they sell is produced in accordance with Sharia Law, aren’t they working to install Sharia Law in Australia? Isn’t their job all about Islamising things that weren’t Islamised before? And if those things are already done in accordance with Islamic ways, then why is there a need for big ‘Halal Certified’ tick of approval?

But then again, maybe I’m looking at this through the self-righteous and privileged eyes of an imperialist, cis-gendered, white Anglo-male. If only people like me weren’t racist bigots. Then we’d understand that you can have an increasing number of supermarket aisles all certified halal without anyone imposing anything Islamic on the Australian people.

Of course, another explanation for this conundrum is that it’s entirely possible Mr El Mouelhy actually has no idea whatsoever about Sharia Law. And if that is the case, then he probably does have a pretty good point to make: how can he be working to implement Sharia Law when he hasn’t got the foggiest idea about rituals of Islamic animal slaughter and the big divine no no to bacon?

But I hope for his sake that this is not the case. I can’t imagine that it can be too good for a halal certifier’s credibility to admit publicly that they don’t know what Sharia Law is. After all, halal food is simply food that is compliant with Sharia Law. So he might find himself in a bit of hot water for making himself rich by ‘certifying’ that food is Sharia Law compliant if he has no idea what Sharia Law is.

Additionally, his statement is not going to help ‘win over’ Australians who are convinced that halal certification is just one big scam. And it pretty much would be one giant scam if the largest halal certification organisation in Australia was founded by a guy who does not know what Sharia Law is.

On the bright side, if the halal certifiers themselves don’t know one end of a pig from another when it comes to Sharia Law, then we can probably get rid of this whole certification hullabaloo altogether.

After all, it would appear from Mr El Mouelhy’s statement that the squiggly lines are as meaningless to him as they are to everyone else. So let’s banish them. It would save us from the cost of paying Mr El Mouelhy for providing pointless services and it would remove the heartache of wondering why we are being forced to buy meat sacrificed in accordance with an Islamic ritual.

I don’t know if I speak for everyone, but I’m certainly over the whole throat being cut thing while someone goes on about Allah in the background.

Enough already. Let’s move on to something else. Like Halal Choices.

If you want to know whether you are buying something that has been certified as compliant with Islamic Law for a fee by a person like Mohamed El Mouelhy, then Halal Choices has a phone app just for you.

You can find it here.

And if you think it is worthwhile having people like Kirralie speak up about issues that concern Australians, or that organisations like the Q Society play an important part in democratic debate and discussion, then you can help their cause by donating to their legal defence here.

I certainly think both Kirralie Smith and the Q Society do a great job and I am pleased to raise their plight on this webpage.

I also know that readers of this website have been very generous. Unfortunately, we are in a war for our society’s soul. This war is not being fought on the battlefield. It is being fought in the media, the classroom and in the courts.

And the bullets are dollars. I’m certainly going to be funding a few in this battle. 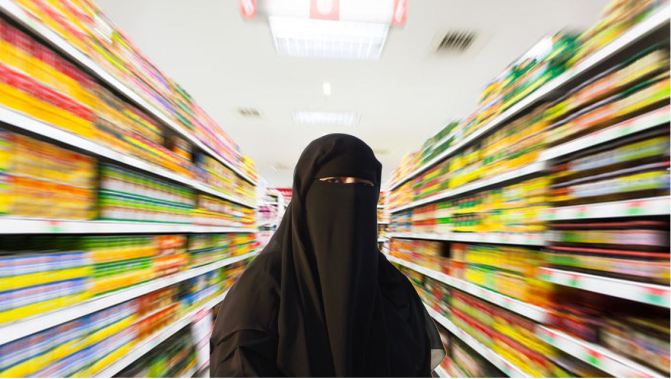 As you may know, serial litigant and Anti-Free Speech activist Gary Burns is using legal terrorism to shut down this website. He’s lodged a huge volume of complaints with the New South Wales Anti-Discrimination Board. In each case, I could be fined up to $100,000 and forced to apologise for my beliefs. If I don’t, I could be jailed for contempt.

You can read more about the abusive behaviour of Gary Burns and this entire saga here.

I intend to fight. But it will be expensive to win and a loss will impact every one of us. There will be a new target if this page is forced to shut down.

I would appreciate any financial assistance that you may be able to provide. Details and the progress to date are shown below: