The European Union has been so obsessed with the Israeli issue over the years that it has ignored its own demographic collapse. — by Guy Bechor

Between half a million to a million Muslim jihadists and infiltrators will flood the shores of Italy and the European Union, the official in charge of the EU’s borders has estimated.

The “European Union,” which continues to destroy Europe’s nation states step by step, has absolutely no ability to prepare for this influx, and for the millions which will arrive in the coming years.

He says there is a need to prepare, but it’s clear that the “European Union,” which continues to destroy Europe’s nation states step by step, has absolutely no ability to prepare for this influx, and for the millions which will arrive in the coming years.

Op-ed: Until Europe resolves its own identity crisis, it cannot successfully integrate its immigrants. — Full op-ed

The EU thought it was a fortress which is immune to the troubles of the world, and is now realizing, anxiously, that this fortress has been completely breached. The moment an infiltrator penetrates the fortress through the sea, he is free to continue to any country in the EU according to the Schengen Agreement.

The Islamic State controls part of eastern Libya, mainly the city of Sirte, and at least two seaports. In other words, the Islamist organizations’ dream of obtaining an exit in the Mediterranean Sea has already been fulfilled, and ISIS or other organizations will punish Europe by flooding it with millions of refugees. What Hamas failed to obtain in Gaza, an independent seaport in the Mediterranean Sea, ISIS has succeeded to obtain in Libya. 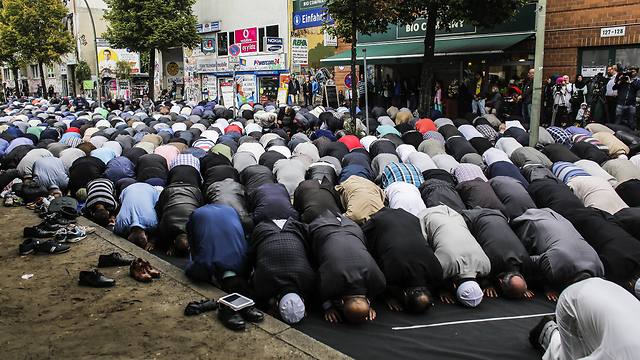 Italy is already finding it difficult to withstand the huge influx of this immigration of nations, but the European Union is imposing endless rescue operations of infiltrators in the middle of the sea, like Mare Nostrum or Triton.

As the civil war continues to rage in other parts of Libya, the influx will increase in any event. The major immigration season has begun with the arrival of spring (a slightly tragic word when it comes to the Middle East). Disguised terrorists will arrive along with the millions, weapons are already being smuggled through the sea to European countries, and the level of internal tensions will only increase as a result.

It was Europe which helped bring down Muammar Gaddafi four years ago in order to introduce its values to Libya. Now Libya will introduce its values to Europe, and it will likely not end in Libya. The chaos is expected to reach Algeria, Tunisia and western Egypt as well. It’s only a matter of time. Now that Boko Haram has become part of the Islamic State, in the near future we’ll also see black Africa merging with North Africa, on the verge of Europe.

The European Union thought it was far from the Middle East, and that it could therefore navigate it while being protected. Now, the Middle East is starting to navigate Europe. This stems from a complete misunderstanding of reality among the leaders of the “European Union.”

Over the years, they kept on meddling in the Israeli issue, out of the groundless assumption that it is the heart of the Middle Eastern conflict, and that if it would be “solved,” it would lead to stability in all the rest. They were obsessed and are still obsessed with the Israeli issue, neglecting all the other arenas: Syria, Iraq, Lebanon, Yemen, Lebanon and others.

We are the EU’s heart’s desire, a self deception of an imaginary reality. But the Muslim Middle East is now a pan-European problem, which has to do with more than 20 million unsatisfied Muslims who are already living in the European Union and have no intention of leaving. On the contrary, they will double their numbers within several years. It’s funny that the same EU has been speaking for years about Israel’s demographic problem, which no longer exists, while ignoring its own demographic collapse.

The European Union is continuing to roll its eyes heavenward and pretend that everything’s okay. This pretending, and the ongoing suspicious meddling in Israel, will bring a disaster upon this entire continent, and may it already be too late.