The latest euphemism for black African and Arab invaders is “Mediterranean”. It is adding insult to injury that they are no longer called ‘refugees’ or ‘asylum seekers’, but just ‘migrants’.  For Mohammedans, al hijra, or migration, is an obligation. It is what Muhammad did when he left Mecca and fled to Medina to build his first mosque. A few years later, he murdered  all the friendly Jews who helped him settle there.

Mediterranean migrants threaten to throw themselves into the sea

Muslims pray in a street in Paris in 2011 due to to a lack of capacity in the city’s mosques. Photo: AFP

The French government opened talks with ‘loyal’ Muslim leaders on Monday with one of the main topics up for discussion being the shortage of mosques in France. One Muslim leader says the answer lies with France’s empty churches.

The question of the role of Islam in France is up for discussion on Monday as the French Prime Minister Manuel Valls and members of his government held a conference with around 150 Muslim leaders.

Here’s another gem from that article:

Another sensitive subject on the agenda is the question of security around Muslim places of worship.

The number of Islamophobic attacks has soared in France since the terror attacks with Muslim groups recording a six-fold increase since January.

(Thanks to the Tundra Tabloids)

“It’s the same God, these are neighboring rites, fraternal, and I think that Muslims and Christians can coexist and live together,”--Dalil Boubakeur

France’s top Muslim official has suggested turning empty or abandoned Catholic churches into mosques, saying as many as 5,000 are needed for the country’s Muslim population – the largest in Europe.

“It’s a delicate issue, but why not?” Dalil Boubakeur, rector of the Grand Mosque in Paris and the president of the French Council of Muslim Faith, told Europe 1 radio on Monday.

There are currently about 2,500 mosques in France with another 300 under construction, but the number falls short of what is needed, he said. With roughly 5 million Muslims in France, at least 5,000 mosques are needed, Boubakeur said.

During the interview with French radio he gave an example of the transition of a church into a mosque in Clermont-Ferrand, which was welcomed by the local religious community. The church had been abandoned for more than 30 years and the building was given to the Muslim community in 2012.

“It’s the same God, these are neighboring rites, fraternal, and I think that Muslims and Christians can coexist and live together,” he said.

His remarks were welcomed by the Christian community as a “legitimate” demand.

“Muslims should, like Christians and Jews, be able to practice their religion,” Monseigneur Ribadeau-Dumas, spokesperson for the Bishops’ Conference of France, told French radio station Europe 1.

However, this suggestion has been criticized by the far-right National Front party. In April, Florian Philippot, its vice-president, argued France doesn’t need more, because “100 percent of places of radicalization are mosques.” 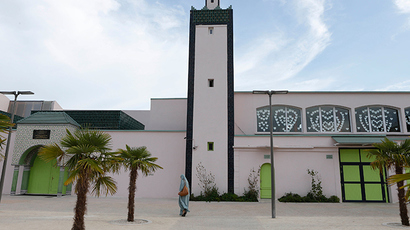 The party’s leader Marine Le Pen called to stop the construction of new mosques in March.

“We must today freeze the construction of new mosques while we verify the origin of their financing,” she said in an interview to France 24.

The question of building closer ties with the Muslim community was discussed at the talks between the French government and about 150 Muslim leaders in Paris on Monday.

French Prime Minister Manuel Valls stressed there was no link between extremism and Islam.

“We must say all of this is not Islam,” he said. “The hate speech, anti-Semitism that hides behind anti-Zionism and hate for Israel… the self-proclaimed imams in our neighborhoods and our prisons who are promoting violence and terrorism…

“Islam still provokes misunderstandings, prejudices, and is rejected by some citizens,” he added. “Yet Islam is here to stay in France. It’s the second largest religious group in our country.”

The first conference between the government and Muslim community leaders comes five months after the Charlie Hebdo and kosher store jihadist attacks in Paris that killed 17 people.

The terrorists responsible for the attacks “belong to a different world than we do,” said Boubakeur, speaking at the conference.

There has been a huge increase in anti-Muslim incidents in France following the Islamist attacks in Paris. A report issued in January by the National Observatory Against Islamophobia said that over the month there has been an 110-percent increase in attacks.

Here, from an informed reader:

Is the future of France the same as the past of Iran?

Either a few Moslems settled on the outskirts of a Zoroastrian village, or one or two Zoroastrian families adopted Islam. Once the dominant faith had made a breach, it pressed in remorselessly, like a rising tide. More Muslims came, and soon a small mosque was built, which attracted yet others. As long as Zoroastrians remained in the majority, their lives were tolerable; but once the Moslems became the more numerous, a petty but pervasive harassment was apt to develop.

This was partly verbal, with taunts about fire-worship, and comments on how few Zoroastrians there were in the world, and how many Moslems, who must therefore posses the truth; and also on how many material advantages lay with Islam. (As we hear time and time again today that “Islam is the World’s fastest growing religion”). The harassment of the Zoroastrians. was often also physical; boys fought, and gangs of youth waylaid and bullied individual Zoroastrians”

Source: History of Jihad against the Zoroastrians of Iran (634-651)