A car bomb claimed by the Islamic State of Iraq and the Levant (ISIL) group has exploded in a busy market in an Iraqi town, killing at least 115 adults and children celebrating the end of the Muslim fasting month of Ramadan, police have said.

About 170 people were also wounded by the blast in Khan Bani Saad, a predominantly Shia town approximately 30km northeast of the capital Baghdad. PARIS: Muslims celebrate Bastille Day by torching more than 130 cars in one night Bastille Day in Paris is always celebrated with great fireworks displays. Conversely, for many young Muslims in the vast immigrant population there, the idea of fireworks means setting other people’s cars on fire in the streets. Fortunately, not as many fires as every New Years Eve when there usually are more than 1,000 car burnings overnight. Le Figaro via GalliaWatch In the Parisian region alone nearly 130 cars burned. A sad record for this eve of July 14 that has become, along with New Year’s Eve, a traditional rendezvous for Muslim thugs and police. These figures are especially disturbing because they are considerably higher than the national daily average: about 80 cars are burnt every day in France, half of them in the Parisian region.

About one hundred persons were held in custody in Paris. In the 16th arrondissement twenty-five cars were set on fire near the porte de Saint-Cloud when a motor-bike caught fire and gas poured onto the street. In the 18th arrondissement, on the rue Marcadet, another car was torched while confrontations broke out on the rue Queneau and rue de la Chapelle. Even the 3rd arrondissement was not spared confrontations, and one policeman was wounded while chasing a group of “young people” ages 16 – 25 who were throwing stones at the security forces.  (Barenaked Islam)

A Mohammedan show of strength in Birminghamistan

70,000 Muslims gather in Birmingham for celebration to mark Eid

Up to 70,000 Muslims attended morning prayers at Small Heath Park in Birmingham today to celebrate Eid, which marks the end of Ramadan, the holy… (“holy?” Holy for whom? For you?)

IN PICTURES: Anti-Islam and anti-racism protesters clash at Melbourne rally

Wild scenes have been captured at the scene of two opposing demonstrations in Melbourne today. Click through to see the images from the rally.–9NEWS.COM.AU

Rome (AFP) – Residents in a chic Rome suburb and a northern Italian village staged angry anti-immigrant protests on Friday, with villagers setting mattresses ablaze in a bid to stop authorities from housing migrants.

Authorities in the village of Quito plan to accommodate 101 immigrants in empty apartments, but several residents broke into one of the buildings, removed camp beds, mattresses and televisions intended for the newcomers and set them on fire outside.

The protesters then put up tents, with the Corriere della Sera newspaper quoting them as saying: “We aren’t going home until they leave — this is an invasion.”

Italy is currently hosting more than 80,000 migrants who have crossed the Mediterranean fleeing war, persecution or poverty in the Middle East and Africa. The arrivals include many Africans, particularly Eritreans, as well as Syrians.

Luca Zaia, the president of Italy’s northern Veneto region and a member of the anti-immigrant Northern League party, told Italian television he agreed with the protesters, and complained about the “Africanisation” of his own region.

“This is a declaration of war for those who don’t understand what it means to put (migrants) alongside families with young children,” he said. 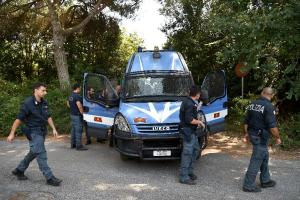 Police on guard at Casale San Nicola, north of Rome, as hundreds of local residents supported by mem …

But Treviso prefect Maria Augusta Marrosu said: “They are staying, because they don’t have the choice.”

Graffiti sprayed on the side of a building in Quinto said in large red letters: “Prefect Marrosu, take them home.”

A near-simultaneous protest in Casale San Nicola, a well-heeled suburb north of Rome, saw police face off against a a hundred locals protesting the arrival of some 20 migrants.

The protesters, who included members of a extreme-right group, shouted “You can’t bring them here” and “We are afraid for our daughters” as several women formed a human chain to try block the migrants’ bus.

Clashes erupted between the demonstrators and police, who escorted the migrants into a former school that has been turned into a reception centre. Two demonstrators were arrested over the incident, in which 14 officers were slightly injured, the police said.

Everyone, from President Obama, to Governor Haslam to Mayor Berke are all promising to “take steps” to prevent this from happening again. After 9-11, the first step President Bush should have taken was to shut off Muslim immigration. That one step could have saved the entire Homeland security budget. We never needed to create another giant bureaucracy, we needed to stop Muslims from coming here, and let the FBI monitor those already here and their mosques. That would have sufficed. Instead, we’ve been bringing in another 100,000 Muslims per year – that’s another million and a half Muslims purposely brought into our country for the FBI and Homeland security to deal with.

You may remember US attorney Bill Killian, who is now dealing with the aftermath of this latest terror attack, had proposed criminalizing internet posts “offensive” to Muslims. As I said in protest in Manchester TN, at the time in protest to his proposal, “Stop all Muslim immigration and end all mosque building, Now!” Otherwise, our children and grandchildren will know terror without end.

Let’s have a moritorium on all immigration, including refugees. Let that become a plank for the Republican party in the next Presidential election.

Institute a moritorium on all immigration and build a barrer on our southern border. Somehow, I think that’s a job Americans WILL do.

A car bomb claimed by the Islamic State of Iraq and the Levant (ISIL) group has exploded in a busy market in an Iraqi town, killing at least 115 adults and children celebrating the end of the Muslim fasting month of Ramadan, police have said.

About 170 people were also wounded by the blast in Khan Bani Saad, a predominantly Shia town approximately 30km northeast of the capital Baghdad.

ISIL claimed responsibility for the attack on Twitter and said the car was carrying around three tonnes of explosives.

Angry crowds went on the rampage after the explosion, smashing the windows of cars parked in the street in grief and anger.

“Some people were using vegetables boxes to collect body parts of kids’ bodies,” police major Ahmed al-Tamimi told the Reuters news agency from the site of the explosion, describing the damage to the market as “devastating”.

Iraq’s speaker of parliament said the attack had struck an “ugly sectarian chord”.

The Diyala provincial government declared three days’ mourning and ordered all parks and entertainment places to close for the rest of the Eid al-Fitr holiday to pre-empt any further attacks.

Al Jazeera’s Imran Khan, reporting from Baghdad, said the scale of the attack and the number of people killed had shocked many Iraqis.

“ISIL is under an enormous amount of pressure in Anbar province where the coalition has been using air strikes against them,” our correspondent said.

“The authorities say what they are doing, as al-Qaeda did before them during its peak around 2006, 2007 and 2008, is attack another area when they come under pressure. They are saying, ‘We still have the capacity to attack you’.

“This is a very tough fight for the Iraqis and they were expecting one but the size of this attack will concern many.”