Al Reuters hastens to report the grievances and makes it sound as if innocent Muslims were wrongly blamed:

…. exiles and rights groups say China has never presented convincing evidence of the existence of a cohesive militant group fighting the government, and that much of the unrest can be traced back to frustration at controls over the culture and religion of the Uighur people who live in Xinjiang.

Radio Free Asia said the number of people killed in the 18 September attack at the Sogan colliery in Aksu had reached 50, with most casualties members of the Han Chinese majority. Police blamed knife-wielding separatists. 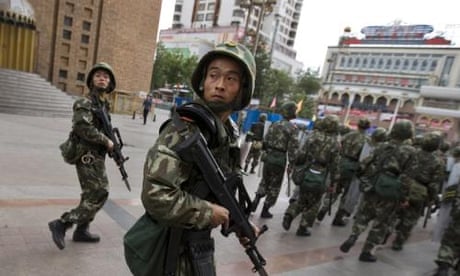 When police officers arrived on the scene, attackers “rammed their vehicles using trucks loaded down with coal”, the report said, citing its own sources.

“Nearly all the workers who were not on shift at the time were killed or injured,” police officer Ekber Hashim told the station. “Some workers were sleeping while others were preparing to work when the attackers raided the building after killing the security guards.”

Radio Free Asia is a little bit better in its reporting:

The death toll in a knife attack orchestrated by alleged “separatists” at a coal mine in northwestern China’s troubled Xinjiang Uyghur Autonomous Region has climbed to at least 50 people—including five police officers—with as many as 50 injured, according to local security officials who say nine suspects are on the run.

The attack occurred on Sept. 18, when a group of knife-wielding suspects set upon security guards at the gate of the Sogan Colliery in Aksu (in Chinese, Akesu) prefecture’s Bay (Baicheng) county, before targeting the mine owner’s residence and a dormitory for workers.