Duncan Lewis has gone into bat for Islam.

This is what he said last week:

“I don’t buy the notion that the issue of Islamic extremism is in some way fostered or sponsored or supported by the Muslim religion. I don’t buy that at all. I think it’s blasphemous to the extent that I can comment on someone else’s religion.’’

The Australian newspaper is reporting that ASIO’s Director-General called Coalition MPs to urge them to use the so-called “soothing” language favoured by Prime Minister Malcolm Turnbull when discussing Islam.

It seems Duncan Lewis is more concerned about ‘blaspheming’ Islam than he is about protecting Australians!

“If I was the Attorney General, Duncan Lewis would be packing his desk today” writes Bernard Gaynor – ALA Senate Candidate for Queensland.

The ‘Dunce’ is not fit to head ASIO.

Duncan Lewis has an unshakeable faith in Islam, even though can’t quote from the Koran. That, and his political interference, means he is not fit to head ASIO.–– Bernard Gaynor
You can read Bernies article on his website or below the fold.

The Director General of ASIO, Duncan Lewis, has the responsibility of protecting Australia from internal security threats to our Western democratic way of life.

And he thinks Islam is peaceful. In fact, he thinks it is so peaceful that he’s taken it upon himself get on the blower to a number of politicians and effectively order them to stop speaking about the peaceful nature of Islam, lest we face another terrorist attack.

As such, if I was the Attorney General, Duncan Lewis would be packing his desk today.

He didn’t have the courage to repeal anti-free speech laws in this country and caved in on scrapping section 18C of the Racial Discrimination Act to please the Islamic community.

And George Brandis has now clearly allowed Duncan Lewis to subvert democratic conventions, once again in order to please the Islamic community.

So the Attorney General can add another white feather to his cap of cowardice.

We know this because it was tweeted from an official Royal Australian Navy Twitter account and it remains there today, even after it has been brought to the attention of the Chief of Defence Force. 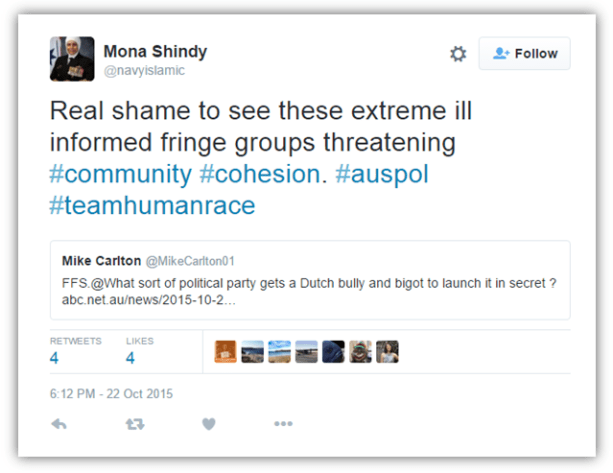 I guess you could say that this means the military has declared a political war on a registered political party in Australia. That’s not really a comforting thought for the future of democracy in this country, but it can hardly be surprising when the entire intelligence and security apparatus has gone into bat for a totalitarian theocratic ideology.

And make no mistake, Duncan Lewis has gone into bat for Islam.

This is what he said last week:

“I don’t buy the notion that the issue of Islamic extremism is in some way fostered or sponsored or supported by the Muslim religion. I don’t buy that at all. I think it’s blasphemous to the extent that I can comment on someone else’s religion.’’

Let’s get to the crux of the problem: Duncan Lewis is more concerned about ‘blaspheming’ Islam than he is about protecting Australians.

As a result, he’s not prepared to even analyse Islamic ideology. He just wants us all to respect it, even though he has no idea what it consists of. As he says, it’s not his religion.

There’s really only one way to deal with people like this.

You can’t educate them: they are too intellectual for that.

You can’t reason with them: they are too proud for that.

And you can’t communicate with them: they’ve already decided that you are part of the problem.

Basically, the only thing left that you can do is humiliate them.

And Duncan Lewis’ views should be ridiculed. They are lazy and devoid of all logic. They are so vacuous that they can hardly be parodied. They are so ridiculous, that ridiculous Hollywood films now appear almost as if they documenting today’s lunacy.

The atrocities that are now being carried out on a daily basis across the Western world are clear proof that Duncan Lewis and his cohort of mindless pro-Islamic zombies are completely out of touch with reality.

But if one attack won’t wake them from their slumber, a million more won’t either.

So there’s no point asking them to consider this evidence. They’ve rejected it already. Instead, people like Duncan Lewis have an unshakeable faith in Islam, even though they cannot quote from the Koran.

And this shows the complete hypocrisy of the ‘they come in peace’ intellectual elite. If it was remotely true that Islam was peaceful, where is the scriptural analysis for this?

Why can’t Duncan Lewis give us any Koranic-based analysis to back up his belief that Islam is peaceful?

The answer is simple. He can’t.

He can’t do this for two reasons. Ordinary people already know what the primary reason is: Islam is not peaceful. Even if Duncan Lewis tried, he could not produce any argument, based on Islamic scripture, to reject jihad against the West.

The best he could do is present the case for when jihad is permissible and, in Islamic law, that power is one that lawyers would describe as ‘very broad’. And for every half-hearted, out of context quote he could muster to pretend that Islam is peaceful, he’d be trumped with a coherent Islamic justification for violence and a ‘moderate’ Grand Mufti who likes to visit clerics with a penchant for the odd sermon extolling the virtue of suicide attacks.

This should be of more concern for Australians. It shows the laziness of the analysis, assessment and advice that is being provided to our government. It highlights the emptiness of the rhetoric from the politically correct leadership we have today. And it demonstrates conclusively that while Islam is a threat to Australia, our nation has already been weakened from within.

Duncan Lewis represents all that is wrong with Australia’s response to Islam. He might like to think that Islam comes in peace, but he should not be so contemptuous of the resolve of the Australian Liberty Alliance. We are coming too. And while it might take a few elections before we can win government, people like Duncan Lewis should know that they will be removed when we do.

“Former prime minister Tony Abbott used an opinion piece last week to call for a ‘religious reformation’ within in [sic] Islam. Mr Abbott called for a ‘hearts and minds campaign against the versions of Islam that make excuses for terrorists, saying Islam had not undergone an equivalent version of the Reformation and Enlightenment in Christian nations.” In response, “Prime Minister Malcolm Turnbull responded to Mr Abbott’s remarks by cautioning against blaming all Muslims for Islamic State terrorist attacks. ‘I’m not about to run a commentary on Mr Abbott but I’d simply make the observation again that the one thing we need to be very careful not to do – and I’m sure Tony agrees with this by the way – is to play into the hands of our enemies and seek to tag all Muslims with the crimes of a few.’”

Can no one in power think clearly anymore? Is everyone thoroughly brainwashed by Islamic supremacist propaganda? Calling for a reformation in Islam is not blaming all Muslims for the crimes of a few. Islamic doctrine is one thing, and the people who hold it are quite another.

Even worse, however, is Australian Security Intelligence Organisation chief Duncan Lewis’ call for voluntary surrender of the freedom of speech so as not to offend Muslims and to guard against the non-existent but always-feared “backlash.” Which will be first to adopt Sharia blasphemy laws in full? Australia, the United Kingdom, Canada or the United States? It will be a close race.

4 thoughts on ““Soothing language” needed when talking about Islamic savages”