Commies in France really made the most of May Day yesterday (or as it is known to countermoonbats, Victims of Communism Day). This ought to help Marine Le Pen in Sunday’s election almost as much as the latest example of Islamic outreach:

French police were pelted with Molotov cocktails and fireworks as hundreds of anti-Marine Le Pen activists hijacked the annual May Day march on Monday.

Officers were pictured on fire while demonstrators were hit with tear gas and charged with batons as scenes turned ugly ahead of a speech by Le Pen and her presidential opponent Emmanuel Macron.

As with Islamic savages, so with leftists; coming to mutually acceptable terms with them is not possible. Either they win or we do.

In case you missed it: Macron is threatening to walk out of the debate if marine is mean to him. Is this the leader France needs? Marie-France Garaud: “We no longer have a State” 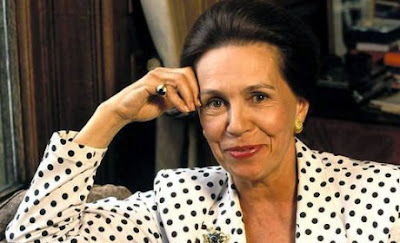 Marie-France Garaud was at one time considered the most powerful woman in French politics (by Newsweek magazine). Born in 1934, she studied law and entered politics in 1961 when she became parliamentary attaché in the ministry of Cooperation. Later in 1969 she was named technical adviser to president Georges Pompidou, continuing in that capacity until his death in 1974. She continued to advise Jacques Chirac but walked out having come to conclusion he was not capable of governing. She opposed the Maastricht and Lisbon Treaties that would be instrumental in the creation of the European Union. She has come out for Marine Le Pen. An interview with Le Figaro has been reprinted at numerous websites. It is worth reading:

– Le Figaro: What is at stake in this election?

– Marie-France Garaud: French sovereignty. In other words, our freedom.

– How do you judge the platforms of the two candidates?

– I have the feeling that Monsieur Emmanuel Macron has neither self-respect nor lucidity. He exposes his weaknesses with an extraordinary masochism. There’s a beaten dog look about him. He does not respect France and he is even destroying the support of his political existence.

– But doesn’t he offer a plan?

– He has no economic plan. He cannot have one because we are no longer anything but a territory inside the European Union. We have to get out of there as rapidly as possible, whatever the cost, because freedom is better than slavery.

– Is it really possible to leave the EU?

– Yes, completely. All we have to do is decide what we want. At the end of the war, two men had understood that: De Gaulle and Churchill, who never alienated his country’s powers. We are witnessing an attempted domestication of the European countries, we are facing a possible Fourth Reich.

– How should France address Germany?

– France has nothing to say to Germany. She must leave the EU and then they can speak as one equal to another.

– How do you regard this 2017 presidential election?

– We no longer have a State. The five-year term that is ending was non-existent and I note an extraordinary historic failing in our leaders. Today, the economy and finance are replacing sovereignty. That is impossible.

– That proves she has read what I wrote. I have never met Marine Le Pen. Thursday, we spoke on the phone. Today she is the only candidate who is not bound hand and foot to the Germans. Obviously, she is the only one that has the temperament to reestablish French sovereignty. She has, I believe, the sense of State to the point of preserving our nation.

– What is the nature of the extreme right today? I see none. And what does the Front National represent without Marine Le Pen? The political parties have a minor importance and influence. The French know how to be more rebellious than that.

– In the street there is an air of hostility against Marine Le Pen but also against Emmanuel Macron. Do you understand the fears of the French?

– How would you answer the partisans of Emmanuel Macron if they reproach you for having an obsolete point of view?

– But who is Emmanuel Macron?

– Do you intend to appear side by side with Marine Le Pen between now and the end of the campaign?

– No. I am a free person. I knew France when she was governed. And I express myself freely.

Note: Numerous readers of Le Figaro express contempt for her because of her age. One asks: Why print an interview with an old lady? Others however welcome her observations.

It’s true that Marie-France Garaud was more important behind the scenes than in the front line. She ran for president in 1981 but garnered very few votes. However her struggle against the formation of the EU is as important today as it was then. In a manner of speaking, the torch has been passed to Marine Le Pen.

Below, a photo circa 1979 showing Jacques Chirac (center) with his two advisers Pierre Juillet and Marie-France Garaud. Chirac dismissed the two, having made his pact with the devil. He followed François Mitterrand and the proponents of the European Union. Marie-France Garaud is supposed to have said of Chirac: “I thought he was made of the marble used to make statues, but he was made of the porcelain used to make bidets.” 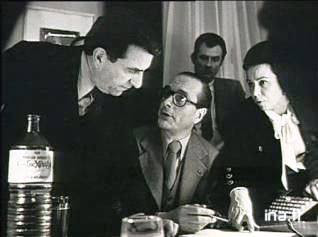 If you read French you may be interested in a related article at Résistance Républicaine that provides background information on the political factions that opposed and supported the European Union.