A few days ago, some of Europe’s most important intellectuals — including British philosopher Roger Scruton, former Polish Education Minister Ryszard Legutko, German scholar Robert Spaemann and Professor Rémi Brague from the Sorbonne in France — issued “The Paris Statement“. In their ambitious statement, they rejected the “false Christendom of universal human rights” and the “utopian, pseudo-religious crusade for a borderless world”. Instead, they called for a Europe based on “Christian roots”, drawing inspiration from the “Classical tradition” and rejecting multiculturalism:

“The patrons of the false Europe are bewitched by superstitions of inevitable progress. They believe that History is on their side, and this faith makes them haughty and disdainful, unable to acknowledge the defects in the post-national, post-cultural world they are constructing. Moreover, they are ignorant of the true sources of the humane decencies they themselves hold dear — as do we. They ignore, even repudiate the Christian roots of Europe. At the same time they take great care not to offend Muslims, who they imagine will cheerfully adopt their secular, multicultural outlook”.

In 2007, reflecting on the cultural crisis of the continent, Pope Benedict said that Europe is now “doubting its very identity“. In 2017, Europe took a further step: creating a post-Christian pro-Islam identity. Europe’s official buildings and exhibitions have indeed been erasing Christianity and welcoming Islam.

One kind of official museum recently opened by the European Parliament, the “House of the European History“, costing 56 million euros. The idea was to create a historical narrative of the postwar period around the pro-EU message of unification. The building is a beautiful example of Art Deco in Brussels. As the Dutch scholar Arnold Huijgen wrote, however, the house is culturally “empty”:

“The French Revolution seems to be the birthplace of Europe; there is little room for anything that may have preceded it. The Napoleonic Code and the philosophy of Karl Marx receive a prominent place, while slavery and colonialism are highlighted as the darker sides of European culture (…) But the most remarkable thing about the House is that.as far as its account is concerned, it is as if religion does not exist. In fact, it never existed and never impacted the history of the continent (…) No longer is European secularism fighting the Christian religion; it simply ignores every religious aspect in life altogether”.

The Brussels bureaucracy even deleted the Catholic roots of its official flag, the twelve stars symbolizing the ideal of unity, solidarity and harmony among the peoples of Europe. It was drawn by the French Catholic designer Arséne Heitz, who apparently took his inspiration from the Christian iconography of Virgin Mary. But the European Union’s official explanation of the flag makes no mention of these Christian roots.

The European Monetary and Economic Department of the European Commission then ordered Slovakia to redesign its commemorative coins by eliminating the Christian Saints Cyril and Methonius. There is no mention of Christianity in the 75,000 words of the aborted draft of the European Constitution.

“The submission is moving ahead,” replied Erika Steinbach, the influential former chair of the Federation of Expellees — Germans expelled from various Eastern European countries during and after World War II.

Beatrix von Storch, a leading politician from Alternative for Germany Party (AfD), just tweeted: “NO! NO! NO!”.

De Maizière’s proposal shows that when it comes to Islam, Europe’s official “post-Christian” secularism is simply missing in action.

A few weeks ago, a European Union-funded exhibition, “Islam, It’s also our history!”, was hosted in Brussels. The exhibition tracks the impact of Islam in Europe. An official statement claims:

“The historical evidence displayed by the exhibition – the reality of an old-age Muslim presence in Europe and the complex interplay of two civilisations that fought against each other but also interpenetrated each other – underpins an educational and political endeavour: helping European Muslims and non Muslims alike to better grasp their common cultural roots and cultivate their shared citizenship”.

Isabelle Benoit, a historian who helped design the exhibition, told AP: “We want to make clear to Europeans that Islam is part of European civilisation and that it isn’t a recent import but has roots going back 13 centuries”.

The official European establishment has turned its back on Christianity. The establishment appear unaware of the extent to which the continent and its people still depend on the moral guidance of its humanitarian values, especially at a time when radical Islam has launched a civilization challenge to the West. “It is simply a problem of a packing that tends to fill a ‘void'”, just wrote Ernesto Galli della Loggia in the Italian daily newspaper Il Corriere della Sera.

“It is impossible to ignore that behind the packing are two great theological and political traditions — that of the Russian Orthodoxy and Islam — while behind the ‘void’ there is only the fading of the Christian consciousness of the European West”.

That is why it is hard to understand the “logic” behind the official European animosity toward Christianity and its attraction to a basically totalitarian Islam. Europe could easily be secular without being militantly anti-Christian. It is easier to understand why thousands of Poles just took part in a mass protest along Poland’s borders to voice their opposition to “secularization and Islam’s influence“, which is exactly the same as the official crazy EU credo.

During the Second World War, the Allies avoided bombing Brussels, because it was to be the site of European rebirth. If the European elite continue with this cultural repudiation of their Judeo-Christian-Humanistic culture, the city could be its grave.

“We have a Judeo-Christian religious character, not an Islamic one.” 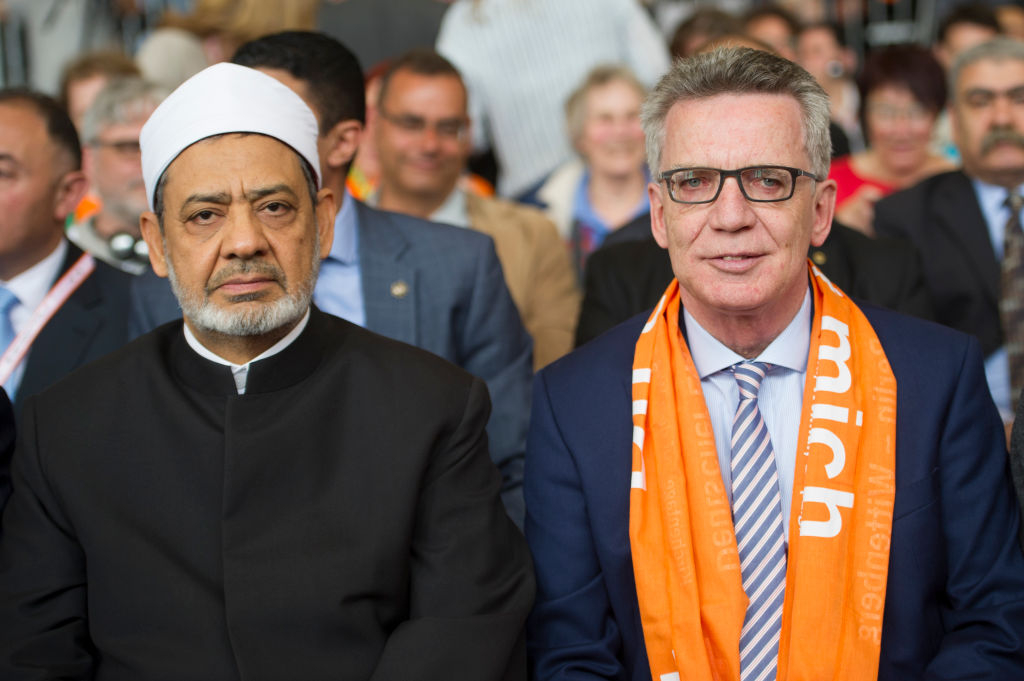 A proposal by German Interior Minister Thomas de Maizière to introduce Muslim public holidays has sparked another furious debate over the role of Islam in Germany. Pictured: De Maizière (right) with Sheikh Ahmad Al-Tayeb, the Grand Imam of Cairo’s s Al Azhar mosque, on May 26, 2017 in Berlin, Germany. (Photo by Steffi Loos/Getty Images)
.

An off-the-cuff proposal by German Interior Minister Thomas de Maizière to introduce Muslim public holidays has sparked another furious debate over the role of Islam in Germany.