There are credible reports of Pakistan trying to foment terror in the region.

For once, a rather objective report on the situation in Burma. Most of the fake news journaille these days is using the same victimhood template for the “oppressed Rohingya”. This article is one of very few that points the finger at the Mohammedan insurgents waging jihad against the Buddhists of Burma.

There is no such thing as “Rohingya”. These people are Bengali Muslim invaders who have been kicked out of Burma. Naturally Bangladesh has to take them back. These are their own people, despite all the hype in the media.

The Bangladesh-Myanmar border areas are teeming with Rohingya refugees now numbering well over half-a-million. Prime Minister Sheikh Hasina has elevated her stature several notches by organising massive humanitarian assistance and supply of relief material to the refugees not because they are Muslims but because it has improved her own image by demonstrating to the world that she is a statesman and not merely a run-of-the-mill politician finishing her political adversaries, trying war criminals and executing them.

Hasina has undoubtedly drawn immense political mileage out of the refugee crises and it is expected to go a long way.

Barely a couple of days ago, I was in Dhaka in connection with a conference and tried to get a first-hand assessment of the security situation vis-à-vis the Rohingyas. The security challenges are enormous needing a close watch on the high number of refugees, who remain vulnerable to the extremist forces. The extremist forces are bent on radicalising a section of them to push them towards IS or Al Qaeda ideology and destabilise the Hasina government. This will eventually abet terror in the fragile region, already reeling under security threats.

Back in Myanmar, we know of a segment of Rohingyas collaborating with a Bangladesh-based terror group Jamaat-ul-Mujahideen Bangladesh (JMB), for training and subsequent infiltration into Bangladesh to unleash violent extremism. Meanwhile, reports indicate the involvement of Lashkar-e-Taiba ( LeT) in training disgruntled Rohingya refugees too.

Both front organisations of Lashkar, Jamaat-ud-Dawa and Fala -I- Insaniyat Foundation, are reportedly active among the Rohingya youth under the cover of providing relief and rehabilitation organisations. Security experts also warn that Myanmar, Bangladesh and India’s eastern states must be closely watched as they seem to be on the verge of experiencing a sudden spurt in Islamic militancy.

There are also credible reports received from a section of the intelligence fraternity that the newly known outfit Arakan Rohingya Salvation Army (ARSA) is active under the leadership of Hafiz Tohar, chief of its military wing. The ARSA nexus with LeT is more or less established. Tohar had earlier set up the Ahkam-ul-Mujahideen (AMM) and was trained in Pakistan after being inducted by one Abdul Qadoos Burmi — chief of the Harkat-ul-Jihad- al-Islami (HuJI-A).

Subsequently, Tohar integrated his outfit into ARSA and is suspected to be behind the attacks on Myanmarese security forces in October 2016, and in August this year. What’s also worrying, as per intelligence reports, is that refugee camps in certain areas are becoming hunting grounds for terror organisations. Recently, new cadres have been recruited from among the Rohingya community in the Rakhine state and in camps in Bangladesh’s Cox’s Bazar.

In the meantime, highly placed sources in the security establishment have indicated that a major ranking officer of the Pakistani Army (possibly from the ISI), has been earmarked to oversee recruitment and training —once again proving Pakistan’s role in fomenting terror preceding radicalisation programmes directed principally against Bangladesh. 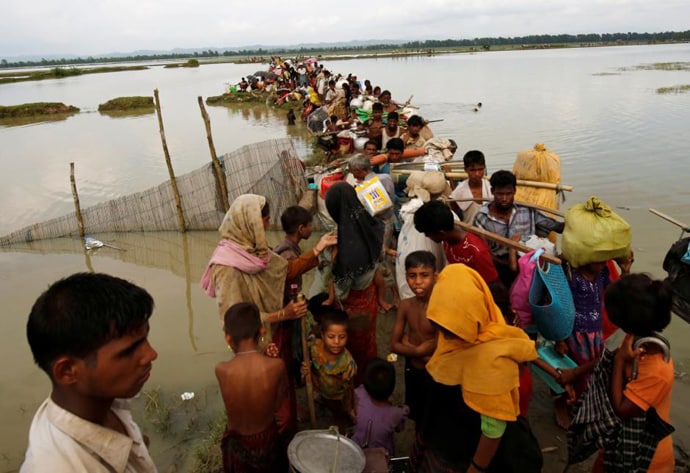 Amid these ongoing developments, external powers have evinced keen interest in the scene in Bangladesh emanating out of the Rohingya crisis.

It was quite surprising to note that Emine Erdoğan, Turkish President Recep Tayyip Erdoğan’s wife, was perhaps the first to visit the refugee camps, aiding the refugees and expressing sympathies with the Bangladesh government. In addition, President Erdogan was seen as the first head of any country to criticise Myanmar for its excesses against Rohingyas, and out of sheer Muslim solidarity, coming to the help of the refugees and Bangladesh, rather expressly and demonstratively.

It must not be forgotten that it’s the same Erdogan who has always been a bitter critic of Hasina condemning her for trying war criminals and executing them. Erdogan’s move thus appears more extraordinary. Dwelling on this development, pro Saudi, Wahabi elements, in the meantime, accuse Erdogan of jumping into the crisis in an attempt to radicalise the Rohingya Muslims with the tenets of Muslim Brotherhood replacing the alleged Wahabi school of thought currently suspected to be guiding the Rohingya Muslims.

It therefore seems that Turkey, in order to outsmart Saudi Arabia, is trying to draw the attention of the Muslim community to phase out Wahhabism in the region. In this light, the Turkey-Saudi ideological battle has a new theatre now in Bangladesh. It would be naive to think that Erdogan and others are interested only in humanitarian assistance.

Other than external powers, media agencies too are naturally drawn towards the present imbroglio. Voice of America (VoA) has already dispatched its senior-most Bangla representative to the refugee camps to learn Rohingya lingua franca. It would appear this is happening as part of their long-term plans as western nations assess that this crisis is going to last long and therefore professional investment is being pumped in. Their interest, both strategic and tactical, may lie in developments meriting watch by both Indian and Bangladeshi intelligence to thwart any nefarious designs.

Bangladesh security and intelligence agencies are on high alert to deal with the crisis and it is presumed that India too is onboard jointly tackling the radicalisation and terror menace. Cooperation between the two countries must be taken forward to yield tangible results from the security point of view.

It may be known that only after a couple of months, Bangladesh will hold one of the biggest congregations called Vishwa Itzema — gathering of lakhs of Muslims from all over the world. Against the backdrop of the Rohingya crisis, extra vigil is needed to look out for the elements of Tablighi Jamaat, a congregation which espouses terror, attending this.

Largely, the congregation is of innocent pious Muslims but possibility of undesirable individuals or groups penetrating the gathering is a possibility. That’s to be countered or pre-empted. Given Bangladesh’s capability to contain terror, they are capable of handling the situation but the sea of human beings makes the task to put in surveillance difficult.

Judging from all the factors discussed above, extra and abundant caution seems essential to ensure de-radicalisation and security of Bangladesh. It is particularly imperative as long as Rohingyas are on the neighbouring country’s soil and their nexus with our hostile neighbour continues.

Humanitarian issues and aid etc should not be mixed up with the challenges of security faced by Bangladesh. We are going through a period of turbulence in terms of Islamic terrorism. That has to be dealt with separately and effectively. The challenge is huge but must be met in the interest of peace and stability in the region.