One should be highly suspect of Muslim grubs with doctor titles. Equally dubious are those who call themselves ‘professor’. All too often it was money that bought these titles, and title mills in Islamistan are often produced in the backrooms of barber shops. Reza Zia-Ebrahimi is not kosher. He is your typical Mohammedan headbanger with all the same hateful mental baggage that makes skilled taqiyya gigolos charge their opponents with “Islamophobia.”

That Harvard would host an Islamo-agitprop masquerading as a champion of virtue exposes the intellectual weakness, duplicity, and true intents of scholars who charge their opponents with “Islamophobia.” Coined not to spur debate but to silence it, the efficacy of “Islamophobia’s” peddlers rests far more on the prestige of their platforms rather than the rigor of their thought. Their intellectual and moral comeuppance is long overdue. 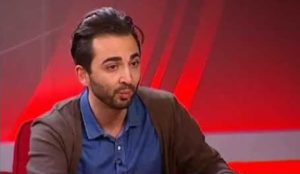 Are “Islamophobia” and anti-Semitism comparable? Reza Zia-Ebrahimi, senior lecturer in history at King’s College London, maintains that the answer is yes. Zia-Ebrahimi recently made this argument with a talk co-sponsored by Harvard University’s Saudi-funded Alwaleed Islamic Studies Program and titled, “When the Elders of Zion Relocated to Eurabia: Conspiratorial Racialisation in Anti-Semitism and Islamophobia.”

Speaking to a largely middle-aged crowd of about twenty, Zia-Ebrahimi contended that both The Protocols of the Elders of Zion—a Czarist forgery published circa 1903 alleging that Jews were plotting world domination—and Eurabia: The Euro-Arab Axis—a 2005 book by Bat Ye’or declaring the demographic and political transformation of Europe into “Eurabia”—employ conspiracy-theories that incite hatred for Jews and Muslims, respectively.

In his introduction, Zia-Ebrahimi credited the late Columbia University professor Edward Said with having originated this link by comparing Orientalism to anti-Semitism. Acknowledging that the “Israel-Palestine conflict” has “cast a long shadow on these discussions,” Zia-Ebrahimi advocated viewing anti-Semitism and “Islamophobia” as “manifestations of racism” in order to transcend these “divisions.” He described one camp as having “a tendency to be friendly to the state of Israel” and a “problem with Islamophobia,” while the other considers “Israel a colonial state” and believes in “Islamophobia.” The way to overcome these differences, he reasoned, is “to show that Jews and Muslims have been racialized.”

Zia-Ebrahimi further asserted that the two groups have suffered from conspiratorial bigotry, with the “world Jewish conspiracy” on one hand and its “Islamophobic corollary, ‘Islamicization,’” on the other. While conspiracists see Jews as seeking financial control, they see Muslims as “bent on our destruction” through “demographics,” he claimed.

While acknowledging that Eurabia and the Protocols “are two very different texts,” Zia-Ebrahimi maintained that they share certain qualities: representing “Jews and Muslims as a monolithic pack,” “supernatural reimagination” whereby the “most vulnerable sectors of society are perceived as almighty,” and claiming that “both Jews and Muslims benefit from a “European fifth column,” such as socialism or internationalism.

Zia-Ebrahimi focused the bulk of his talk on Eurabia, ostensibly because the Protocols have “been extensively studied.” Yet his hostility for Bat Ye’or and her book drove – and distorted – his presentation. Referring gratuitously to Egyptian-born Ye’or’s “European Jewish heritage,” he correlated her critique of Islam with “Lebanese Christian militias” and “Serbian ultranationalists.”

Zia-Ebrahimi excoriated Ye’or for associating Islam with “jihad,” “genital mutilation,” and “stoning,” and implying that its “principal urge is to subjugate Jews and Christians.” Eurabia, he proclaimed, “assumes all Muslims agree on sharia and want to impose it on everyone else” and above all, portrays a “diabolical Islamic civilization actively scheming destruction of Europe.”

Never once did Zia-Ebrahimi address the reality of such practices within Islam, nor the fact that Islamists advocate Islamic supremacism and are implacably hostile to Europe – seen as Christendom. In his eagerness to whitewash all things Islamist, Zia-Ebrahimi ignored the multiple terrorist attacks throughout Europe and the often-contorted Western reaction to Islamist aggression.

True to his biases, Zia-Ebrahimi lambasted a “coterie of counter-jihadi authors” such as Robert Spencer, Melanie Phillips, and Mark Steyn, and academics like Bernard Lewis, Niall Ferguson, Martin Gilbert, and Robert Wistrich for supporting and legitimizing Ye’or’s work. He savaged Ibn Warraq, Ayaan Hirsi Ali, and “others referred to as ‘Muslim dissenters’” for adopting the “same discourse” in order to “be salvaged” from their “Muslimness.” Falsely conflating valid criticism and introspection with hatred and violence, Zia-Ebrahimi described the 2011 Anders Behring Breivik killings in Norway as the natural outcome of this line of thought.

While Zia-Ebrahimi’s premise seemed at first intriguing, if flawed, his mention of the Protocols and alleged concern for anti-Semitism were in the end little more than a pretext for attacking Bat Ye’or, Eurabia, and critics of Europe’s lenient—some might say culturally suicidal—policies toward its growing Muslim population. In denying any legitimacy to these widespread concerns, and in failing to support his argument with hard evidence, Zia-Ebrahimi exposed as disingenuous his contention that anti-Semitism and “Islamophobia” are twin evils of equal force.

That Harvard would host an Islamist apologist masquerading as a champion of virtue exposes the intellectual weakness, duplicity, and true intents of scholars who charge their opponents with “Islamophobia.” Coined not to spur debate but to silence it, the efficacy of “Islamophobia’s” peddlers rests far more on the prestige of their platforms rather than the rigor of their thought. Their intellectual and moral comeuppance is long overdue.