The current state of Western civilisation is Western people facing complete annihilation within 3-4 generations, and this wasn’t a mistake. 2 people injured after an AXE attack near Copenhagen, Denmark

Another news story you won’t read about unless, of course, they can make up a ‘white supremacist’ tie-in. But this Muslim-looking man is hardly “white” (which no longer means color, but ideology)- a supremacist for sure, but not white.

An update on this story. Not only has this man apparently robbed a bank, but he seems to have stolen a car as well. He doubtless considers that Infidel money and property belong to him by right. Non-Muslims paying for the upkeep of Muslims is a Qur’anic dictate:

This fellow has also just been released from prison, illustrating yet again that prison sentences do nothing to disabuse jihadis of their attachment to jihad. 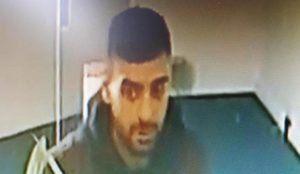 “He targeted the Crusaders with his rifle”

The Targeting of a Christian Church in Kizlyar City of Dagestan

Putting his trust in Allah, one of the zealous soldiers of Islam, Khalil ad-Dagestani (may Allah accept him) set out towards the Christian temple of George in Kizlyar city in Dagestan. He targeted the Crusaders with his rifle, killing 5 of them and wounding 4 others, and to Allah belongs all honor, and to His messenger, and to the believers, but the hypocrites don’t know, and all praise is due to Allah.

Not that this has anything to do with Islam and all that…..

War in Afghanistan: Threat of attacks ‘worse than ever’

After 17 years of fighting the capital is still insecure, with more than 10,400 civilians killed or injured in 2017.

The perpetrator of an axe attack during the weekend in Birkerød has probably committed a bank robbery in Ringsted today.

“The Central and West Zealand Police are working on a thesis that the perpetrator of the robbery may be identical to the perpetrator who stabbed people in an attack at a gas station in Birkerød on Saturday,” the police said.

A young couple was accosted on Saturday, February 17th, by a man attacking them with an axe outside a Circle K tank station in Birkerød. The pair was hit in the head and on the upper body, but their injuries are not life-threatening. The suspect had been released from prison ten days before, after serving a sentence of three years.

The robbery took place at Danske Bank on the square in Ringsted around 12:36, where the robber threatened the cashier by using a knife.

“A man threatened the staff with a knife and was given a cash sum, which he put in a carry-on bag,” the police say.

The police are currently present in Ringsted and are looking for a younger man who is 170-175 cm tall, thin and with brown skin.

He has short, slightly curly hair and was wearing a red-brown jacket, black hoodie sweatshirt, dark cowboy trousers, shoe with light soles and a dark hat.

According to police information, the robber fled from the place in a silver-gray 2003 Hyundai Getz with license number VJ 57 665.

The car was stolen last night around 22:35 from Frederikssundsvej in Copenhagen’s northwestern quarter; the car keys were sitting in the ignition.

According to witnesses on the spot, the car fled on Bøllingsvej in Ringsted towards the hospital and from there on in an unknown direction.