It seems as if authorities the world over, with very few exceptions, have determined that this is the one group to whom everyone must kowtow. And that is because some of them have a disturbing tendency to react to being “offended” by murdering people. In the fifth grade, everyone was told that the way to get rid of a bully was not to give in to him, but to stand up to him. Those days are gone now. Everyone agrees that all people must give in to these bullies.

BUSINESSES marking the coming Chinese Year of the Dog in Malaysia have stopped displaying images of canines on their decorations and souvenirs over fears it will upset Muslims who live in the country and consider the animals unclean. 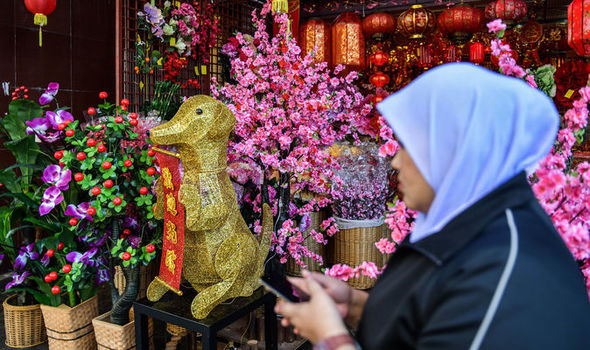 Many Muslims consider dogs to be unclean

The country has a large Chinese population who are preparing to welcome in the new year.But some shopping malls have decided not to have images of dogs, sparking an online backlash, CNN reported.

Malaysia has a growing Islamic population, with many Muslims observing the practise of ritually washing themselves if they come into contact with a dog.

One shopkeeper at the Sunway Pyramid near Kuala Lumpur said: “This is a multiracial country, when they do something like that it shows disrespect to the Chinese race here.

You bet it does. The honour of Islam lies in insulting the kafir. That’s basic Islam 101.
“If this is the case they should just make this only an Islamic country, but we have Buddhists, Hindus and other religions as well here.”Another shopping mall in the popular Kuala Lumpur tourist area of Bukit Bintang did not depict dogs in its decorations ahead of the new year, focusing instead on the 10th anniversary theme of the centre, Pavilion Kuala Lumpur.

She said: “One of the considerations we take in when we work on decoration concepts for Pavilion KL is to create something highly experiential and also to be socially accepting for all.”

But Chinese Malaysian Wong Wei-Shen, who has several dogs as pets, said businesses were being “ridiculous”.

He said: “It’s a shame because Malaysia is a multicultural country. To dismiss the fact that the Chinese have a dog as one of the zodiac animals is unfair.

“Every zodiac animal has its good attributes, and the dog represents a guide, a best friend, a comforter and loyal friend.”

Twelve animals, including a dog and a pig, another animal Muslims consider as unclean, make up the traditional Chinese zodiac.

Multicultural Malaysia has seen an increasing intolerance towards activities considered insulting to Islam, reflected in protests in recent years of beer festivals and concerts.While Muslim Malays are the biggest ethnic group among Malaysia’s 32 million people, Chinese make up the second-biggest group with 23 percent of the population.

Malaysian Muslim leaders have been vocal about events that involve dogs before.

After the 2014 Commonwealth Games opening ceremony in Glasgow, when athletes paraded with a Scottish terrier donning their country’s name, local politicians aired their disproval, calling the stunt “disrespectful”.

In 2016, religious authorities asked popular pretzel chain Auntie Anne’s to change the name of its “Pretzel Dog” to “Pretzel Sausage”.