This kind of treason can’t be committed without the government being complicit:

It comes amid a frightening trend of women having sought ‘more active roles’ in jihad following the rise of IS. 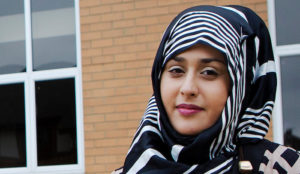 “GP reveals how she is trying to free returning jihadi brides from ISIS control as critics demand answers as to why they have been allowed to ‘slip back into Britain,’” by Abul Taher and Nick Craven, Mail on Sunday, February 25, 2018:

Deradicalization programs, upon which the West has placed so much hope, have long been an obvious failure. In fact, they have never succeeded anywhere, and this one won’t succeed, either. How likely is it that a Muslim woman who clearly believes in Sharia, hence her hijab, will disabuse these women of the Sharia imperative to wage war against unbelievers?

Such programs are based on the premise that the true teachings of Islam are peaceful, and so all that needs to be done is show the jihadis how they’re misunderstanding the Qur’an and overlooking its teachings of peace, and all will be well. But since the Qur’an and Sunnah are full of commands to make war against and subjugate unbelievers, the idea that jihadis can be “deradicalized” by reference to them is just a myth told to Infidel authorities to lull them into complacency.

Well, let’s see. De-radicalization programs have been implemented elsewhere, notably in Indonesia and Saudi Arabia. Let’s look at how they fared. From the Jihad Watch archives:

Graduate from Saudi jihadi rehab program killed in Syrian jihad: “killed a large number of Christians before his acceptance by God”

Former Guantanamo detainee now top al-Qaeda ideologue — “He was transferred to Saudi Arabia in 2006 where he was placed in a national rehabilitation project.”

Indonesian government admits that its jihadist rehab program is a failure

And in the West:

France’s only jihadi “deradicalization” center is closing — it was voluntary, and it was empty

Jihadi brides who have returned from Syria after joining the Islamic State terror group are being ‘deradicalised’ at taxpayers’ expense.

More than a dozen women have so far gone through a controversial secret counselling programme run by Angela Misra. The GP has spoken for the first time of her work trying to free the women’s minds from the iron grip of IS’s poisonous ideology.

The news came as the EU’s border agency Frontex warned yesterday that 1,000 more jihadi brides – and widows – are heading for Europe from the collapsed caliphate in Syria and that they posed an ‘evolving’ threat….

Dr Misra and her husband Usman Raja, a former cage fighter, rehabilitate the women – whose identities have not been revealed – at a secret location. About 18 former IS men have also gone through the programme.

But critics question why the returnees were even allowed back. Defence Secretary Gavin Williamson said bluntly last year: ‘A dead terrorist can’t cause any harm to Britain.’

Other experts wonder why the jihadi brides have not been charged with terror offences and their names publicised – not least because hardliners going through the programme are still hellbent on establishing a caliphate elsewhere.

But Max Hill QC, the independent reviewer of terrorism legislation, has warned of the danger of ‘losing a generation’ of men and women by automatically using the courts to punish them, and he urged reintegration….

One thought on “Treason on an unimaginable scale”