“French investigators believe they have identified the hostage-taker. The man is known to the intelligence services and flagged in a database of radicalized Islamist militants, Franceinfo reported.”

How many “radicalized Islamist militants” are walking around freely in France? Why wasn’t this man under surveillance? Just too many jihadis for French authorities to keep track of?

And remember: CNN wants you to think of the phrase “Allahu akbar” as a “celebration of life.”

The shooter is believed to be holed up in a Super U store in Trèbes, near Carcassonne

A GUNMAN yelled “vengeance for Syria” as he shot a policeman in a French town today, disturbing reports claim.

The shooter is alleged to have killed a butcher before taking eight hostages at a Super U store in Trèbes, near Carcassonne, in a suspected terror attack. 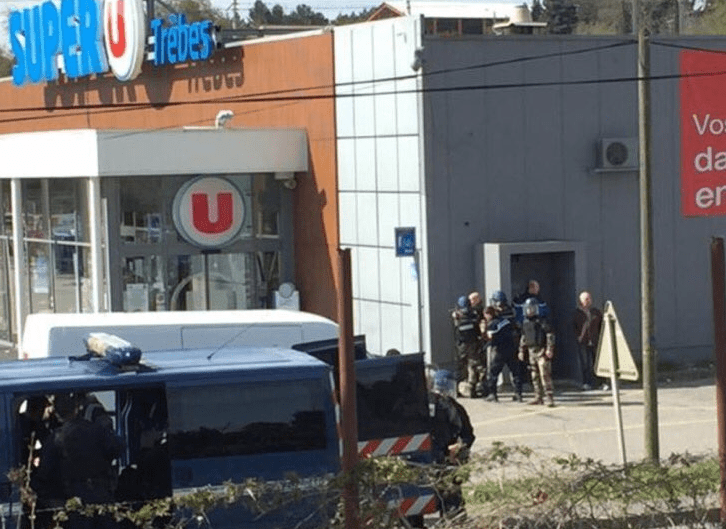 “A butcher in the U-Supermarket has been shot dead,” according an unnamed source in the town. “The gunman was heard shouting slogans about the war in Syria. He says he is representing Islamic State.”

“He pulled out a gun and fired five times, wounding one officer,” said another source in Trebes who claims to have seen the man carrying grenades.

Trebes mayor Eric Menassi confirmed the attack and said seven hostages have since been released, leaving the gunman alone in the supermarket with another police officer.

He shot at reserve police officer who were jogging down the street, injuring one, according to the M6 website. Police are reported to have surrounded the supermarket in southern France.

French Interior Ministry said confirmed an operation was underway at the supermarket but gave no further details on reports of a hostage situation.

AFP has reported that ISIS took responsibility for the attack but the weakened terror group often does this as a propaganda tool, even when it is not associated with an incident.

There are conflicting reports amid the chaos of the shooting, with L’independentclaiming two men shot at the cops from inside a car.

2 thoughts on “Terror in France: ‘REVENGE FOR SYRIA!’”