Yes, we need positive stories. That will fix everything. If people will just stop reporting about Muslim migrant crimes and rapes, and jihad terror attacks, and all the rest, then those racist, xenophobic, Islamophobic Europeans will stop worrying and love the Muslim migrant influx, and all will be well and all manner of thing will be well.

Except for one thing. Those crimes and rapes and jihad terror attacks will keep on happening, and Europeans will be in full surrender mode, because any resistance is stigmatized as racist and “Islamophobic.” 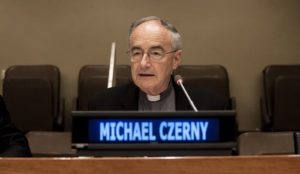 “Vatican Seeks to ‘Change the Narrative’ on Immigration by Emphasizing the Positive,” by Thomas D. Williams, Breitbart, March 11, 2018 (thanks to Robert Spencer):

The Vatican is looking to change people’s perspective on mass migration by highlighting positive stories to replace the negative accounts that dominate the media. Vatican Seeks to ‘Change the Narrative’ on Immigration, Emphasize the Positive

Jesuit Father Michael Czerny, the co-secretary of the Vatican’s department for migrants and refugees, said that the Church needs to “change the narrative” on immigration, because “the public view is negative” in an address to members of the International Catholic Migration Commission on March 7.

“We need positive stories,” Czerny said, in order to help people appreciate the benefits of migration instead of always focusing on its problems.

As Breitbart News has reported, “Migrant” was the most commonly used word in Italian newspaper headlines during the year 2017, and most of the stories dealt with the arrivals of thousands of migrants into Italy from North Africa, migrant violence and crimes, and political debates regarding how to address Italy’s migrant crisis.

The pro-immigration, George Soros-funded lobby group Carta di Romalamented that the word “migrant” appeared 2,455 times in headlines, stoking people’s fears of immigration when they should be embracing it. The group also inadvertently noted that the crime rate has fallen off significantly as the number of immigrant arrivals has dropped.

The group has been working to purge journalistic language of all references to migrants that could carry a negative connotation, including such terms as “illegal immigrants.”

In 2017, the Carta di Roma proposed a list of taboo terms related to immigration that should be eliminated from news reporting, including expressions that underscore the ethnicity of certain migrant groups or their illegal status. Terms like “clandestini” (clandestine migrants), “zingari” (gypsies), “nomadi” (nomads), “extracomunitari” (those coming from outside the European Union) and others like them are marked for expurgation.

Even precise terms such as “Albanian,” “Maghrebi” and “Chinese” should be excluded from news reports, the association contends, because today, such terms “are no longer neutral.” The group also insists that the ethnic origin of perpetrators of crimes should not be mentioned in news stories so as not to create an association of malfeasance with migrants.

“Islamic extremists” should simply be referred to as “extremists,” their guide declares, to avoid stirring up prejudice against Muslims.

Speaking with the Catholic News Agency this week, Father Czerny said that there is a natural tendency to “scapegoat” migrants and people who are different from us, especially when we are suffering political, social and economic unrest.

The prevalent negative narrative on the migration issue has nothing to do with migrants and refugees, who have “enormously enriched” modern societies, Czerny contends, but reflects “a misplaced disappointment with our leaders.”

Migrants and refugees “are being scapegoated,” he said. “So, I think by telling the truth and by telling positive stories, that’s how I hope we can reverse that narrative.”… German Media Confess to Underestimating Steve Bannon: He Is ‘as Dangerous as Ever’

Sadiq Khan Warns Silicon Valley: Censor the Deplorables… Or Else!