Smail Ayad is just another manifestation of the global outbreak of mental illness, you see. Nothing to see here. Go back to sleep, you kuffar. This was just an attack by a “mentally unstable Frenchman.” Happens all the time.

“He claimed to have no or limited memory of the attack, which reportedly started when he yelled ‘Allahu Akbar’. But terrorism was ruled out as a motive for the attack after he was found by psychiatrists to be of ‘unsound mind’.”

Police have said that Smail Ayad had “no extremist motive,” despite screaming “Allahu akbar” as he stabbed Mia Ayliffe-Chung to death. They said he had unrequited love for Ms. Ayliffe-Chung, and that drove him to murder.

Australian authorities doubtless dismissed any terrorism connection because Ayad had no ties to terror groups. What they missed, they missed because they refuse to consider Islam in their studies of terrorism. Ayad shows the tendency among Muslims to react with a murderous rage that they associate with religious fervor when they are denied, frustrated, rejected. Is it really wise for Australia or any other country to import large numbers of people who believe that Allah will punish Infidels by their hands (cf. Qur’an 9:14) and that therefore, if they believe an Infidel has wronged them, may decide to become executors of the divine wrath? 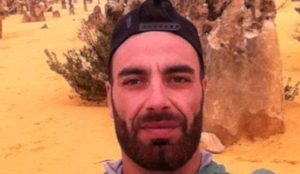 “‘Did she feel pain?’ Weeping mother of murdered British backpacker reveals she lies awake ‘thinking about my daughter’s last moments’ as the mentally unstable man who killed her and another Brit has murder charges DROPPED,” MailOnline, April 5, 2018 (thanks to David):

The weeping mother of a murdered British backpacker has revealed she lies awake thinking about her daughter’s final moments – as the mentally unstable Frenchman who killed her had his charges dropped.

Smail Ayad, 30, dragged British backpacker Mia Ayliffe-Chung, 21, from her bed at the hostel, in the state’s north, and stabbed her multiple times in August 2016.

He killed her and another Brit – 30-year-old Tom Jackson – but on Thursday, criminal charges against Ayad were dropped and he was sent to a mental health facility.

Mia’s mother Rosie Ayliffe wept as she told the Brisbane Mental Health Court that she was haunted by thoughts of her only child’s last moments, wondering if she felt pain and whether she knew ‘she was going.’

Ms Ayliffe, from Wirksworth, Derbyshire, cried as she read from her victim impact statement.

She spoke of tributes that had come in from all over the word acknowledging her daughter’s kindness and how tolerant of others and full of love she was for all those she met.

‘Many, many nights I lie awake thinking about my daughter’s last moments and how it must have felt to her to lie dying,’ she told the court.

‘Did she feel pain? Did she know she was going? The images haunt me.’

She said she wanted everyone to understand that the man’s acts of violence had robbed her world of her beloved daughter, who had everything to live for.

‘I am proud to have been her mother and I will hold her in my heart until I die,’ she told the court.

Court heard Ayad sufferred a ‘psychotic episode’ before going on a stabbing frenzy in the backpacker hostel, which began when he repeatedly stabbed Ms Ayliffe-Chung in her bedroom.

He claimed to have no or limited memory of the attack, which reportedly started when he yelled ‘Allahu Akbar’.

But terrorism was ruled out as a motive for the attack after he was found by psychiatrists to be of ‘unsound mind’….

The father of a man killed in a horrific attack that left two British backpackers slain in north Queensland has said he feels sorry for the attacker’s family – even after finding out he will never face a murder trial.

Speaking exclusively to A Current Affair, Les Jackson says he accepts the Mental Health Court’s decision not to pursue murder charges against French national Smail Ayad, following his psychotic rampage two years ago that claimed the life of Les’s son Tom, and his friend Mia Ayliffe-Chung.

Tom, 30, and 20-year-old Mia were working on a farm in Home Hill, south of Townsville, as part of the requirement to undertake 88 days of farm work to secure a second year on their 417 Visas.

Les Jackson says he accepts the Mental Health Court’s decision to not pursue murder charges against Smail Ayad over the death of Mr Jackson’s son Tom.Smail Ayad will not face murder charges over his stabbing spree that saw two slain.

The Mental Health Court heard it was almost midnight on August 23, 2016, when Ayad armed himself with a knife and went on the attack, first stabbing Mia in the chest, then turning the weapon on Tom as he tried desperately to help his fellow British friend.

However, Mr Jackson said while he did not feel sorry for Ayad, he did hold sympathy for his family.

“That someone you brought into the world did that. I don’t know how you’d cope.

“I think it would be more difficult to cope with.”

The court heard from a number of psychiatrists who came to the conclusion Ayad was suffering from paranoid schizophrenia after years of drug abuse, and on that night, believed people were plotting to kill him.

Tom and Mia were killed during a psychotic rampage by Ayad, who has been found to have been suffering paranoid schizophrenia.Smail Ayad faces potentially years in medical custody.

“I guess I could get angry over it, but what good would that do? I can’t bring Tom back,” he said.

Mr Jackson said he didn’t want to “waste anymore of my life” thinking about Ayad.

He said the ruling did not mean Ayad would be walking around free.

“He’s observed all the time. He won’t be coming out where he is for a very long time.

“The logical conclusion potentially…is maybe they should hang him for what he did? Well, I just don’t see that serving any purpose whatsoever.”

Rosie, the mother the other victim Mia Ayliffe-Chung, agreed.

In a statement, she recognised that the judge was trying to ensure Ayad would be kept in custody for a minimum of 10 years and that he’d be on medication for the rest of his life.