Trump: Iran Not Messing with Me like It Did Obama Rouhani to Trump: ‘You Are a Businessman’ and Know Nothing About Politics

Yes, Trump is a businessman,  he means business. Trump is getting things done. Something the mad mullahs of Iran cannot be accused of.

Iran’s top dog Khamenei: “All Muslim nations should stand united against America and other enemies”

Islamic entities keep telling us this is a religious war. Policy analysts in Washington keep telling us it isn’t. Who is right? The evidence of the last seventeen years ought to establish that well enough for any neutral observer, but if you know someone who is still on the fence, preorder a copy of The History of Jihad From Muhammad to ISIS for them here. The record of the last fourteen centuries speaks for itself, and clearly, but this record is almost completely unknown in the U.S. today. 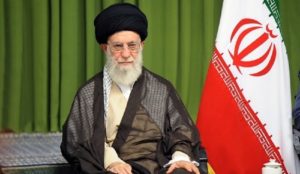 ANKARA (Reuters) – …”The Iranian nation has successfully resisted bullying attempts by America and other arrogant powers and we will continue to resist… All Muslim nations should stand united against America and other enemies,” Ayatollah Ali Khamenei said.

Iran’s top authority criticized Trump for saying on Tuesday some countries in the Middle East “wouldn’t last a week” without U.S. protection.

“Such remarks are humiliation for Muslims … Unfortunately there is war in our region between Muslim countries. The backward governments of some Muslim countries are fighting with other countries,” Khamenei said….