“Al-Andalus” is the Arabic name given to those parts of Spain, Portugal and France that formed the caliphate established and governed by the conquering Muslim Moors between 711 and 1492.

The rhetoric could hardly be more menacing. “Spain is the land of our forefathers, and we are going to take it back with the power of Allah,” declares Islamic State.

It would be fallacious in the extreme that these views are solely the views of a bunch of fanatical ISIL adherents. The desire to reconquer  al Andalus lies at the heart of every believing Muselman. (SY)

Since the establishment of the Spanish Inquisition in 1478, it adds, “Spain has done everything to destroy the Koran … Spain is a criminal state that usurps our land.” It goes on to claim Muslims have been “burned alive” in the Iberian nation and demands that faithful jihadists should set out to kill Spanish “infidels” by “reconnoitring airline and train routes for attacks” and “poisoning food and water with insecticides”. 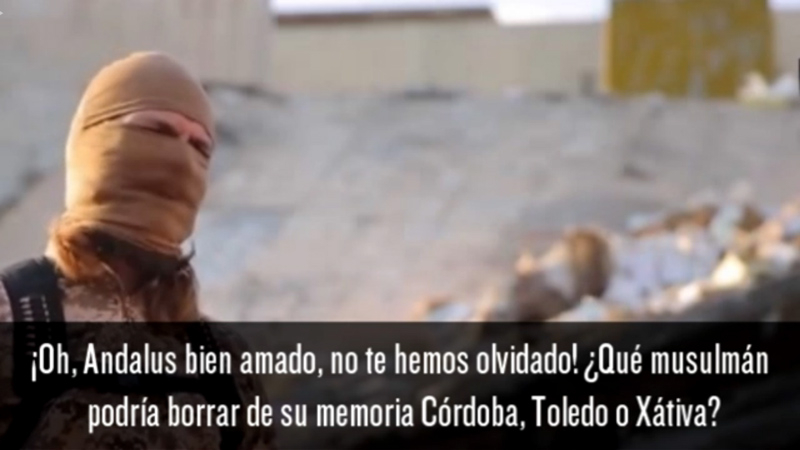 An armed, masked Islamic State jihadist appears in a propaganda video, where he warns Spain that it would “pay a very heavy price” for expelling Muslims from al-Andalus hundreds of years ago. The Spanish subtitle above reads “Oh dear Andalus! You thought we forgot about you. I swear by Allah we have never forgotten you. No Muslim can forget Córdoba, Toledo or Xàtiva.”
.

Ten members of an Islamic State jihadi cell have been sentenced to combined prison terms of nearly 100 years for a plot to bomb landmarks and behead infidels in Barcelona.

The cell, composed of five Moroccans, four Spaniards and a Brazilian, was separate to and independent of the jihadi group that killed 16 people in Barcelona and nearby Cambrils in August 2017.

The case shows that Spain continues to be a prime target for jihadis, many of whom are striving to reconquer al-Andalus, the Arabic name given to those parts of Spain, Portugal and France occupied by Muslim conquerors (also known as the Moors) from 711 to 1492. Many jihadis believe that territories Muslims lost during the Christian Reconquest of Spain still belong to the realm of Islam, and that Sharia law requires them to re-establish Muslim rule there.

The court heard how the jihadi cell — called “Islamic Fraternity, Group for Preaching Jihad” — was created in 2014 at a mosque in Terrassa, a city located 30 kilometers from Barcelona, with the objective of creating a global Islamic Caliphate.

Prosecutors said the cell’s “sole purpose and motive was to fulfill and serve the objectives of the Islamic State and to carry out, at any time, an attack on institutions such as the police, banks or Jewish interests.”

The cell’s leaders — Antonio Sáez Martínez (a Spanish convert to Islam also known as “Ali the Hairdresser”) and Lahcen Zamzami and Rida Hazem, both of Moroccan nationality — reportedly believed they could reach paradise “by attacking institutions, entities, organisms and symbols of Western culture.”

The group had originally intended to join the Islamic State in Syria, but after three members were arrested at the Bulgarian border with Turkey, its efforts were refocused on Spain.

The 98-page court ruling describes the so-called Operación Caronte (in Greek mythology, the ferryman of Hades), in which Spanish and Catalan counter-terrorism police meticulously tracked and surveilled the cell members, some of whom were observed taking photographs of Barcelona’s most emblematic locations, including train stations, luxury hotels, shopping malls and police stations, as well as the Catalan parliament.

Sáez Martínez also plotted to kidnap random members of the public, and, emulating the Islamic State, dress them in orange jumpsuits and behead them. The crime was to be filmed and shared on social media.

During police raids, police found explosives, and vast amounts of literature on jihad and bomb-making, as well as on European terror groups. These included the Basque separatist group ETA and Germany’s far-left Red Army Faction.

With two notable exceptions — the March 2004 attack in Madrid and the August 2017 attack in Barcelona — Spanish counter-terrorism police have been successful at thwarting violent jihad by identifying, surveilling and arresting Islamists in the country before they attack.

Since the March 2004 attacks on Madrid’s trains, Spanish authorities have arrested more than 750 jihadis in 243 counter-terrorism operations, according to the Interior Ministry.

In 2017, 84 jihadis were arrested in 51 operations, according to the International Observatory of Terrorism Studies (Observatorio Internacional de Estudios sobre Terrorismo, OIET). This compares to 76 arrests in 2016 and 102 arrests in 2015.

Jihadis remain undeterred. A recent Islamic State document included a list of grievances against Spain for wrongs allegedly done to Muslims since the Battle of Las Navas de Tolosa on July 16, 1212, when the Christian forces of King Alfonso VIII of Castile routed the Almohad Muslim rulers of the southern half of the Iberian Peninsula. More than 100,000 Muslims were killed in the battle, which was a key victory in the Catholic Monarchs’ “Reconquista” of Spain.

The Islamic State document stated that since the establishment of the Spanish Inquisition in 1478, Spain “has done everything to destroy the Koran.” It said that Spain tortured Muslims, including burning them alive. Therefore, according to the Islamic State, “Spain is a criminal state that usurps our land.” The document calls on jihadis to “reconnoiter airline and train routes for attacks.” It also calls on followers to “poison food and water” with insecticides.

The document concluded: “The actions of your ancestors are the reason for our actions today.”

The epicenter of jihadism in Spain is in independence-minded Catalonia, which has the highest Muslim population in Spain and is one of the most Islamized regions of the country. Catalonia has 7.5 million inhabitants, including an estimated 510,000 Muslims, who account for around 7% of the total Catalan population. In some Catalan towns, however, the Muslim population is above 40% of the overall population.

A five-page American diplomatic cable, dated October 2, 2007, described the link between mass immigration to Catalonia and the rise of radical Islam in the region:

“Heavy immigration — both legal and illegal — from North Africa (Morocco, Tunisia, and Algeria) and Southeast Asia (Pakistan and Bangladesh) has made Catalonia a magnet for terrorist recruiters. … The Spanish National Police estimates that there may be upwards of 60,000 Pakistanis living in Barcelona and the surrounding area; the vast majority are male, unmarried or unaccompanied, and without legal documentation. There are even more such immigrants from North Africa. … They live on the edges of Spanish society, they do not speak the language, they are often unemployed, and they have very few places to practice their religion with dignity. … Individually, these circumstances would provide fertile ground for terrorist recruitment; taken together, the threat is clear….

“There is little doubt that the autonomous region of Catalonia has become a prime base of operations for terrorist activity. Spanish authorities tell us they fear the threat from these atomized immigrant communities prone to radicalism, but they have very little intelligence on or ability to penetrate these groups.”

In his book “Jihadism: The Radical Islamic Threat to Catalonia,” Catalan terrorism analyst Jofre Montoto estimated that at least 10% of the Muslims in Catalonia are “hardcore believers in the doctrine of jihadism.”

Many of Catalonia’s problems with radical Islam are self-inflicted. In an effort to promote Catalan nationalism and the Catalan language, Catalonian pro-independence parties have for decades promoted immigration from Arabic-speaking Muslim countries, in the belief that these immigrants (unlike those from Latin America) would learn the Catalan language rather than speak Spanish.

Spain’s leading terrorism analyst, Fernando Reinares, has warned that the separatist movement in Catalonia is impeding cooperation at the national level in the fight against jihadism:

“There is a problem in the management of Muslim communities, which I think has been aggravated by separatist tensions; a real problem of cooperation is in the detection of radicalization processes and in the pursuit and dismantling of cells, groups and networks that has also been complicated in the context of the current political tension in this autonomous community.”

As details emerged of the August 17, 2017 jihadi attack in Barcelona, the evidence pointed to one overarching conclusion: the carnage could have been prevented if a series of red flags had not been either missed or ignored.

On December 20, 2016, one day after a Tunisian jihadist drove a truck into a Christmas market in Berlin, killing 12 people and injuring 56, Spanish National Police issued a circular ordering all central, regional and municipal police departments in Spain to “implement physical security measures to protect public spaces” to prevent jihadi attacks “in places with high numbers of people.” The circular advised:

“Municipalities should protect these public spaces by temporarily installing large planters or bollards at access points to hinder or prevent the entry of vehicles.”

The measures were never implemented in Barcelona because the leaders of the Catalan independence movement did not want to be seen as taking orders from the central government in Madrid.

4 thoughts on ““We will recover al-Andalus, Allah willing””