Winnie Mandela, like her terrorist husband, was a communist.

Not only. She was also a psychopath & a killer.

She won the Pirelli Peace Prize

Winnie Mandela, the shame of South Africa, has died at 81.

“With our boxes of matches and necklaces we will liberate this country.”

Necklacing was the deceptively innocent term for putting a petrol-soaked burning tyre around a perceived traitor’s neck. Most notoriously, she was found guilty of ordering the kidnapping of a 14-year-old boy, Stompie Seipei, who was beaten and later had his throat slit.

Madikizela-Mandela was acquitted of all but the kidnapping, but the incident remains the greatest stain on her record; years later, she was convicted of more than 40 charges of fraud.

As Verashni Pillay put it in 2014: “If this is the mother of our nation, I’d prefer it if we be left semi-orphaned.”

Appearing at the Truth and Reconciliation Commission set up to unearth atrocities committed by both sides in the anti-apartheid struggle, Madikizela-Mandela refused to show remorse for abductions and murders carried out in her name.

Only after pleading from anguished TRC chairman Archbishop Desmond Tutu did she admit grudgingly that “things went horribly wrong“.

In its final report, the TRC ruled that Madikizela-Mandela was “politically and morally accountable for the gross violations of human rights committed by the MUFC”.

That would be the Mandela United Football Club, which didn’t play much football.

The monster who was Winnie Mandela has died. An ABC report, while acknowledging her crimes, carries the headline “Winnie Mandela was as turbulent and transformative as the times she lived in.”

Excuses, excuses. I prefer to focus on her crimes. From Lucas Rosas:

“The post-Apartheid Truth and Reconciliation Commission found that MK [“Umkhonto we Sizwe” or “Spear of the nation”] maintained clandestine prison camps both in South Africa and sympathetic neighbouring countries for any black person thought to be collaborating with the white authorities. In these camps torture and summary executions were (in the words of the commissioners) “Routine”. In the slums and shantytowns, ANC sympathisers (led by Mandela’s wife Winnie) usually didn’t bother with camps, they just “necklaced” suspected informers.”

With respect to Winnie Mandela. Rest In Peace.

WINNIE: TEARS FOR A TYRANT

The Left is in tears for Winnie Mandela, who has died. The United Nations’s UN Women, Jesse Jackson, Sharon Stone, Viola Davis and Yassmin Abdel-Magied et al salute a woman who called for the “necklacing” of opponents and alleged collaborators with the South African regime – murdering them by putting a burning tyre around their neck.

Mandela was also convicted for fraud and, most infamously, for the kidnapping by her notorious gang of a black 14-year-old who was tortured and later found with his throat cut.

Mrs Madikizela-Mandela … was accused of conducting a virtual reign of terror in parts of Soweto by other members of the ANC in the late 1980s, and heard backing the practice of “necklacing” – putting burning tyres around suspected informants’ necks.

She was also found guilty of kidnapping and sentenced to six years’ imprisonment for her involvement in the death of 14-year-old township militant Stompie Seipei. She always denied the allegation, and the sentence was reduced to a fine.

Stompie Seipei was killed on Winnie Madikizela-Mandela’s instructions to prevent the Mandela “crisis committee” discovering how badly the Mandela United Football Club had assaulted four youths they had abducted from the Soweto Methodist Manse, the Truth and Reconciliation Commission heard on Wednesday.

Former club “coach” Jerry Richardson testified that Madikizela-Mandela decided to kill Seipei to cover up what had happened.

The Mandela crisis committee, made up of church, community and ANC leaders, was formed to secure the release of four boys, including Seipei, who were abducted from Methodist minister Paul Verryn’s manse in late December 1988….

He said Madikizela-Mandela had participated in the beating, punching the youths with her fist. The youths were later sjambokked and lifted into the air and dropped onto the concrete floor.

Richardson said the football club had tortured youths in “horrible, brutal ways… in the manner used to torture freedom-fighters (by the police)”.

A few days later, Richardson and “Slash” took Seipei to the site in Noordgesig they had chosen. Richardson said he had to help Seipei walk because “he was very sick and very weak”.

When they reached the site, Richardson said he made Seipei lie on his back and separated a pair of garden shears.

He said he stabbed Seipei in the neck.

That was probably not the only such murder. From 2013:

The family of Siboniso Shabalala says it believes he was killed by the captain of the Mandela United FC – on orders from Winnie Madikizela-Mandela.

The remains of two men were exhumed by the National Prosecuting Authority (NPA) last week. NPA officials believe the bones are of those of Shabalala and his friend Lolo Sono.

The pair, who were both involved with the ANC’s armed wing Umkhonto weSizwe, have been missing for 24 years.

They were last seen at Madikizela-Mandela’s house and appeared to have been severely beaten.

Shabalala’s family said they received a letter from Mandela United FC captain Jerry Richardson a number of years ago in which he confessed to the murders, saying he was instructed to kill the men by Nelson Mandela’s former wife.

Nico Sono, a taxi driver and former ANC activist involved in gun-running, was a man with sad eyes who lived in a small shack a mile or so from where Winnie’s family lived in an opulent building with a swimming pool. Lolo, his eldest son, was abducted by members of the notorious Mandela United football club, a group of thugs who were devoted to Winnie and had been linked to a series of murders in black townships during the apartheid era.

‘Winnie Mandela appeared outside my home in a vehicle with Lolo,’ Sono told me. ‘Lolo was bleeding and badly bruised. She accused him of being a police informer, just because he had been taken in for questioning. I begged, I pleaded, for Lolo’s life. She said the movement would decide what to do with him and that he was a dog. They drove off. I have never seen my son again.’

Cradling a picture of Lolo, Sono’s wife Carolyn fought back tears. ‘It has been terrible,’ she said. ‘We know that Lolo was killed. We just want his bones back so that we can bury him. I will ask her [Winnie Mandela] the same thing until the day I die: give us the bones of our son.’

A former close friend of Mandela:

When the screams of the victims became too loud, Xholisa Falati was ordered to sing rousing African revolutionary songs at the top of her voice. ‘If you did not follow Winnie Mandela’s orders,’ Falati said simply, ‘you would die.’

So Falati would sing, her voice ringing out across the dark streets of Soweto, to mask the cries of young black activists who were being tortured under interrogation inside the house of the woman then revered as the Mother of the Nation.

And here Mandela is (at 3:01) crying “with our necklaces we will liberate this country”:

Like this: When the Truth and Reconciliation Commission tried to confront Mandela with her crimes 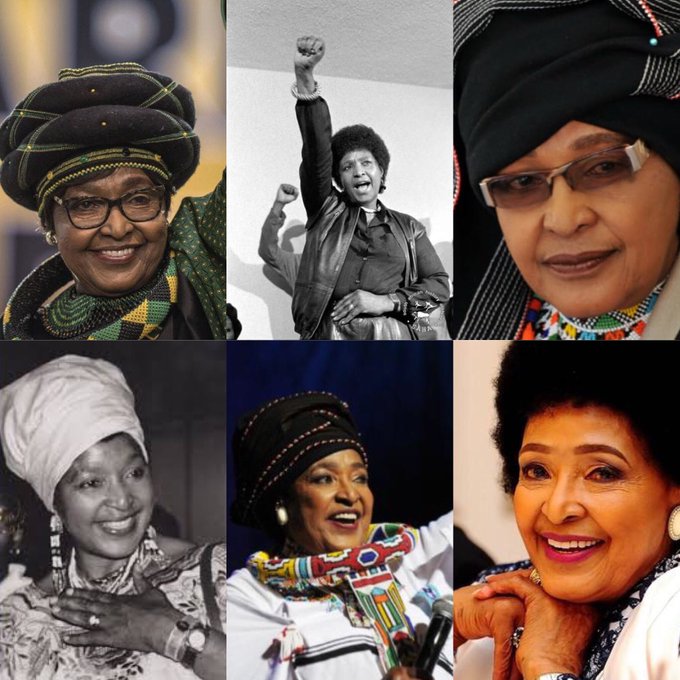 In the darkest hours of the struggle to free South Africa, with Nelson Mandela in prison, the face of hope and courage was #Winnie Mandela. May she forever rest in #Power.

2 thoughts on “WINNIE MANDELA: TEARS FOR A TYRANT”