Soros funded EUSSR apparatchik calls Marine Le Pen, Nigel Farage and more Eurosceptic politicians of being Kremlin-funded “fifth columnists” working to destroy Europe from within. He even claimed Brexit was a Russian plot. The EU Parliament’s Brexit chief has accused Marine Le Pen, Nigel Farage and more Eurosceptic politicians of being Kremlin-funded “fifth columnists” working to destroy Europe from within. He even claimed Brexit was a Russian plot.

While addressing the EU parliament in Strasbourg on Wednesday, Guy Verhofstadt, a Belgian MEP and lead Brexit negotiator for the bloc, singled out Britain’s Nigel Farage, France’s Marine Le Pen, and Dutch MP Geert Wilders as “fifth columnists” who “take Kremlin money and intelligence”. The staunchly pro-EU Belgian then warned about a “circle of evil around our continent” stretching from “[Russian President Vladimir] Putin, [Turkish President Recep Tayyip] Erdogan and, on a bad day, –and that’s every day at the moment– even [US President Donald] Trump”.

The name-calling escalated quickly as even Poland’s Jaroslaw Kaczynski –who can hardly be called a Putin fan, to put it mildly– made it to the ranks of “Russia’s men” in the EU. His pal, Hungary’s PM Viktor Orban, as well as Italy’s Deputy PM Matteo Salvini concluded the list of European right-wing politicians deemed traitorous by the bigwig. 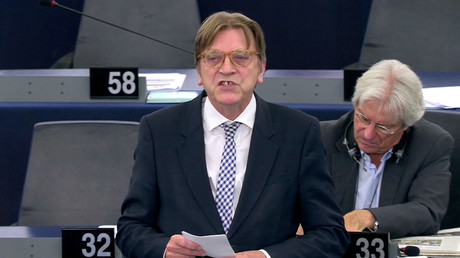 He then claimed that Arron Banks, a wealthy businessman and co-founder of Leave.EU, had “colluded” with nameless “Russians” to “deliver” Brexit, one of many remarkably vague accusations which he failed to clarify or support.

Responding to the inflammatory tweet, Farage shot back: “This is a baseless lie. I have never received any Russian financial or political support. I suggest you withdraw,” the British MEP and former UKIP leader wrote.

Responding to Verhofstadt’s remarks, UKIP MEP Ray Finch described the Belgian politician as a “federalist fanatic”who was just “lashing out.” According to the Independent, Finch said Verhofstadt is “incapable or unwilling to accept that the British people voted to leave the EU. Calling 17.4 million people ‘Putin’s puppets’ is so outlandish I fully expect him to blame it on the influence of singer Iggy Pop or the lunar cycle. He is an EU conspiracy theorist who deserves our pity. Funny he did not mention his great friend George Soros who has publicly pumped billions into political campaigning.”

Farage and Verhofstadt regularly take swipes at each other in the parliament’s chamber. After Verhofstadt was appointed as the EU parliament’s chief Brexit negotiator, Farage described the Belgian MEP as a “fanatic” and the “high priest” of the European Union.

“In fact, there is only one real nationalist in the room and it’s you [Mr Verhofstadt] – because you want flags, anthems, armies, you are an EU nationalist,” Farage told the parliament. “I frankly think that this appointment amounts to pretty much a declaration of war on any sensible negotiating process.”

One thought on “Verhofstadt Meltdown”