Death is the appropriate punishment for apostates but in Muslim-minority Australia there should be no public relations unfriendly “call” for the death of those who have abandoned Islam.

Australian ex-Muslims’ fears for their safety are totally unfounded:

Sydney scholar Sheikh Ahmed Abdo said: “You could easily pick and choose verses from the Koran and shape whatever narrative you want … if they’re not taken in a holistic manner.”

Okay, Sheikh. Here’s holistic for ya:

The Messenger of Allah said, “Whoever changes his (Islamic) religion, kill him.” Al-Bukhary (number 6922) He said apostasy carried a capital punishment in classical Islamic legal manuals, though added: “The punishment for apostasy is usually included in sections dealing with rebellion and political warfare.”

Sheikh Abdo is lying. Islamic scripture has no qualifiers for apostasy “in sections dealing with rebellion and political warfare.”

“People are free to choose to embrace Islam or leave Islam, just like they’re free to make choices in how they live their lives.”

He added: “No-one should be calling to kill an apostate in lands where Islamic law is not applied.”

Sleeping infidel dogs could wake up & smell the coffee. Not good for the ‘image’ of Islam.

And so it is that death is the appropriate punishment for apostates but in Muslim-minority Australia there should be no public relations unfriendly “call” for the death of those who have abandoned Islam. So kill them quietly for the sake of Allah.

Mauritania makes death penalty for leaving Islam mandatory: “We want to be as close to the real Sharia as possible”

Islamic apologists in the West routinely insist that Islam has no death penalty for apostasy, but as always, reality is otherwise. The death penalty for apostasy is part of Islamic law. It’s based on the Qur’an: “They wish you would disbelieve as they disbelieved so you would be alike. So do not take from among them allies until they emigrate for the cause of Allah. But if they turn away, then seize them and kill them wherever you find them and take not from among them any ally or helper.” (Qur’an 4:89) 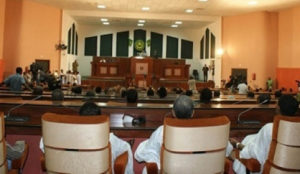 NOUAKCHOTT, Mauritania – On 27 April 2018, The National Assembly of Mauritania passed a law that makes the death penalty mandatory for anyone convicted of “blasphemous speech” and acts deemed “sacrilegious.”

Human rights experts from the UN, the African Commission of Human and People’s Rights (ACHPR), and more than 20 NGOs have called upon the government of Mauritania to review and rescind Article 306 of the Criminal Code that carries the mandatory death sentence for people convicted of blasphemous speech or any acted deemed to be sacrilegious.

Prior to 27 April, the law permitted three days during which convicted defendants were allowed to repent. It appears that the revision to the Code was engendered by the high-profile case of a Mauritanian blogger, Mohamed Cheikh Ould Mkhaïtir. Mkhaïtir, a member of the blacksmith caste, had posted a blog in “denouncing the use of religion to legitimize discriminatory practices” against his caste.

That was in 2014. Although his sentence was commuted to two years in prison, as of this article, he has not been released. His successful appeal, however, outraged the conservative Muslims in a country that seems bent on bringing its national laws into agreement with Sharia. Several months ago, prosecutors sought to reopen the case and to reinstate the death sentence….

The Minister of Defense defended the need for Article 306, saying that “what we had before was in contradiction with official Sharia code, the official law. We want to be as close to the real Sharia law as possible, so we needed to eliminate that discrepancy between the two.”

Article 306 is subtly aimed at Muslim apostasy and blasphemy. Technically, they become apostate if they convert to Christianity. Conversion becomes the legal grounds for imposing the death penalty….