Calling for genocide of Jews is basic Islam 101.  Genocidal Jew-hatred is in their DNA . Mohammedans suck the hatred in with the mothers milk.

He promptly turns it around and blames the kuffars for doing him wrong:

Imagine how embarrassed the Danish authorities will be when they discover that Mundhir Abdallah was not quoting some “extremist” text.

“Abu Huraira reported Allah’s Messenger (may peace be upon him) as saying: The last hour would not come unless the Muslims will fight against the Jews and the Muslims would kill them until the Jews would hide themselves behind a stone or a tree and a stone or a tree would say: Muslim, or the servant of Allah, there is a Jew behind me; come and kill him; but the tree Gharqad would not say, for it is the tree of the Jews.” (Sahih Muslim 6985)

This is a canonical hadith from a collection that Muslims consider reliable. It would be more surprising if Mundhir Abdallah repudiated it. The ignorance of Western authorities regarding Islamic texts and teachings, and their false assumptions about what they contain, is leading the West to disaster.

STOCKHOLM (AFP) – Danish prosecutors on Tuesday charged an imam with calling for the killing of Jews in the first case of its kind in the Nordic nation and which sparked political outrage.

Imam Mundhir Abdallah, who preaches in the Copenhagen neighbourhood of Norrebro at the Masjid Al-Faruq mosque, which media have linked to radical Islam, is accused of citing a hadith or koranic narrative calling for Muslims to rise up against Jews.

“These are serious statements and I think it’s right for the court to now have an opportunity to assess the case,” public prosecutor Eva Ronne said in a statement.

This is the first time the prosecution has raised such charges under a criminal code introduced January 1 2017 on religious preaching.

Ronne said it’s legal to quote religious books like the Koran and the Bible, but that inciting or welcoming the killings of people could be punishable by up to three years in prison…. 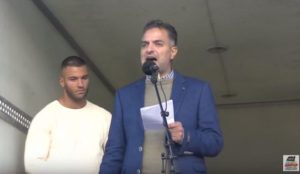 (Photo: Copenhagen based imam Mundhir Abdallah. He claims that “if you press Islam, it will hit back. If you let it alone, it will spread.”)

An update on this story.

Copenhagen-based imam Mundhir Abdallah is the first to be indicted for breaking Denmark’s new so-called imam law. The Danish police claim that Mundhir Abdallah has called for the killing of Jews by quoting a famous statement by Islam’s holyest prophet, Mohammad. According to police, Abdullah said:

“The Day of Judgement will not come about until Muslims fight the Jews so that the Muslims kill them, and the Jew will hide behind stones and trees. The stones and trees will say O Muslims, O Abdullah, there is a Jew behind me, come and kill him.” The quote is from the Islamic hadith by Sahih Muslim, 041:6985.

“These are heinous statements, and I think it is quite right that the court now has an opportunity to assess the case,” says Advocate General Eva Rønne from the State Prosecutor’s office.

According to the new Danish law, it is legal to quote religious texts calling for violence, as long as the person quoting it does make it clear that it is not his own opinion. The prosecutor is convinced that Mundhir Abdallah did not make this distinction clear.

Mundhir Abdallah is not happy about the indictment:

“Even 10 years in prison will not scare us Muslims. We are proud of our faith. The indictment criminalizes Islam and Islamic texts. Authorities want us to only tolerate Danish values. They want us to assimilate, but that will never happen,” said Adballah.

One thought on “Denmark: Imam charged with hate speech for quoting Muhammad calling for killing Jews”