Finally, someone on French TV managed to say what is obviously, and historically, true.

.
All of Europe is currently Dar al-Harb, and it will not become Dar al-Islam until Sharia Law is implemented and the people of Europe pay the jizya, the religious tax on unbelievers. This is Islam’s true nature.

Céline Pina, an ex-member of France’s Socialist Party (PS), is interviewed on French national television in a TV show hosted by David Pujadas.

Reacting to the increasing number of street prayers in France she says:

“There is clearly a form of takeover, and the third message is to show that the faith is superior to the law and that the determination of the faithful allows them at the same time to occupy the public space and it is limitless, since the public authority, the politicians, don’t put an end to it, even if it’s completely illegal,” she adds.

Thanks to Vlad Tepes for the video & the subtitles.
,
In other news:

The following article by contributor Josiane Filio of Riposte Laïque denounces the cover-up by the French government of its own failure to prevent the November 13, 2015 Bataclan massacre or, at the very least, to reduce the number of deaths by allowing the security forces to do their job properly
.
In related news:
.
France arrests a bunch of people it accuses of being “far right” for planned attacks on “radical mosques and prison converts” Check out who they arrested. These people shjould be given medals and assistance. Not a criminal record.
.

Following the arrest of ten far-right militants in France earlier this week, new information has been released about the extremists including a claim that one member of the group had lost a daughter in the 2015 Bataclan terror attack.

Since the arrests, several claims have been made about the group, known as Action des Forces Opérationnelles (AFO), including several of the names of members including leader Guy S., a 65-year-old former police officer, and two other men named Dominique C., who is said to have lost his daughter in the Bataclan massacre, and Marie-Dominique R., Sud Ouest reports.

On a website associated with the AFO, the group denied any involvement of plotting attacks saying: “Everything is false in these accusations against our comrades. Our movement does not advocate violent attacks or provocations under any circumstances, which are counterproductive.”

One of the biggest stories coming out of France these past few days has been the scheduled appearance of Islamist rapper Médine (above) …   GALLIAWATCH.BLOGSPOT.COM Fears raised over policy agreed by EU leaders in Brussels

END_OF_DOCUMENT_TOKEN_TO_BE_REPLACED 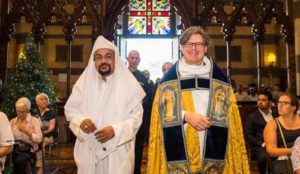 END_OF_DOCUMENT_TOKEN_TO_BE_REPLACED

The family of a Logan man who was charged with terrorism offences after an early morning raid are “devastated”, a leading Islamic community member says.

Ali Kadri says the charges should not be seen as a reflection on the broader Muslim community
.
Translation: Ali Kadri doesn’t want infidel dogs to wake up & get wise about Islamic terror. Go back to sleep, kaffirs!

The charges include five counts of preparing incursions into foreign countries for the purposes of engaging in hostile activities in late 2016 and early 2017, and recruiting juveniles to join him.

END_OF_DOCUMENT_TOKEN_TO_BE_REPLACED

In once great Britain the fox is guarding the chicken coop. A sly Mohammedan, Sajid Javid, heads the Home Office, and like all good deceivers he tells us that “the threat doesn’t only come from Daesh.

“Extreme right-wing terrorism is also an increasing threat… Daesh and the extreme right wing are more similar than they might like to think.

“They both exploit grievances, distort the truth, and undermine the values that hold us together.”

Sajid Javid knows very well that there are no “values that hold us together”.  Islam has nothing to share with the kafiroon, they must be eliminated.

Why Britain’s Deradicalization Programs Are Failing

A blast from the (not so distant past)

Sadiq Khan, Lawyer For Islamic Terrorists, before complete and utter Moonbats made him the mayor of Londonistan:

END_OF_DOCUMENT_TOKEN_TO_BE_REPLACED

More than 200 killed as herders, farmers clash in central Nigeria

They are Africans and mostly Christians, so of little interest to the media:

Over 200 people, most of them believed to be Christians, were massacred over three days in Nigeria this past weekend, officials and church sources are saying, as the relentless bloodshed carried out by radicals continues.

The Christian Association of Nigeria said on Wednesday that the current death toll in the country’s Middle Belt, based on attacks that began last Thursday and continued until Sunday, stands at 218….

The killings are a result of clashes between the radical Muslim Fulani herdsmen and local area farmers near the city of Jos, many of whom are Christians, though officials have not yet identified how many of the victims belong to each group.

Organizations representing the Fulani have denied that they are responsible for the attacks, AFP reported, though police say that the cattle-herders are indeed to blame.

Plateau State Governor Simon Lalong revealed that “sophisticated weapons” were used in the latest attacks on farmlands, which he said were “reflective of a terrorist invasion.”