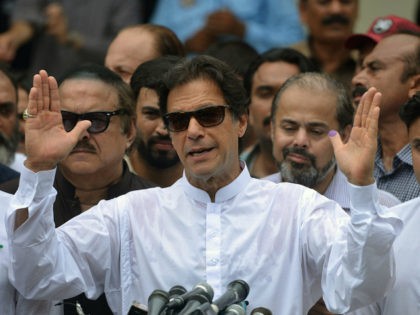 “Today in front of you, in front of the people of Pakistan, I pledge I will run Pakistan in such a way as it has never before been run,” he said.

On Friday, officials announced that Khan’s Pakistan Tehreek-e-Insaf (PTI) party had won 114 of the 269 seats being contested in the National Assembly.

Open Doors, which monitors Christian persecution around the world, said that everything suggests that Khan will be no friend to religious freedom, noting that “he seems keen to ensure that Pakistan remains a strongly Islamic republic.”

Many Christians fear Imran Khan as the country’s leader as he has said he wants to return to jirga, a traditional assembly of leaders that make decisions by consensus and according to the teachings of Pashtunwali – a series of non-written ethical codes which predate modern laws and which prove a dangerous mix in combination with Sharia, the strict Islamic law.

Khan has voiced support for Pakistan’s blasphemy laws, saying he understands that the laws are an “inconvenience” for some people. “But it is a law that is complete and I support it,” he reportedly said.

Pakistan has some of the most severe blasphemy laws in the world, prescribing the death penalty for the crime of insulting the Prophet Muhammad and life imprisonment for offending the ‎Koran, Islam holy book.

The blasphemy laws are an extremely sensitive issue in ‎the predominantly Muslim nation where Christians make up less than two percent of the population.

In June, Pakistani Christian Asia Bibi completed her ninth year of imprisonment for her faith after being arrested for blasphemy in 2009 and sentenced to death by hanging in 2010.

Pakistani police arrested Bibi on charges of blasphemy after Muslim women backed up by an Imam complained that she had insulted the prophet Muhammad.

Bibi had been harvesting berries in a field with a group of Muslim women who grew angry with her for drinking out of the same metal water bowl as them, insisting that as a Christian she was unclean.

“The United States has foolishly given Pakistan more than 33 billion dollars in aid over the last 15 years, and they have given us nothing but lies & deceit, thinking of our leaders as fools. They give safe haven to the terrorists we hunt in Afghanistan, with little help. No more!” he tweeted on New Year’s Day.

Not long after, the U.S. State Department announced it would add Pakistan to its Special Watch List as a “Country of Particular Concern” for severe religious freedom violations, citing the egregious abuse of Christians, Hindus, Ahmadi Muslims, and other minorities in the country.

Pakistan was placed on the List for “severe violations,” suggesting evidence that religious minorities are significantly more threatened in that country.

Pakistan is an Islamic republic whose constitution requires all laws to be in conformity with the Sharia, or Islamic law.

The nation’s penal code prohibits Ahmadi Muslims from identifying as Muslim and using Islamic greetings, as well as banning the “defiling” of the Quran and words that can be interpreted as “blasphemy” against Islam.

While votes are still being tallied in some areas, Khan’s centrist Tehreek-e-Insaf (Movement for Justice) have won 115 seats so far, becoming the largest party in the National Assembly.

Khan, who ran as a populist reforming candidate, has publicly supported laws imposing strict penalties for blasphemy against Islam – including desecrating a Quran or insulting Mohammed. Penalties for insulting Islam’s chief prophet include fines, prison, and even the death penalty.

While no one has been formally executed for the crime in Pakistan, mob violence and killings have accompanied public accusations of blasphemy. This includes the assassination of Salmaan Taseer, the Muslim governor of the Punjab province and a critic of the blasphemy laws, and Shahbaz Bhatti, a Catholic and Pakistan’s only Christian cabinet member. Bhatti’s cause for beatification was opened by the Diocese of Islamabad-Rawalpindi in 2016.

In his 2011 autobiography, Khan spoke out against a lack of government action against religious leaders who used the issue of blasphemy “arguably [to] incite murder.”

Coming just weeks before the election, his public backing for the controversial laws was seen by many observers as a concession to hardliners in the country ahead of the vote.

Parties running on an explicitly anti-blasphemy platform did poorly at the polls, with Tehreek-e-Labaik Pakistan, which campaigns under the rallying cry “Death to Blasphemers” failing to win a single seat, despite a garnering a large following in the province of Punjab.

As CNA has previous reported, accusations of blasphemy are disproportionately leveled against religious minorities, and the laws are seen as a vehicle for religious intolerance or persecution.  While Pakistan is 97 percent Muslim, 14 percent of blasphemy cases are brought against non-Muslims.

Cardinal Joseph Coutts, Archbishop of Karachi, has spoken about the religious climate in Pakistan, which he says is getting more dangerous for Christians. In an interview with CNA in June, he raised the risks increasing posed by radicalization and foreign influences.

While saying that the majority of Pakistani Muslims are moderate and support democracy, he noted that some extremists do not.

There’s no such thing as a “moderate Muslim”.

“[They] don’t accept democracy, they don’t accept the international declaration of human rights, they say it’s not Islamic.”

Of course not. Islam is replacement theology.

While saying that Islamic hard-liners are a small minority, Coutts cautioned that they are now becoming a more prominent force in the life of the country.

Coutts is delusional. Islamic hard-liners are  not a small minority. They are the overwhelming majority.

“We’ve always had these kinds of people on the fringes, but they weren’t dominant,” he added. “Now they are becoming more assertive.”

While he will need to form a coalition to formally take power, Khan is widely expected to become Prime Minister. He has pledged to create 10 million new jobs in five years and promised in his acceptance speech to prioritize the rule of law and end institutional discrimination.

“We will not do any kind of political victimizing. We will establish the supremacy of the law; whoever violates the law, we will act against them.

“We will set an example of how the law is the same for everyone. If the West is ahead of us today, it is because their laws are not discriminatory; this will be our biggest guiding principle.”

Although pledging to end corruption, the victory comes with allegations of vote-rigging. Every party apart from Khan’s Movement for Justice have complained about the way the vote was conducted. European Union observers characterized the campaign as having a “lack of equality” among the parties.

Despite this, the second largest party, the Pakistan Muslim League-Nawaz (PML-N), has accepted the result. Hamza Shahbaz Sharif, a senior party official said that despite “reservations” over the way the election was held, they were accepting the result to “strengthen democracy in the country”.

There will never be ‘democracy’ in Pakistan. It will always be a s#*thole country run by Islamic despots.

2 thoughts on “Spain, France, Germany: all going down fast”