A quote from Stefan Molyneux on Friday night opens a few doors:

“Do not use the conscience of good people to strip from them everything that they have.”

He was pointing out the injustice of blaming living white people for supposed crimes of the past which they did not commit. The reason this is done to us is because we are good people. We have empathy for the outsider in our DNA, and in the universalist thought which has dominated Western intellectual institutions for the last few centuries.

They would be quite happy to keep kicking us for change until we are done in.  It is Marxism in its purest form. But noody bothers the Arabs about their slave trade which murdered an estimated 200 million people. Because they know it won’t do them any good. The Arabs aren’t sorry. They are proud of their mythical Golden Age. And they sure as hell won’t be shamed out of their money.

I say, ditch the guilt. Stop funding the diversity industry and the guilt trip university courses, close the holocaust museums, boycott Hollywood which make every movie a morality play about slavery, and end all welfare.

Make people work for a buck.

The way they try to instill guilt is offensively stupid, but effective: 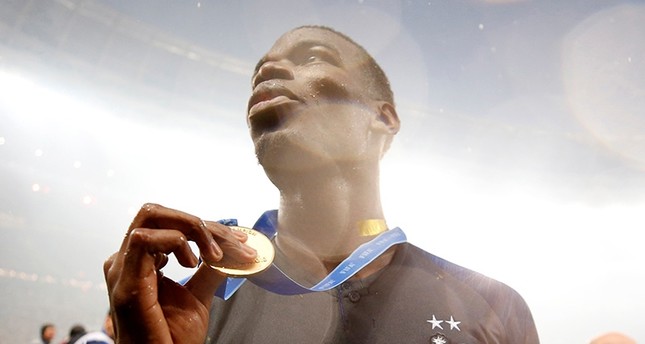 As France clinched its second-ever World Cup win over Croatia thanks to goals by migrants and a Muslim, fans and onlookers quickly pointed out the need for the country to apply its victories on the field to life off the field.

Often in the spotlight for its xenophobic and Islamophobic social policies, France didn’t seem to mind when it came to good footballers, stocking 78.3 percent of its team with immigrants, a third of whom are Muslim. That was the highest percentage among any qualifying team in this year’s World Cup. Immigrants make up 6.8 of France’s overall population.

Of the four goals France scored against Croatia, two were scored by the sons of African immigrants – Paul Pogba, whose parents immigrated from Guinea, and Kylian Mbappe whose mother is Algerian and father is Cameroonian.

Pogba is a practicing Muslim, along with six of his teammates including starting midfielder N’Golo Kante.

Only a third of the World Cup champion team has white-European ancestry, and less than a quarter have French ancestry.

Football fans quickly took to Twitter on Sunday evening to call on France to put an end to its “hypocrisy” and acknowledge the foundational, positive role immigrants and Muslims play in developing its society.

“With France passing all these laws against Islamic practices, let’s not forget it’s these same Muslims players who helped win #WorldCup2018,” one Twitter user wrote.

Other Twitter users called France’s hypocritical policies against migrants and Muslims “shameful” in the light of their celebrated win.

Some called on France to recognize the victory as a much-needed wake-up call for the country to adopt policies upholding the rights and dignity of migrants and Muslims.

Others tweeted phrases including “Immigration makes France stronger,” and “Immigrants get the job done.”

France’s win on Sunday was its first in 20 years, after winning on its home turf in 1998. It was the highest-scoring final since England beat West Germany 4-2 after extra-time in 1966 and the highest in normal time since Brazil beat Sweden 5-2 60 years ago.

One thought on “Thought for the Day: Why blacks don’t blame Arabs for slavery”