WILL WALLY TELL A JOKE ABOUT THIS CARJACKING, TOO?

Aly joked that he had also started to get “concerned” about African gangs, “mainly because I am of African heritage. If there really are a bunch of African gangs, frankly I am offended to not have at least been joined to join one”.

On the ABC, Jon Faine cried over the coverage and Virginia Trioli laughed at it.

The woman was driving a Volkswagen Golf along Harrington Drive at Narre Warren South about 9pm when three youths in a car bumped her vehicle from behind.

“They’ve come out the car with a pistol and basically assaulted her and took the keys from my mum,” her son Jag told 3AW this morning.

The group threatened his mum and assaulted her to get her to give up the keys to the car, which she struggled to do because she was in shock.

“They’ve hit her with what we believe is a pistol or a gun in the face and then pushed her around trying to get the keys off her,” Jag said.

The group then took off in the distinctive car.

“She’s obviously shaken up, we’re taking her back to the doctors this morning … there’s a bit of paranoia there … there’s a lot of bruising and swelling,” her son said…

The offenders were of African descent …

No mention of this on the Victoria Police media site. No mention there, either, of the theft by Africans of a car in Camberwell a couple of days ago, during which the owner confronted the offenders. The thieves arrived in a Mercedes, almost certainly stolen as well, which they then abandoned.

Time for another joke from Waleed. Maybe he should have invited the mum to come in and join the laughter.

A mother who had a gun pressed to her head before being pistol-whipped in the face in a terrifying carjacking thought she was “going to die now”.

One thing’s for sure: this young woman has more courage than the whole Australian police “force”. Killers and sex offenders kicked out in Dutton blitz

FOUR killers and 28 paedophiles were among 167 foreign-born criminals living in Victoria who had their visas scrapped in the past year.

The cancellations were part of Home Affairs Minister Peter Dutton’s ongoing blitz to rid the nation of such offenders.

Another 36 criminals who committed violent crimes have lost their visas and 10 perverts with convictions for rape and other sex offences will also be kicked out of Australia.

Julie Bishop: Today, at the Global Disability Summit in London we are pleased to announce the Australian Government will provide $16.4 million to address the needs of people with disabilities affected by the conflict in Syria.

You couldn’t make this shit up . It just beggars belief. This stick insect just throwing borrowed money around again to countries that hate us. WHAT ABOUT OUR OWN STRUGGLING FARMERS.

Not for the first time:
.

We won’t miss him: Sydney-based leader of Islamist group who called for Sharia law in Australia is detained in the Middle East with his wife 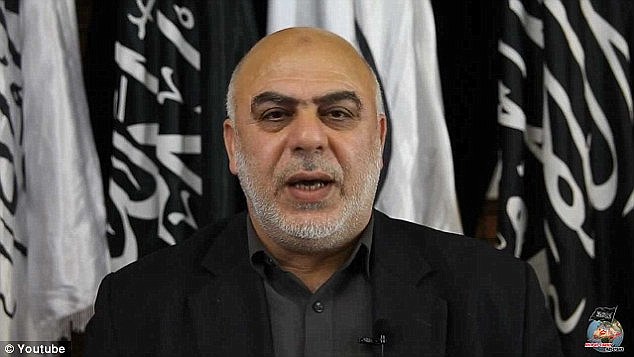 Former Sydney taxi driver Ismail al-Wahwah, the spiritual leader of Hizb ut-Tahrir in Australia, was detained at Amman Airport on Wednesday while travelling to the Arab nation with his wife

The Sydney-based leader of an Islamist group campaigning for Sharia law has been detained in Jordan.

Ismail al-Wahwah, a former taxi driver who is now the spiritual leader of Hizb ut-Tahrir in Australia, was detained at Amman Airport on Wednesday while travelling to the Arab nation in the Middle East with his wife.

Hizb ut-Tahrir Australia announced the Condell Park man, from south-west Sydney, was arrested upon arrival in the country and taken into custody by Jordan’s General Intelligence Directorate without access to a lawyer.

‘It is unclear at this stage as to the basis of his detainment, but sources close to the family indicate he is likely to be formally charged and/or prosecuted over the coming days,’ the Islamist group said in a statement.

His family will be seeking Australian consular assistance in Jordan and Australia.

‘We pray Allah protects the health and well being of Ismail Alwahwah and secures his immediate release,’ Hizb ut-Tahrir said.

‘We ask you to extend a sincere prayer in his support too inshaAllah.’

Daily Mail Australia has sought confirmation from the Department of Foreign Affairs and Trade.

The Islamist preacher, known in the Muslim community as Abu Anas al-Wahwah, has previously been deported from Indonesia and travelled to Syria in 2013 in support of an Islamic caliphate.

His arrest this week occurred two years after he told a ‘caliphate conference’ at Ankara in Turkey that Muslims needed to lead’the armies of jihad that will conquer Europe and America’ where their enemies have ‘black hearts’.

In his speech, al-Wahwah also warned attendants not to trust their ‘enemies’ in America, Europe and North Atlantic Treaty Organisation.

Hizb ut-Tahrir has been linked to the 2015 shooting in Parramatta of accountant Curtis Cheng, following revelations it radicalised 15-year-old who shot the father-of-two dead.

In his speech, al-Wahwah also warned attendants not to trust their ‘enemies’ in America, Europe and NATO

Farhad Jabar Khalil Mohammad reportedly listened to a talk by Hizb ut-Tahrir at Parramatta mosque in Sydney’s west and changed into a black robe before he headed to the nearby New South Wales Police headquarters and shot Mr Cheng in the back of the head in September 2015.

One thought on “Why are we throwing money at people who hate us?”