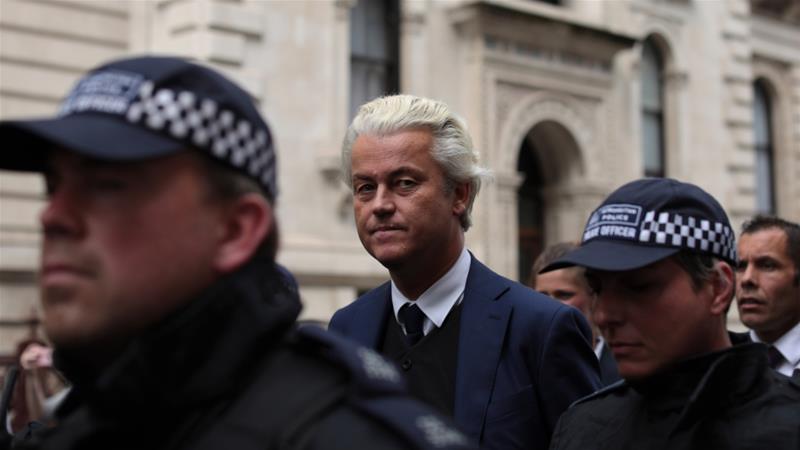 The scheduled contest sparked angry protests in Pakistan and a death threat this week from a 26-year-old man, reportedly a Pakistani, who was arrested on Tuesday in The Hague.

Earlier on Thursday, a Dutch judge extended by two weeks the detention of the man who allegedly threatened to attack Wilders.

Prosecutors said in a statement that an investigating judge ordered the suspect held while he is investigated on charges of making a threat, making preparations for a murder and incitement.

Stijn van Kessel, a political scientist at Queen Mary University of London, told Al Jazeera that the competition was a tactic by Wilders to get media attention in the face of waning public support.

“He is not truly interested in a cartoon contest but this is a way for him to generate media attention; he hopes that will eventually translate to votes,” Kessel said.

Stijn van Kessel is a traitor and a yellow bellied coward.

Physical depictions of the prophet are forbidden in Islam and deeply offensive to Muslims.

But not to us. We are not Muslims. We reject their abhorrent belief-system.

In Pakistan, thousands of people angered over Wilders’ plans marched towards the capital, Islamabad, on Thursday.

About 10,000 supporters of the Tehreek-i-Labaik Pakistan party set out on the march on Wednesday, calling on the government to cut diplomatic ties with the Netherlands.

Pakistan’s government had vowed to protest the contest at the United Nations.

The Dutch government has distanced itself from the competition, with Prime Minister Mark Rutte clarifying that Wilders, leader of the opposition Freedom Party, is not a member of the government.

Wilders announced the contest in June and claimed to had received 200 entries so far. The winner was supposed to receive a cash prize.