The Daily Mail, as I have noted more than once, is the worst paper in the Western world: it covers jihad violence more accurately than most, but then demonizes — “ruthlessly,” to use the Daily Mail’s own word — anyone and everyone who actually opposes jihad mass murder and Sharia oppression. This piece is an especially egregious example. Five people have been killed, and the focus is not on the fact that they were murdered by Muslim migrants, and on the implications of that fact, but on the “far right” is “ruthlessly” using the killings to “stoke up hatred.” Were the killers themselves stoking up hatred? Oh, no. Only those who are “using” the killings are, you see.

Any opposition to mass Muslim migration, you see, is “hatred.” There cannot possibly be any legitimate concerns about bringing in large numbers of people among whom will inevitably be some who have nothing but contempt for the host culture and a determination ultimately to replace it with Sharia. There cannot possibly be any legitimate concern for the skyrocketing rape rates, and other crime rates. Anyone who dissents, and who demonstrated in Chemnitz, is “Far-Right”, a neo-Nazi, to be put down by “Left-wing anti-Nazis.”

Are there Nazis in Chemnitz? Possibly. Are there also Leftists making Hitler salutes in order to discredit the foes of mass migration and Islamization? Almost certainly. If there are actual Nazis around, would that fact discredit utterly the concerns of the “ordinary citizens” who have “also been marching”? Do the “ordinary citizens” have genuine concerns that don’t deserve to be demonized and dismissed as “far-right” and “neo-Nazi”? Of course. But you won’t hear about that in the Daily Mail.

Daniel Hillig never stood a chance when he was killed in the early hours of last Sunday morning. As he took out money from a bank machine, a man ordered him to hand over his cash and credit card.

He tried to run, but was stabbed five times, leaving him dying on the pavement near a Karl Marx statue overlooking the city centre of Chemnitz in eastern Germany.

I was given this account of his death by someone who heard it first hand from those who were with Daniel that night. Indeed, this week I was taken by this friend of Daniel Hillig to the cash machine, a few yards from the shrine set up where he fell.

The 35-year-old German carpenter’s death has sparked riots and demonstrations over the divisive issue of mass migration into Europe after it emerged the prime suspect was an Iraqi Kurd who arrived in Germany three years ago.

In front of the Karl Marx statue, fascist protesters in dubious regalia have raised straight arms in grotesque Nazi salutes — banned in Germany since the defeat of Hitler in 1945 — while calling for the country’s Chancellor Angela Merkel to quit.

Protests on the streets of Chemnitz following a fatal stabbing 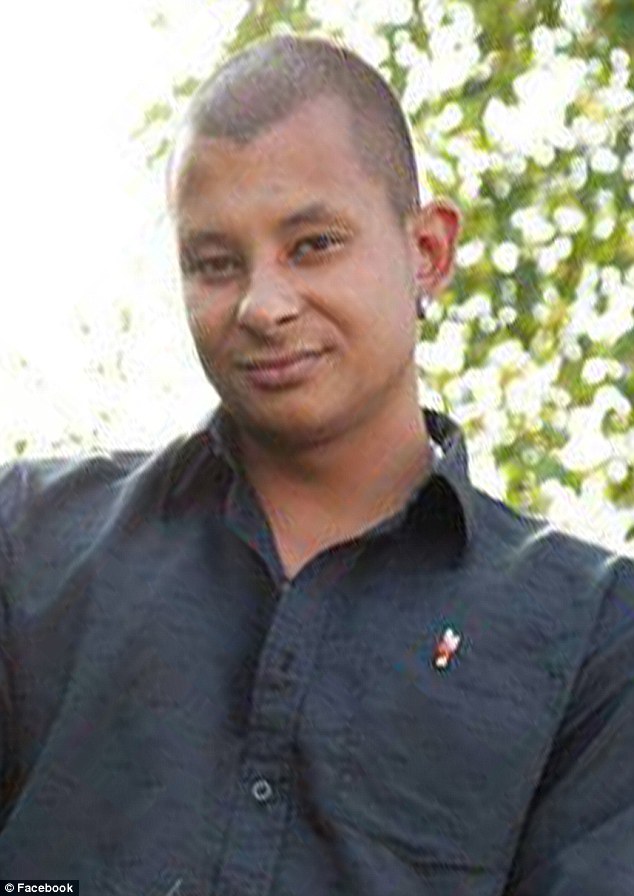 Daniel Hillig, 35, a married carpenter from Chemnitz, who was fatally injured at around 3am on Monday morning

Left-wing anti-Nazis have retaliated with violence as police with tear gas struggled to keep the two sides apart. Significantly, also marching on the streets have been ordinary citizens of this city, where almost one in four voted for a rising Right-wing anti-immigration party, Alternative for Germany (AfD), in recent elections.

Three summers ago, Merkel invited Syrians embroiled in a civil war to come to Germany.

More than one million migrants arrived in a matter of months, their nationalities and the true purpose of their journeys largely unchecked, from a myriad countries across the impoverished and war-torn Third World.

One of them, it now transpires, was named Yousif, and is the 22-year-old Iraqi Kurd who is being investigated over the knife attack on Daniel Hillig, a German of Cuban extraction. 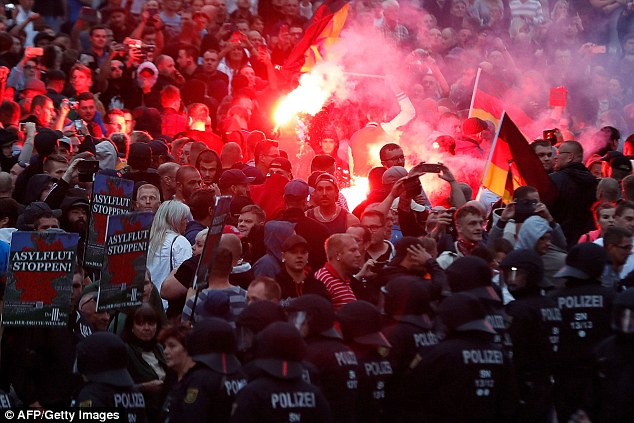 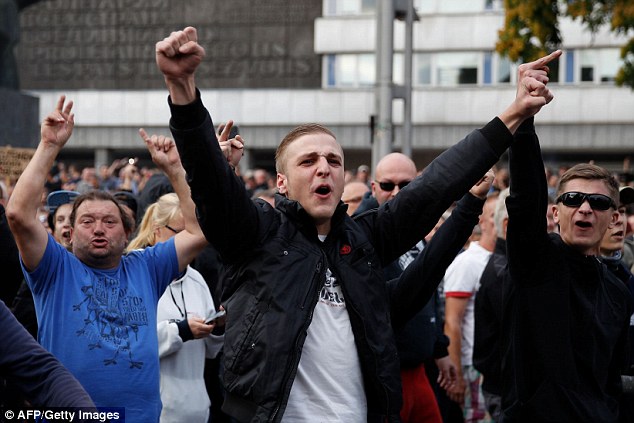 People demonstrate on August 27, 2018 in Chemnitz, eastern Germany, following the death of a 35-year-old German national

Yousif was living in an asylum hostel 20 miles from Chemnitz and had travelled in to town to enjoy a street festival with a migrant friend, a 23-year-old Syrian named Alaa. Both are now in custody and being questioned by police.

News that migrants were implicated in the death instantly raised hackles in this racially fraught part of Germany.

As Utte — a 61-year-old who works at the local Ikea store — told me this week at the shrine of candles for Daniel in central Chemnitz: ‘I have a son aged 33 who is half-Mozambican. ‘I have a grand-daughter who is half-Indian and half-German.

‘I have always welcomed migrants here, and I know there is terrible racism in this eastern part of Germany because my own family have suffered it. My granddaughter is shouted at on the bus for having dark skin. My son is turned away at nightclubs because he looks a different colour to a “thoroughbred” German.

‘But we believe foreigners tried to rob Daniel Hillig at the bank and then knifed him. I have to feel anger about that and feel sad for the future of Germany.’

Beside her, a young Afghan man of 21, who is a migrant himself, added: ‘I knew Daniel, too. He had a girlfriend, Bianca, who I was in touch with. I am here because I am sorry about what happened.

‘I dare not give you my name for printing because the backlash against people like me is going to get worse in Chemnitz even among those who first welcomed us a few years ago.’

This week, information from a police document emerged about Yousif and his past. A justice official in Dresden admitted to the respected German newspaper Bild on Thursday that he had leaked the arrest warrant after photographing it.

It’s now known that after his arrival in Germany in the migration wave of 2015, Yousif became a hairdresser and had passed a language test set for asylum seekers. There is even a photograph on his Facebook page of him standing proudly, apparently during a holiday, in front of the Eiffel Tower in Paris holding up a Kurdish flag. 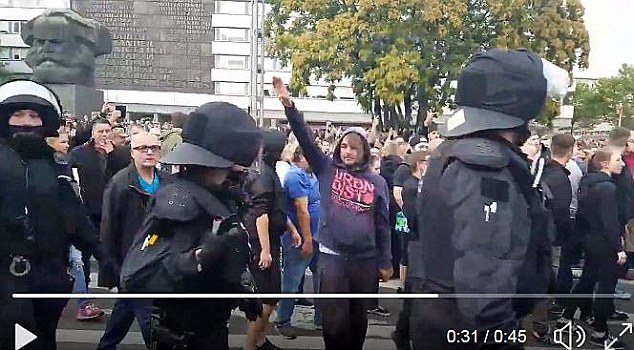 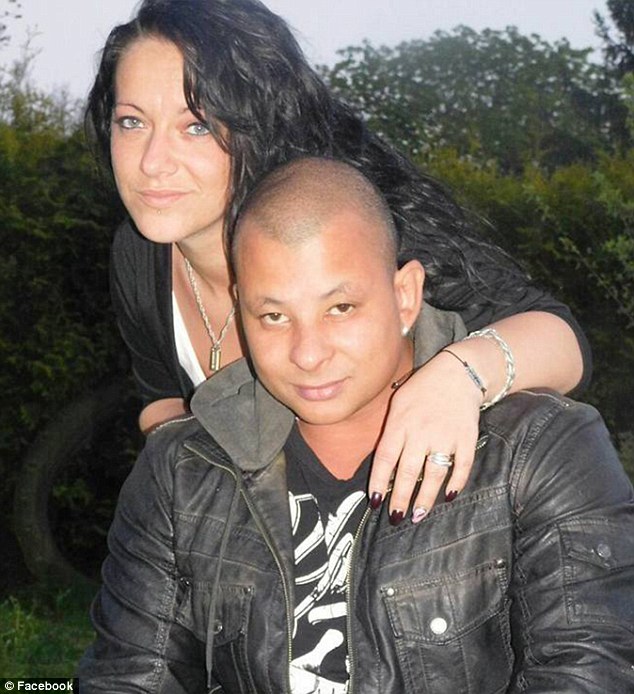 An Iraqi man, aged 22, and a Syrian man, aged 23, were arrested on suspicion of murder following the attack on married Mr Hillig

Yet there is a darker side. According to the leak, he has a string of convictions for crimes committed as an asylum seeker. They include serious bodily harm, smuggling drugs into Germany, using pepper spray as a weapon in a migrant hostel, a violent street attack, property damage and fraud.

In March last year he was listed for deportation back to Iraq, but nothing happened. As Bild commented this week: ‘Many German people will say he should have been deported the moment he arrived in 2015. He comes from Kurdish Iraq and that is, anyway, considered a safe place to live.’

At the hostel where he lived, fellow migrants told reporters this week that Yousif often took drugs, particularly cannabis, and liked alcohol. Sometimes his behaviour was erratic. ‘He always had a knife because he had a lot of money. He said it was for self-defence on the street,’ explained one. 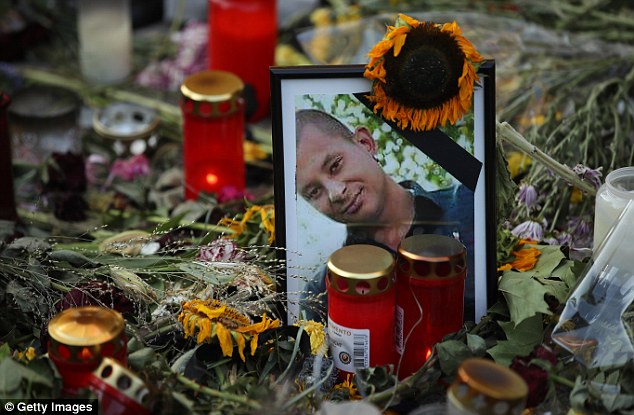 The hostel pals say that last Saturday Yousif kept calling them from the festival on his mobile phone to say: ‘You must come. We are having a lot of fun.’ But when he did not return on the Sunday — Daniel Hallig was killed before dawn that morning — they began to think something was wrong.

Indeed, something was. Those who have spoken to a witness to the knifing say that when Daniel ran from the bank machine, refusing to hand over his card or money, there was a flurry of activity.

They say the man who accosted him had made a call on his mobile, after which a group of men came around the corner and helped chase down the carpenter.

Now there is febrile talk on the streets of Chemnitz that others in Yousif’s circle played a part in Daniel’s death — and that does not bode well for Mrs Merkel’s migrants here in Saxony.

While the exact circumstances of this murder will be tested in court, there is no doubt the threat of violence against other immigrants has increased substantially.

Some have been chased through the streets and attacked in recent days. The mood I witnessed this week is ugly — and it may yet get worse.

Disturbances continued in the city on Thursday night when protesters waved banners and shouted that Chemnitz had become an ‘African enclave’.

They had been warned by organisers Pro Chemnitz — a nationalist group with 18,000 followers — not to give Nazi salutes to avoid pictures being taken of the abhorrent gesture and shown around the world.

One thought on “Daily Mail: any opposition to Muslim migration is “hatred””