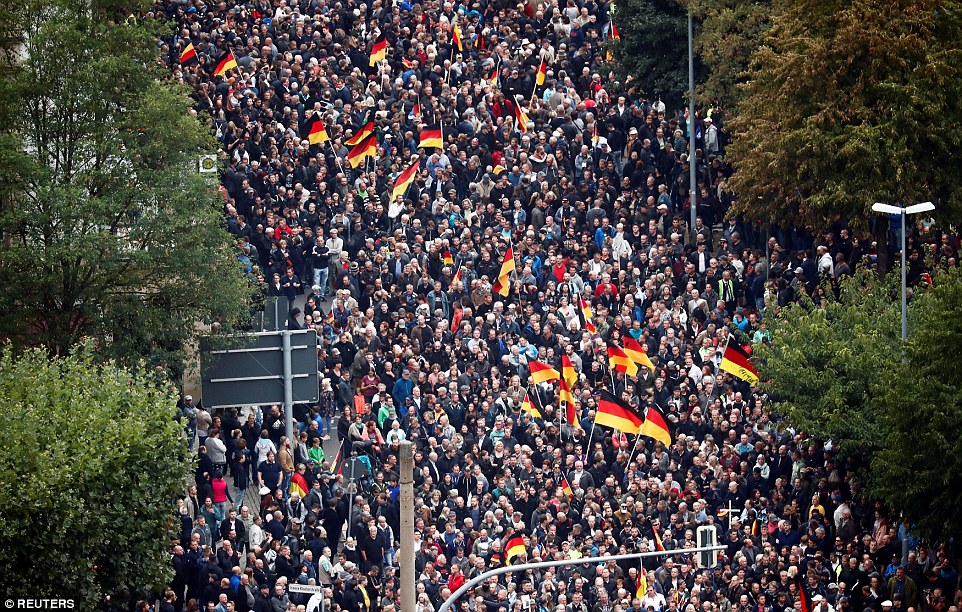 The Islamic Community Center of Redlands and its Peace Academy are hosting a multi-faith panel discussion, “The Legacy of Prophet Abraham,” on Sept. 11 to promote understanding and harmony. …

Right-wing protesters and opponents of Angela Merkel‘s liberal immigration policy have staged a fresh rally in Germany today six days after a German man was allegedly stabbed to death by two migrants.

Thousands of marchers waving German flags took to the streets on Saturday while leftists started a rival protest and more than 1,200 police officers kept watch in the city of Chemnitz.

This evening police said they had asked the organisers to end the march for the day, prompting calls of ‘resistance’ and booing and whistling from the crowd.

Tensions over Merkel’s 2015 decision to open Germany’s doors to a million asylum seekers have flared up this week since 35-year-old Daniel Hillig was killed last Sunday.

Right-wing groups including the AfD and the street movement PEGIDA said they had organised the march to mourn Mr Hillig, after a leaked arrest warrant revealed that two Syrian and Iraqi migrants are suspected of killing him.

Today’s protest is the latest in a wave of demonstrations in Chemnitz in former communist East Germany, the region of the country where the AfD has its strongest support. 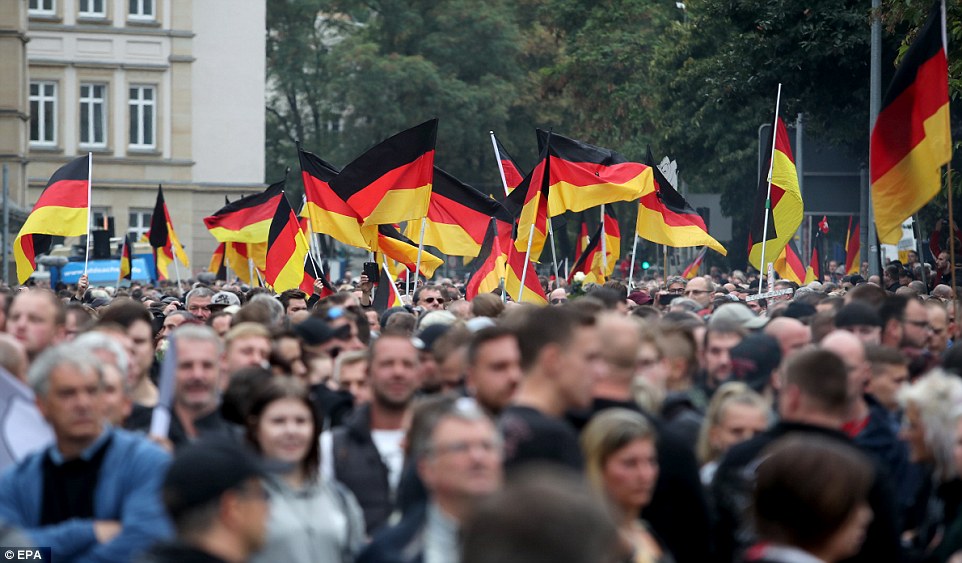 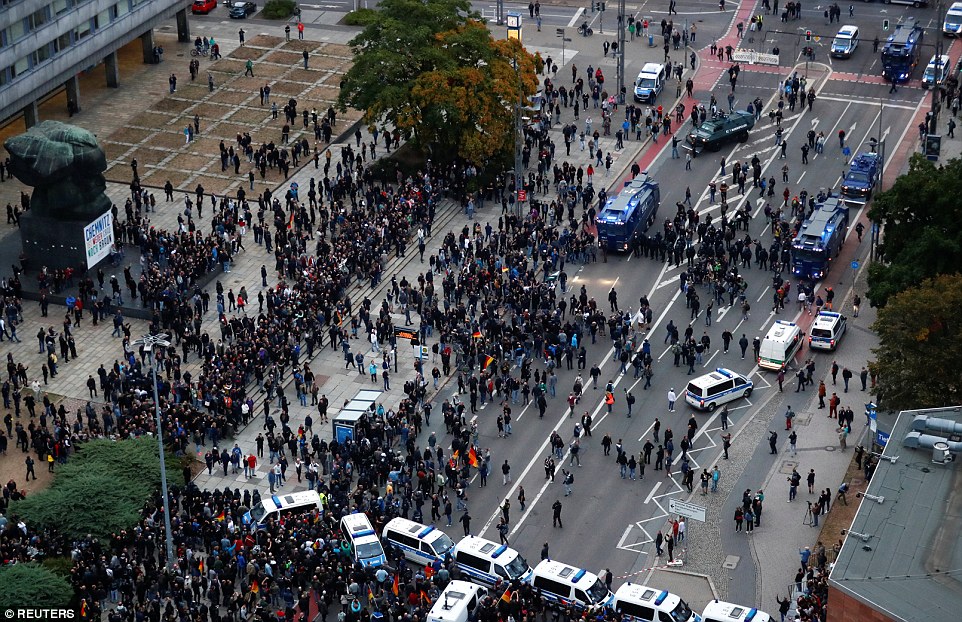 On Saturday, riot police chased black-clad anti-fascist protesters who had tried to make their way toward the far-right crowd, whose members waved the German flag, sang the national anthem and shouted: ‘Merkel must go!’

Police said around 4,500 right-wing demonstrators had marched through the city, days after Germany was shocked by scenes of violence and marchers making Hitler salutes amid clashes between protesters on Monday.

Leaders of the AfD and PEGIDA wore dark suits and held white roses as they began what they called a ‘mourning march’ on Saturday night.

Björn Höcke, a regional AfD leader who has come under fire in the past for calling Berlin’s Holocaust memorial a ‘monument of shame’, was pictured at Saturday’s protest.

At the other end of town leftist protesters started a march under the slogan ‘Heart instead of Hate’ in the centre of Chemnitz, which was known as Karl-Marx-Stadt during the Cold War.

Merkel, who on Friday wrapped up a three-day visit to Africa, has not yet commented on the events in the city.

‘Where is she? Travelling in Africa,’ said one of the speakers addressing the anti-immigrant crowd. ‘She should come here and face us citizens.’

Supporters of far-right groups say their march is to mourn the man who was stabbed to death and condemn what they say is government inaction in the face of rising migrant crime.

The anti-migrant sentiment has been particularly strong in Saxony, the state where Chemnitz is located and a stronghold of two groups which are seeking to launch a nationwide movement on Saturday night. 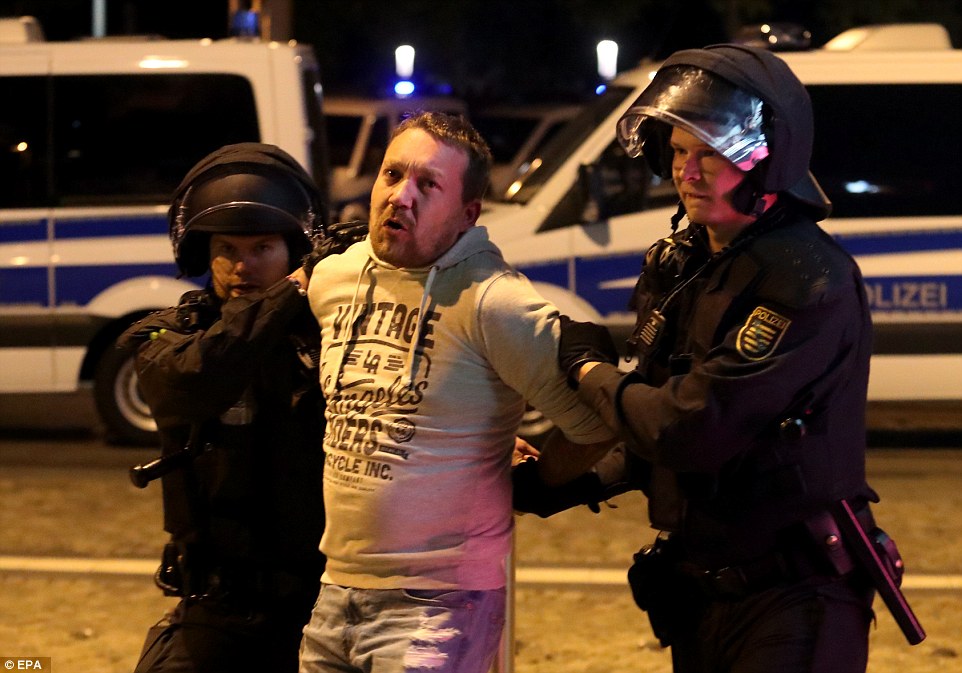 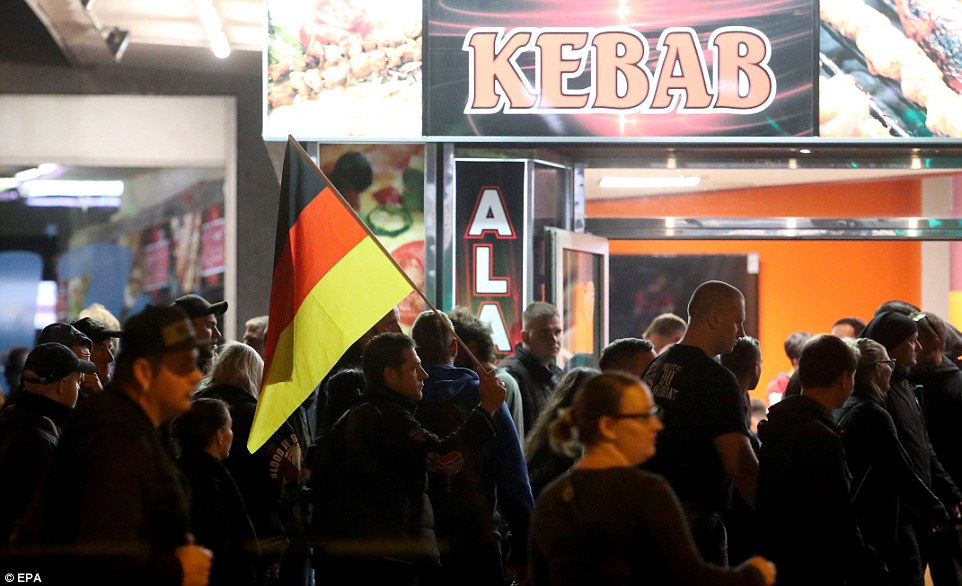 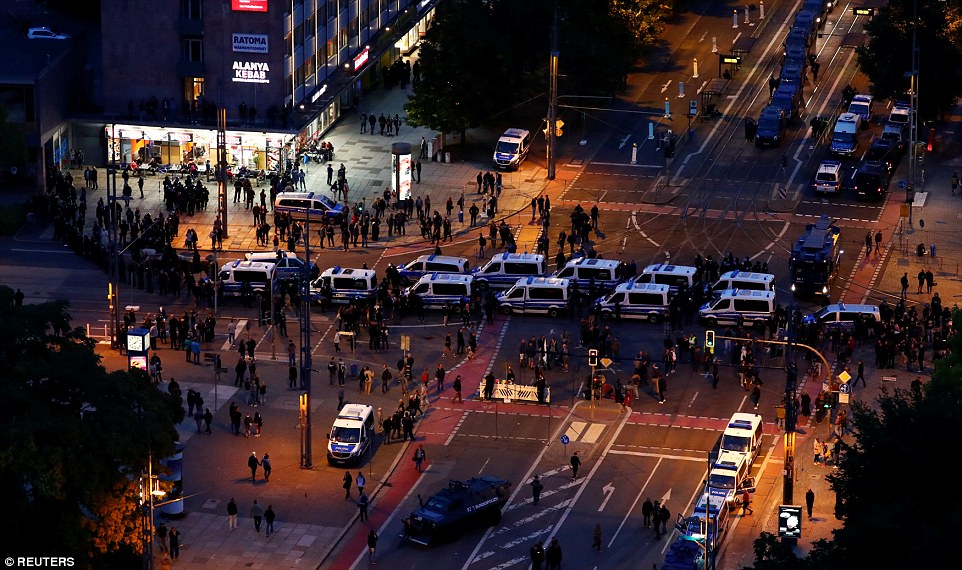 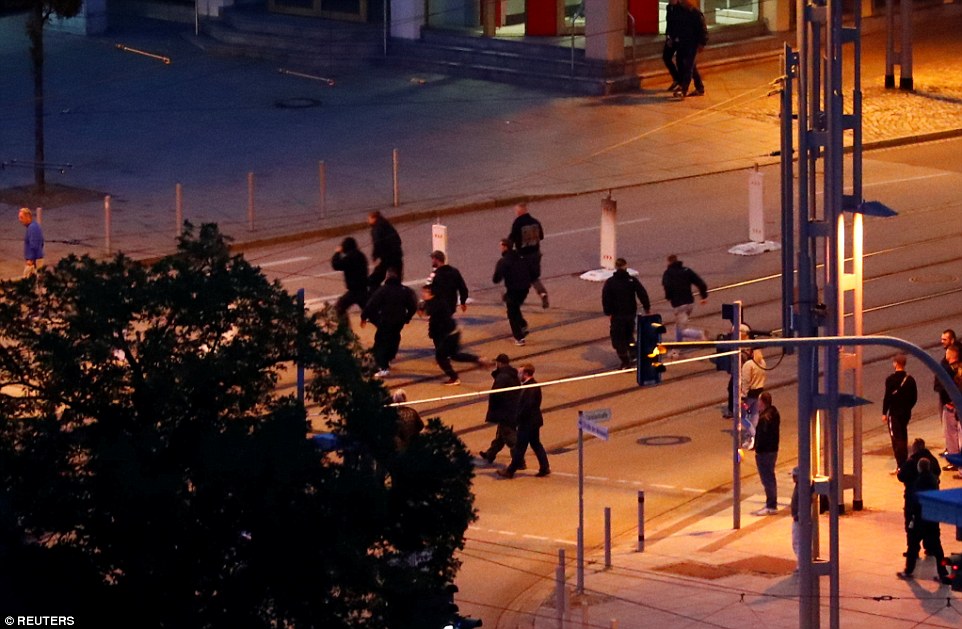 The Patriotic Europeans Against the Islamization of the West, or PEGIDA movement, has held weekly rallies in Saxony’s capital of Dresden while the far-right Alternative for Germany party, or AfD, received almost a quarter of the Saxony vote in last year’s federal election.

Their leftist opponents accuse them of using the murder to stoke racial hatred against migrants and refugees.

One of the anti-AfD marchers said: ‘Who was the stabbing victim? The far-right is exploiting his death by saying: ‘A German has been murdered.’ But he was an anti-fascist and people outside the city don’t know that.’

Germany’s interior minister Horst Seehofer, whose tough stance on migration has put him at odds with Merkel, said he understood why people ‘are upset about the brutal killing’ but said there was ‘no excuse for violence’.

He said: ‘We need a strong state and we have to do everything politically to overcome the polarization and division of our society.’

Images of skinheads raising their arms for a Hitler salute, chasing anyone they saw as outsiders and wrestling riot police to the ground were a painful reminder for many Germans of the country’s Nazi past. 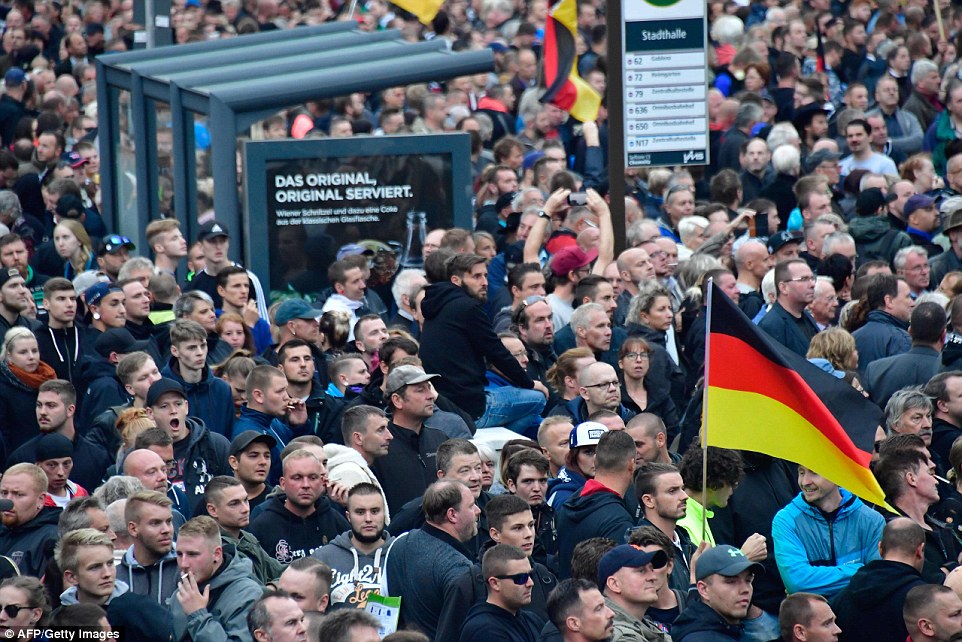 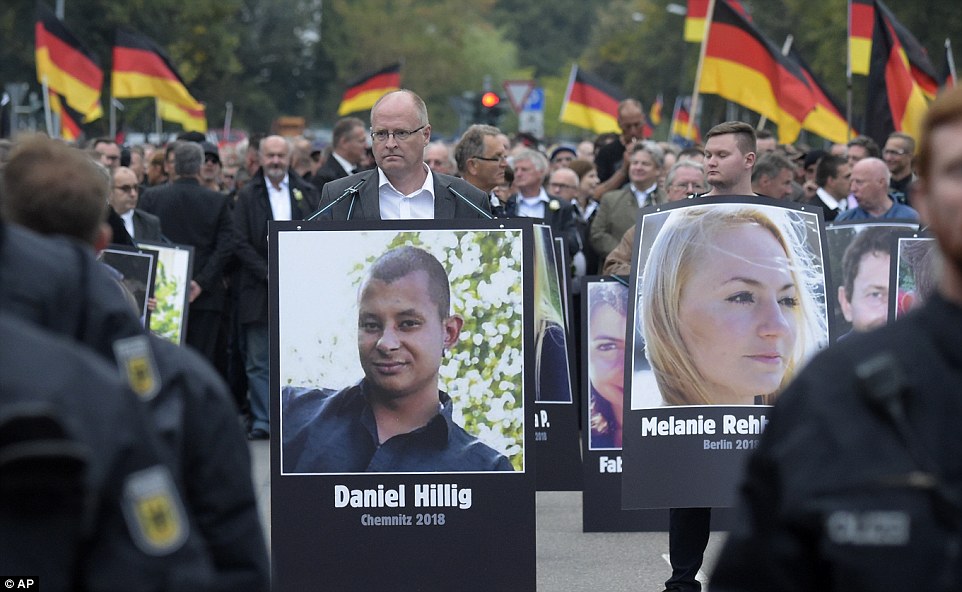 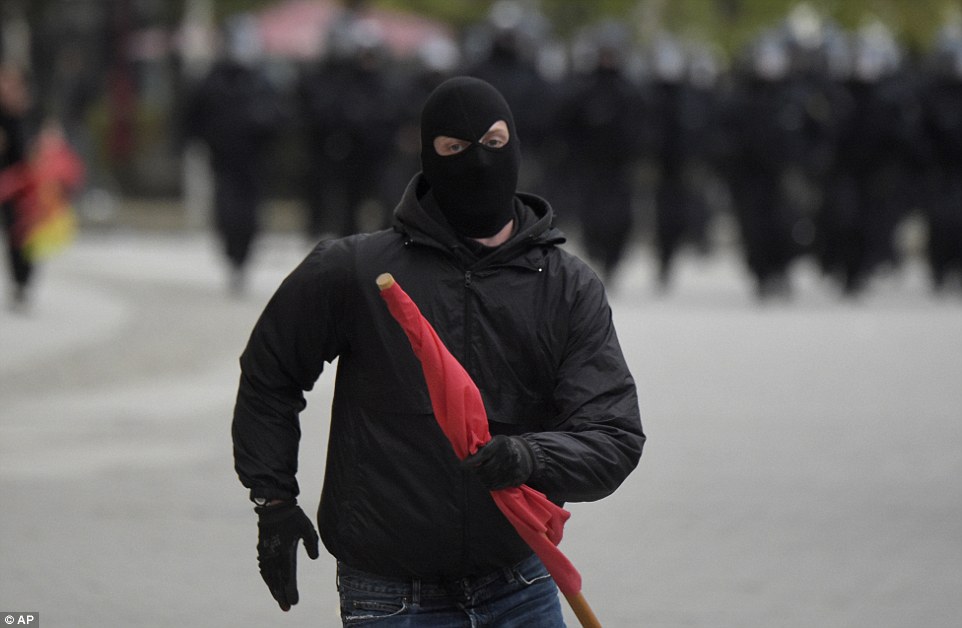 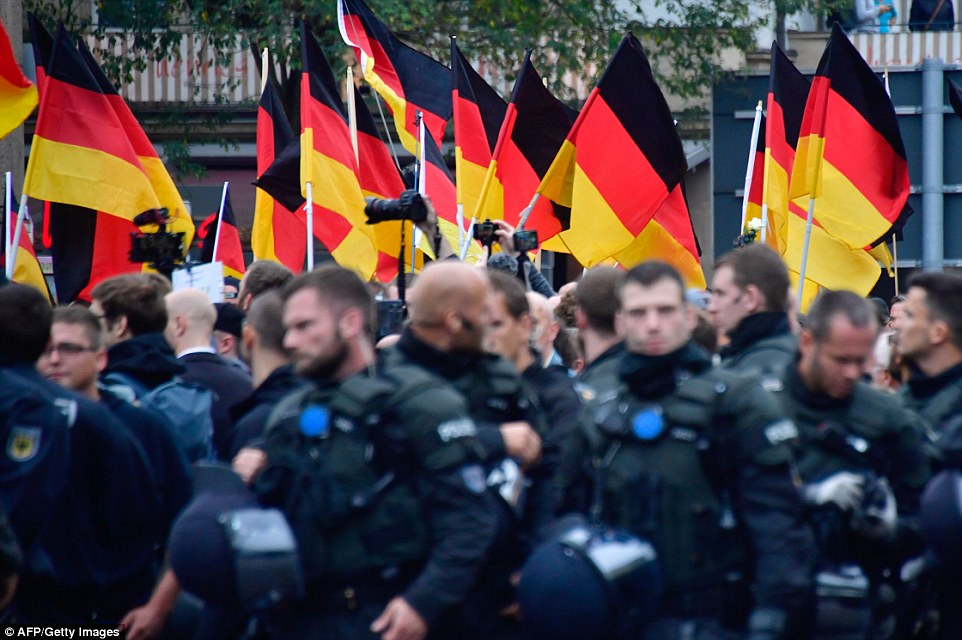 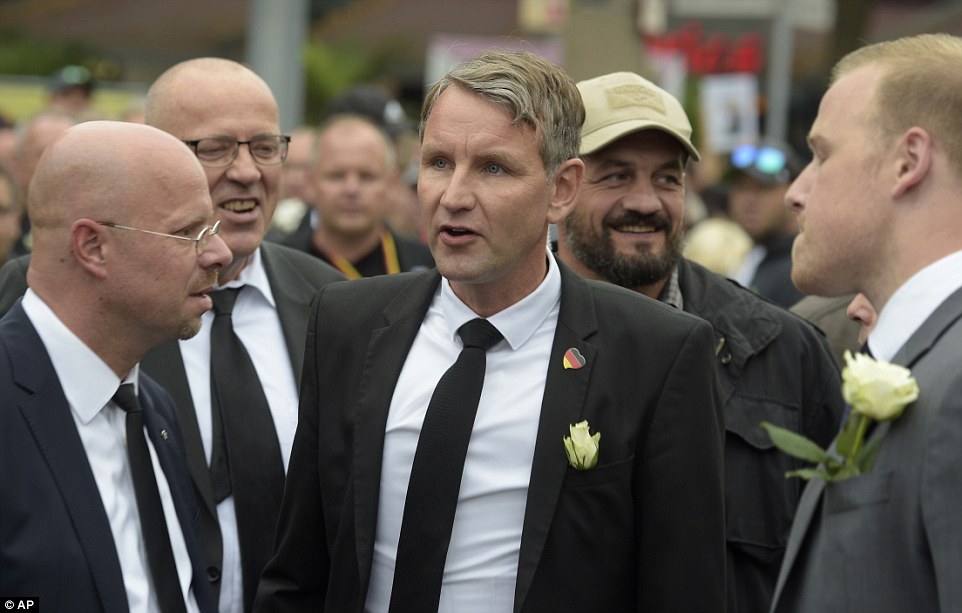 Björn Höcke, centre a regional leader of the right-wing Alternative for Germany party, participates in the march in Chemnitz 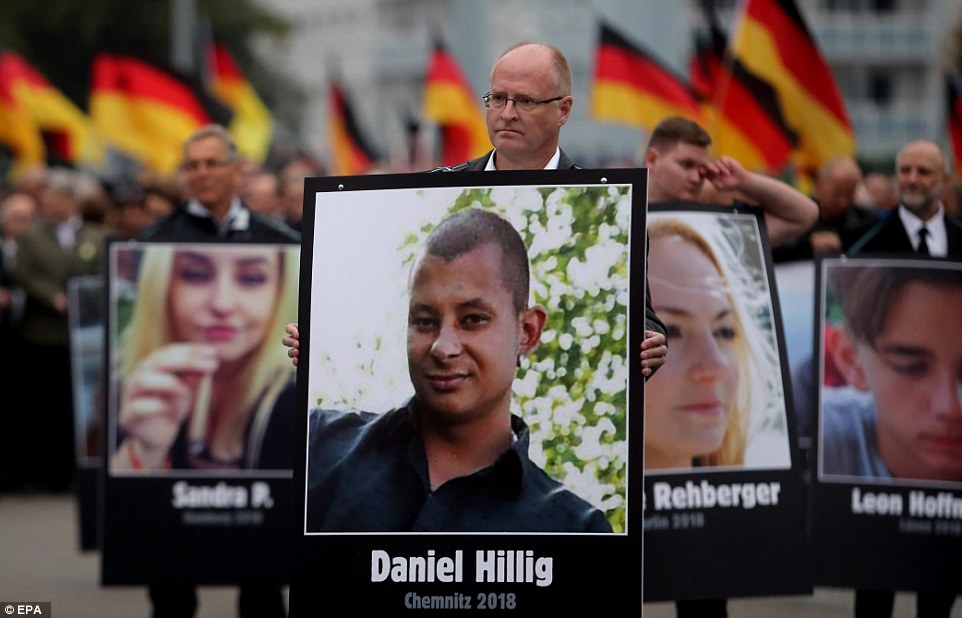 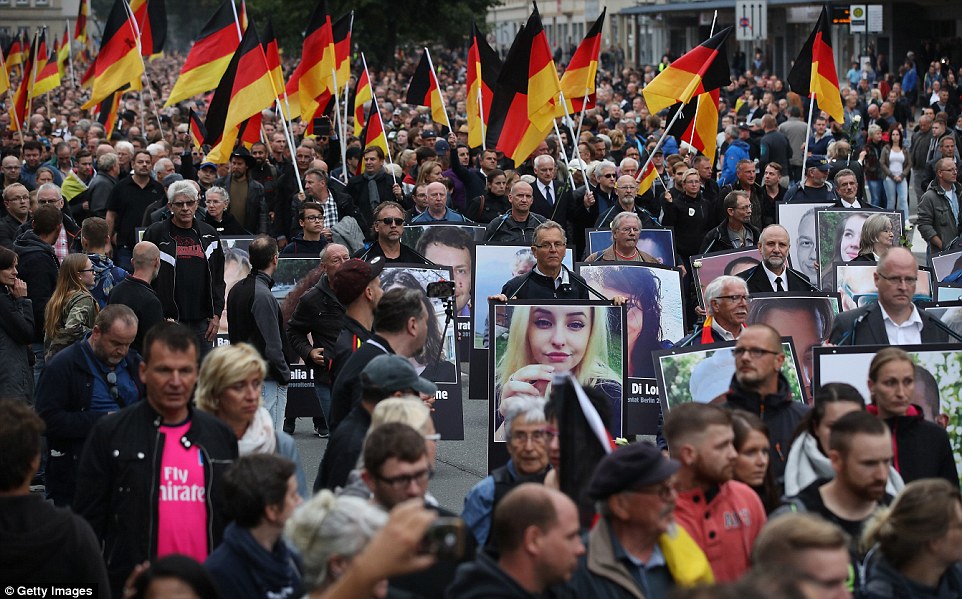 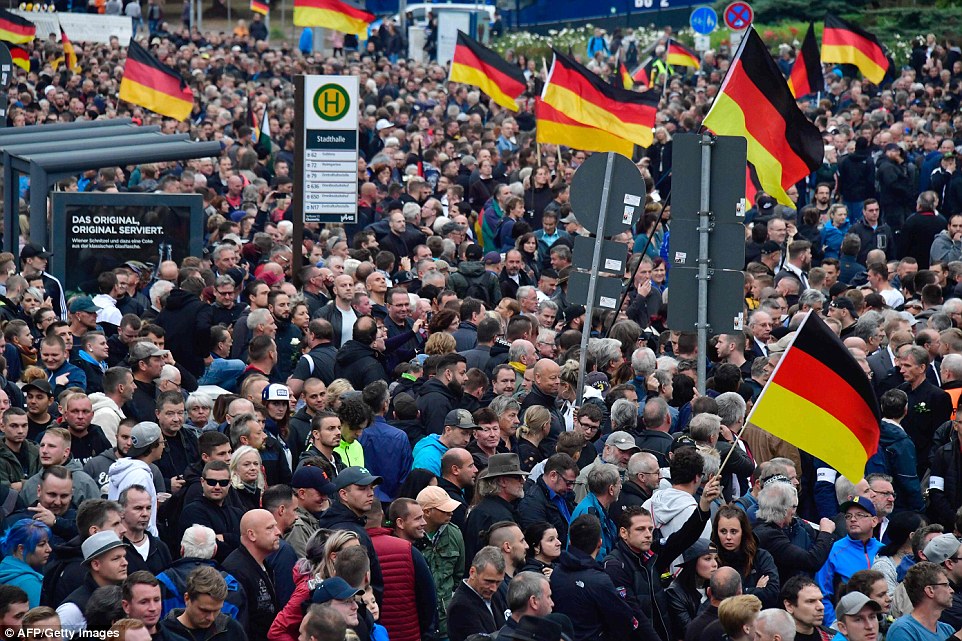 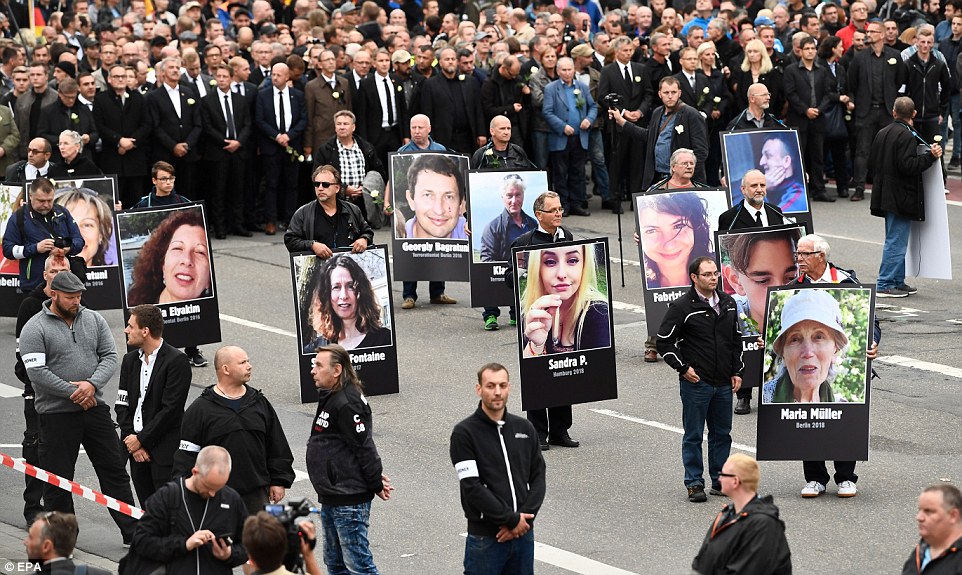 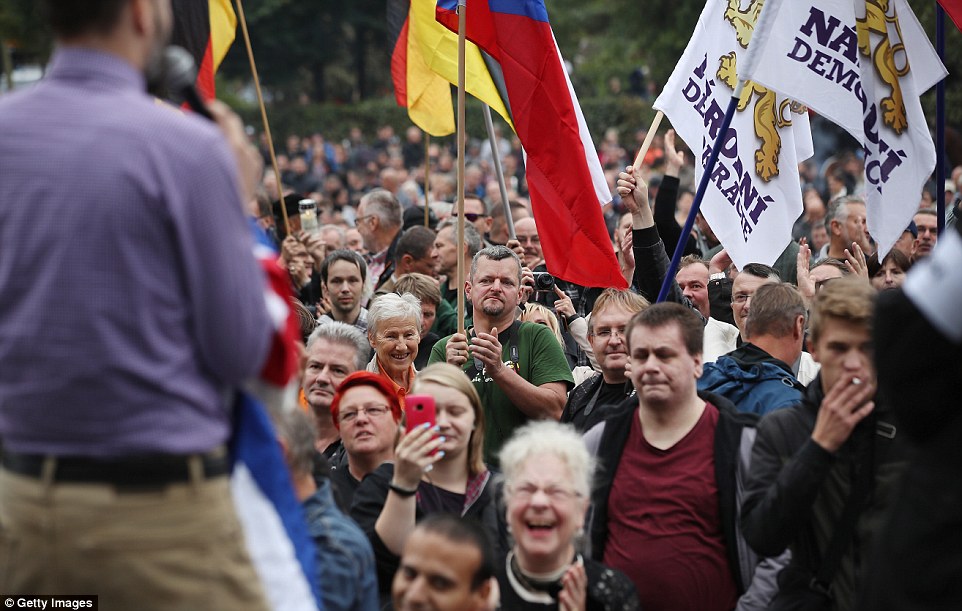 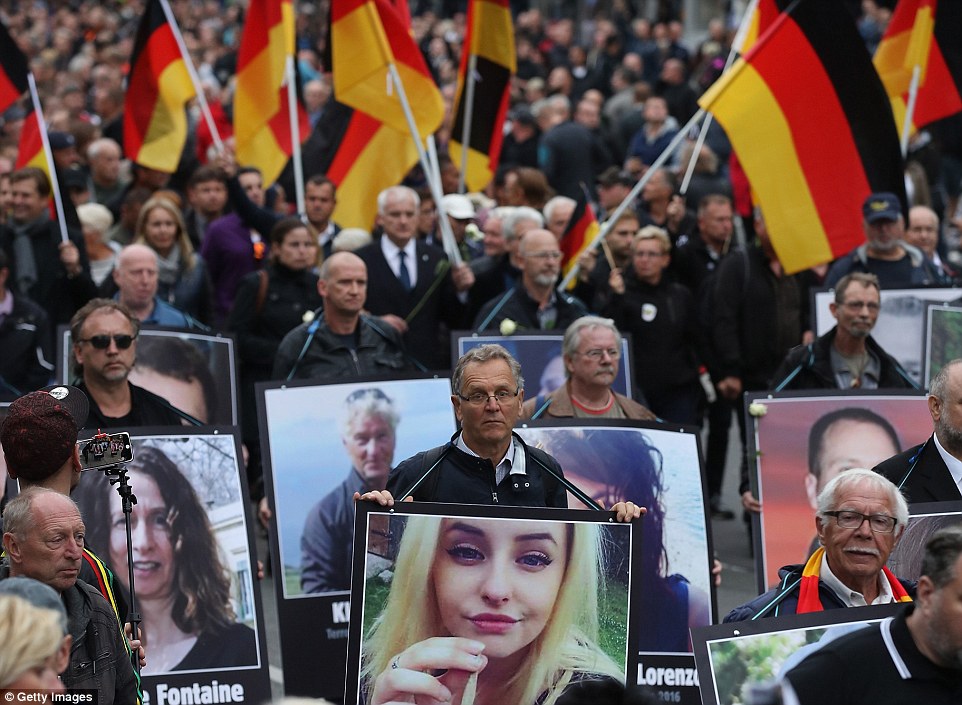 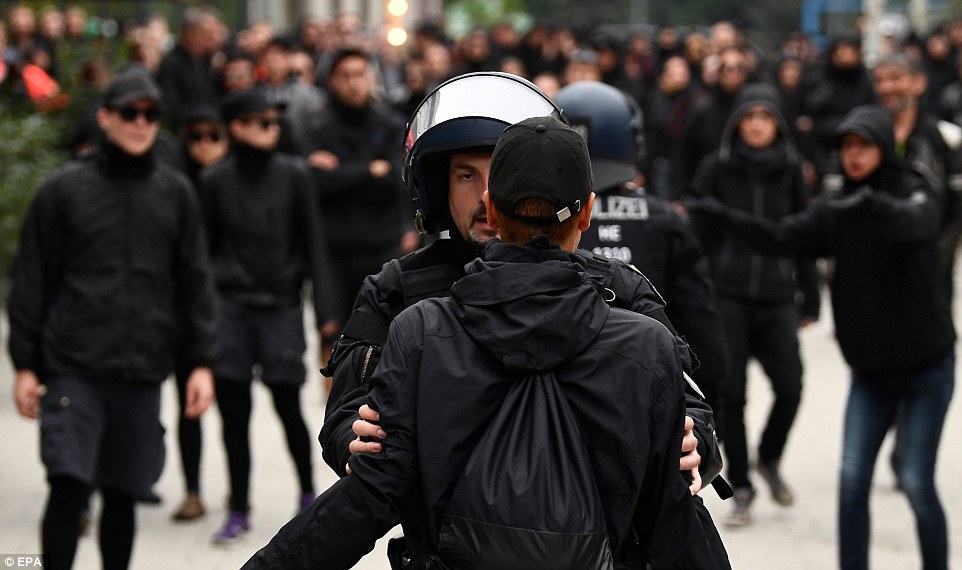 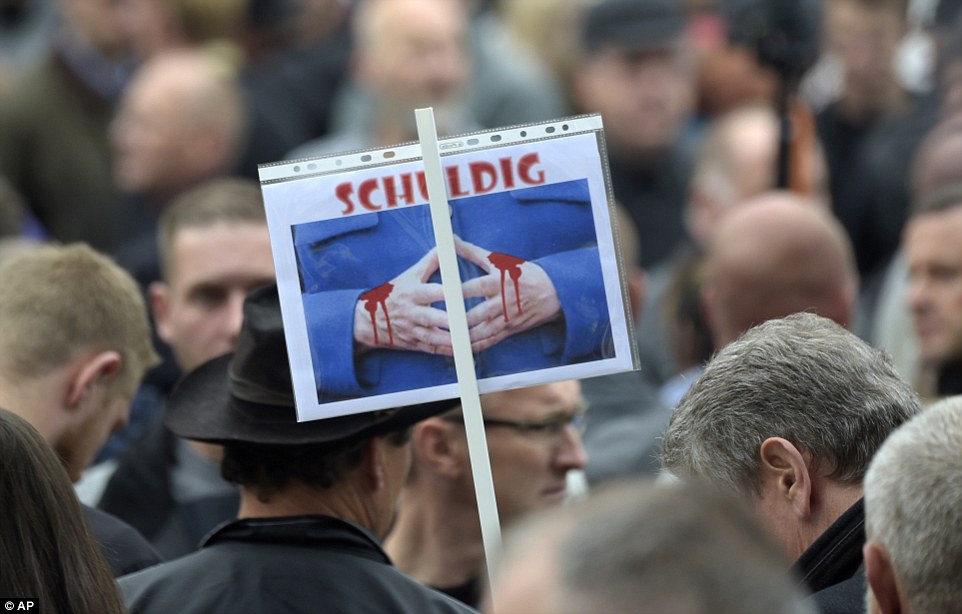 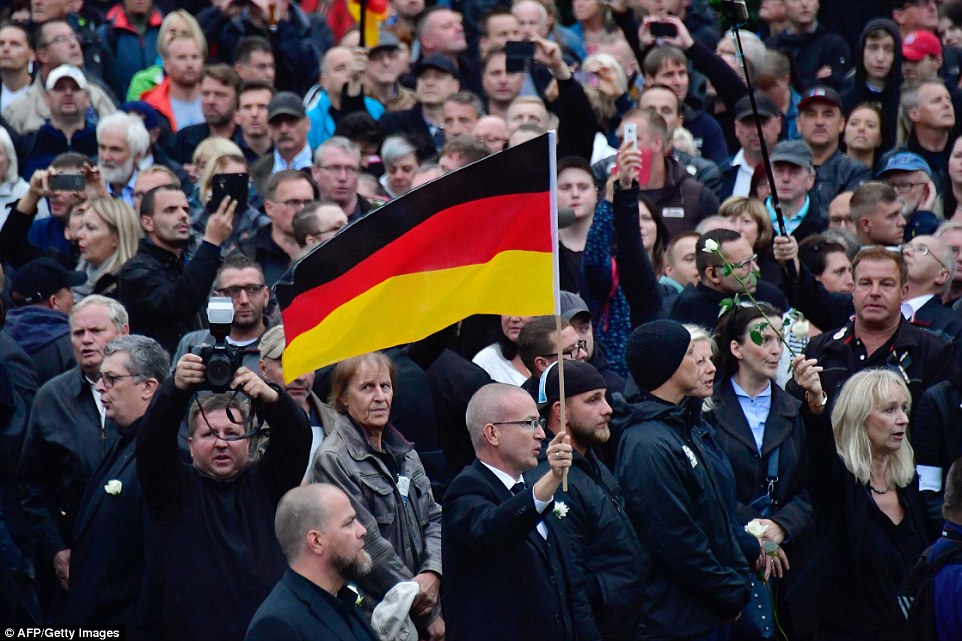 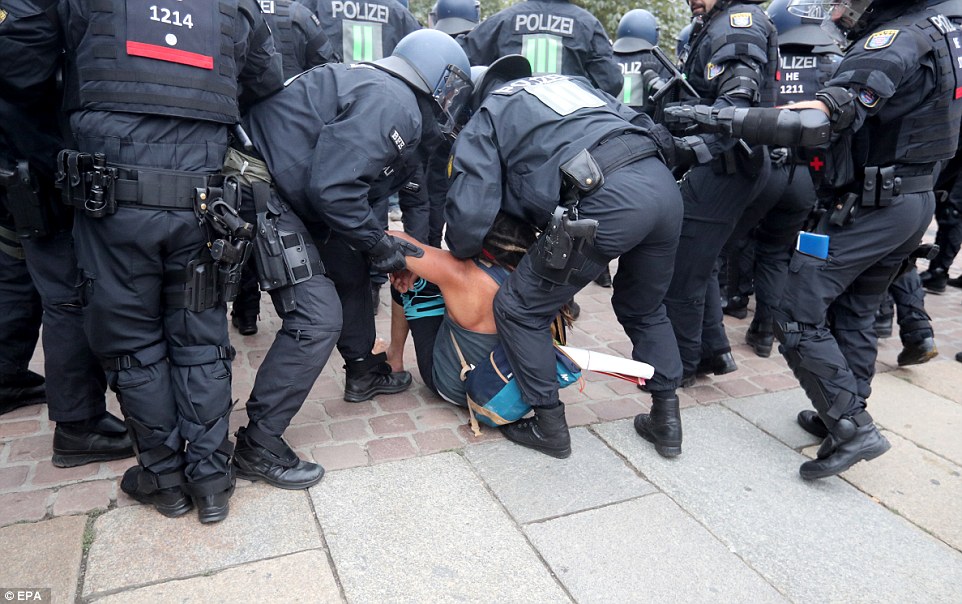 The leaking of the arrest warrant for one of the two suspects to PEGIDA raised concerns that some justice officials in the state of Saxony, where Chemnitz is located, were sympathetic to the far-right.

Daniel Zabel, 39, a judicial officer, admitted to the newspaper Bild that he had leaked details of the arrest warrant which alleges that the men knifed 35-year-old Hillig repeatedly in the chest.

Foreign Minister Heiko Maas, whose centre-left Social Democrats (SPD) hold the mayor’s office in Chemnitz and helped organise Saturday’s leftist march, said on Twitter that Germans had a special duty to stand up against any form of fascism.

‘When people are once again roaming our streets with the Hitler salute, our history mandates us to stand up for democracy,’ he wrote.

The influx of more than 1.6million people seeking asylum in the last four years, mainly Muslims from Syria, Iraq and Afghanistan, has already changed Germany’s social and political landscape.

The AfD, which says Islam is incompatible with the German constitution, entered the national parliament for first time in an election last year, securing third place after stealing voters from both Merkel’s conservatives and the SPD.

After the stabbing in Chemnitz, its leaders said the violent riots that followed were understandable. 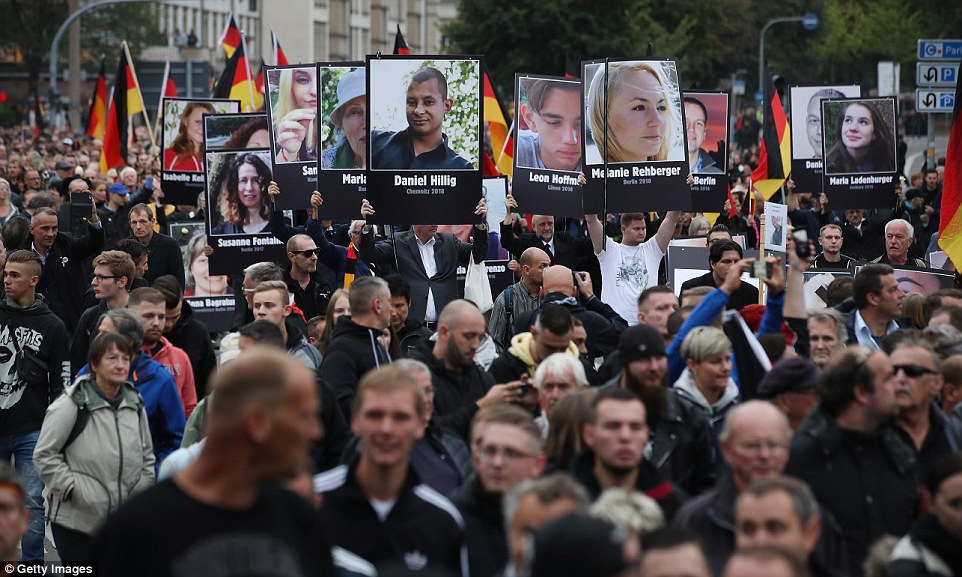 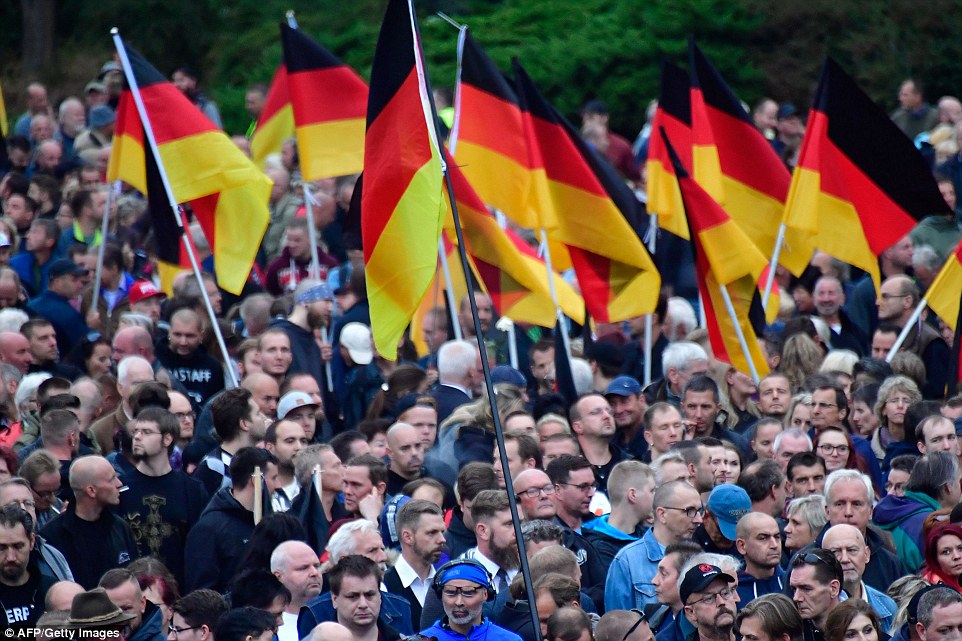 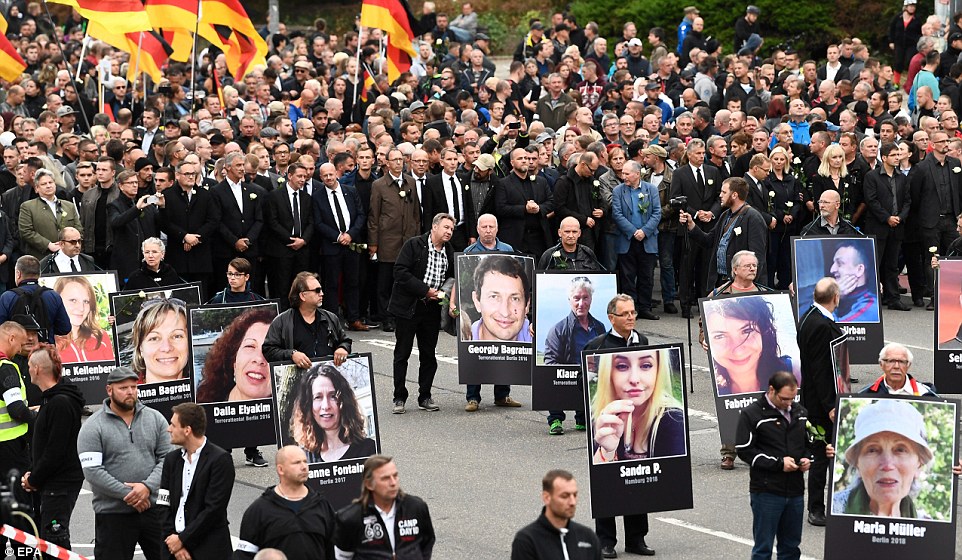 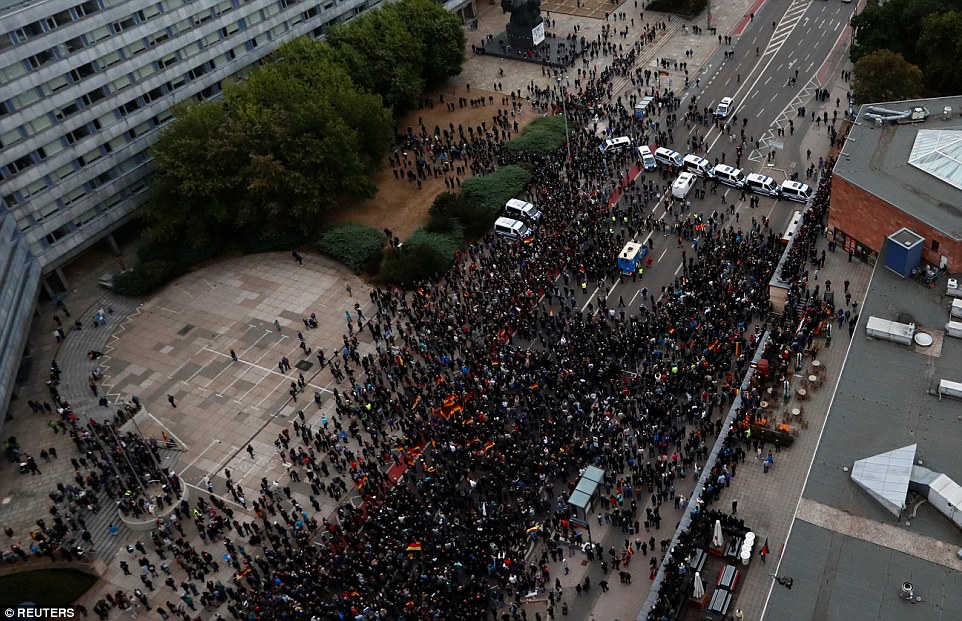 Police vehicles block the demonstration in Chemnitz, which is in the AfD stronghold of former communist East Germany 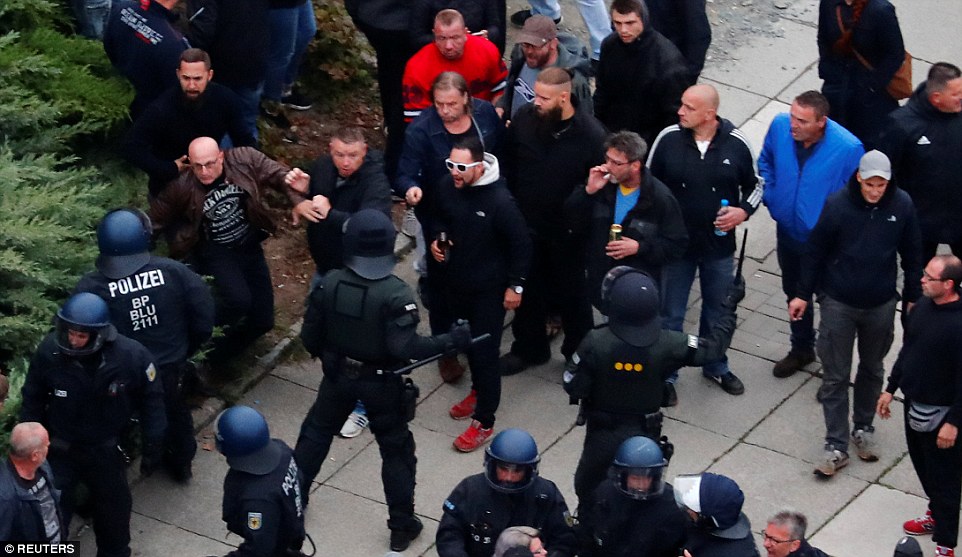 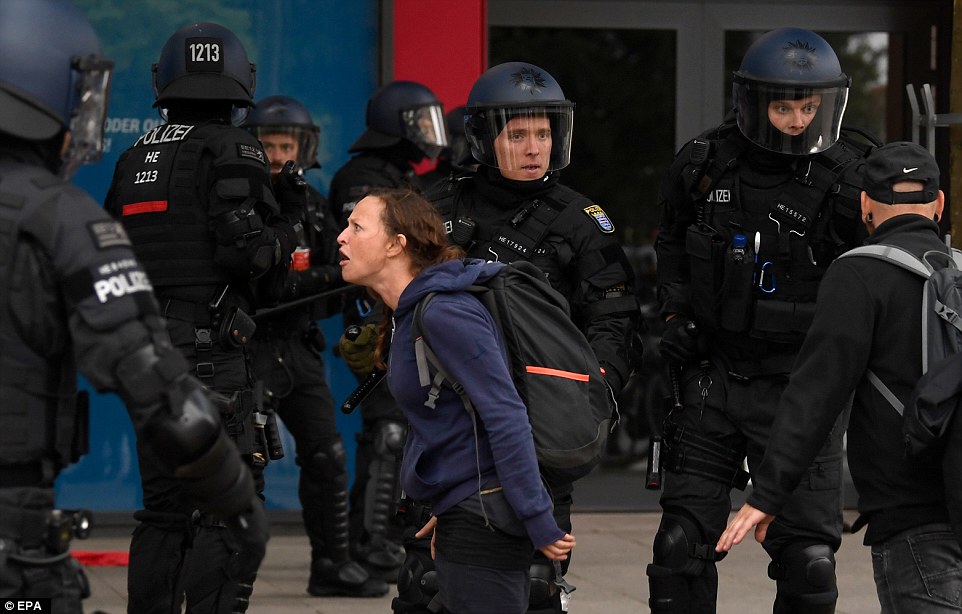 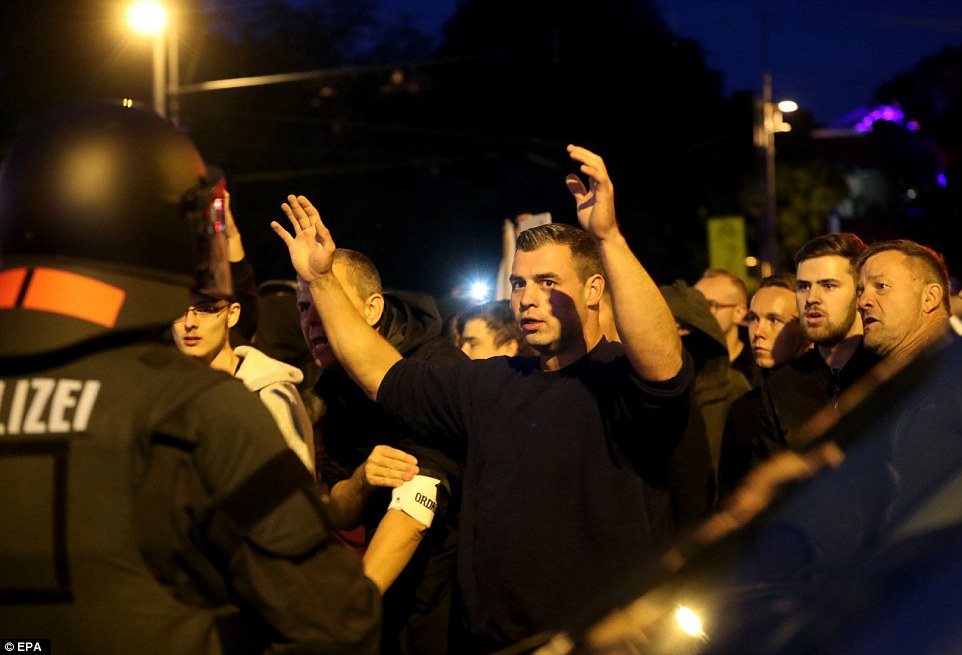 One thought on “Help! The police are failing my Muslim community!”