It has happened before — Bataclan, Manchester — and could easily happen again. 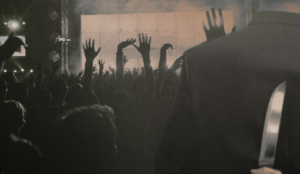 Shortly after the one-year anniversary of the mass shooting that targeted an outdoor concert on the Las Vegas Strip, a pro-ISIS media group is circulating an online poster warning of knife attacks at musical events.

Previous releases from Remah Media Production included a January poster showing a jihadist standing in front of a cityscape vowing to “sink America” and another showing jihadists standing in front of a nondescript legislative building vowing that “soon you will taste agony.” The group has also released video nasheeds, or songs to inspire terrorists.

In the new poster, a jihadist wearing a suit jacket stands with a large knife behind his back while behind concert-goers whose attention is fixed on the stage.

“Wait for our surprises,” warns the text, signed “Islamic State.”…