The suspects were regular worshippers at the All-Masjid & Madrasah Al-Furqan mosque, but its got nothing to do with Islam, we all know that:

This is the dramatic moment armed police lead a man away in handcuffs following an alleged hit-and-run on an officer this morning.

Masked police swooped in on the quiet street in Leicester and surrounded a house before a man slowly walked towards them with his arms up.

He was then arrested and put in the back of a police car.

The suspect was one of up to four people taken into custody after a constable was left with serious head injuries after being ‘deliberately’ mown down at 4.30am. 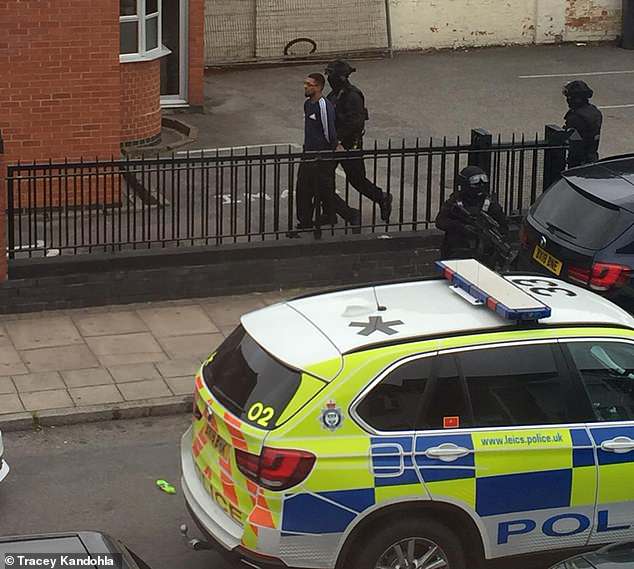 Muslims are decent people, you see. Nothing to worry about. We should be concerned about greasy Islamophobes like this one who’s dividing the community: 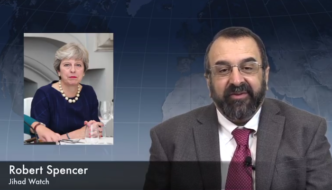 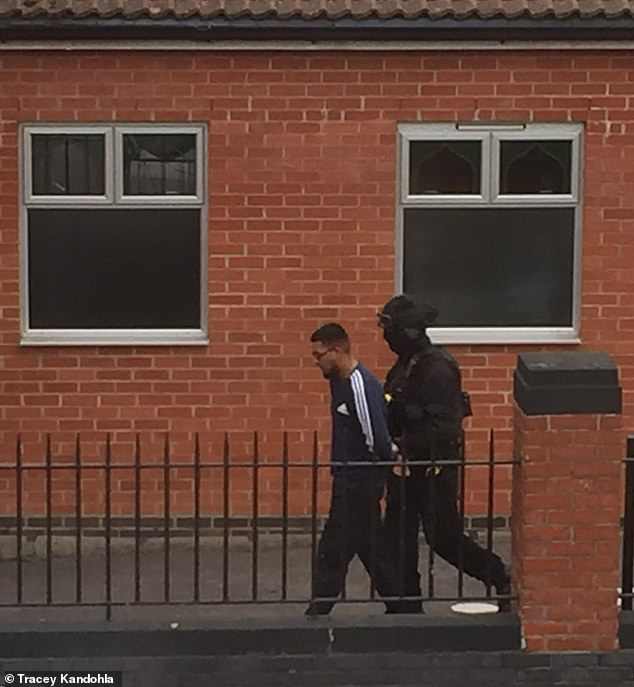 The suspect was taken into custody after a police constable was struck by a white Mercedes at 4.30am

Other images from the scene show multiple men being led into police cars.

The alleged hit-and-run left the policeman ‘screaming in pain’ in the middle of the street.

The incident happened just yards from where two of the three suspects were later arrested on suspicion of attempted murder.

The officer, who is in his 20s, was left with serious head injuries after being hit by a white Mercedes as he tried to stop it.

Mohammed Patel, who saw ‘a commotion’ as he as returning home form a night out at about 4.30am said: ‘I could see someone lying on the ground screaming out in real pain. 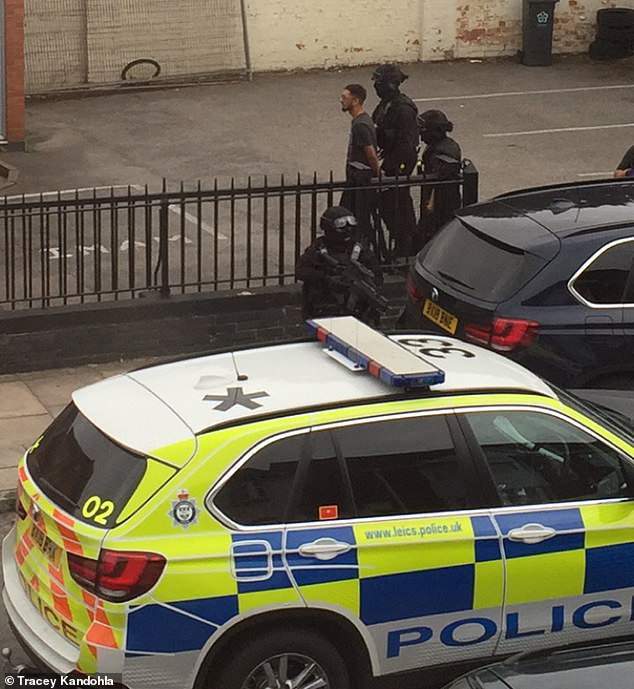 ‘Police told me to go indoors after asking me who lived where. A few hours later they came back, there must have been 20 armed cops, masked and helmeted, and they arrested three of my next door neighbours.

‘I was shocked because they’re a really nice family and not any trouble makers.

‘They came out one by one, first the two young men who were handcuffed but not resisting and then the woman, their sister, and they were whisked away.’ 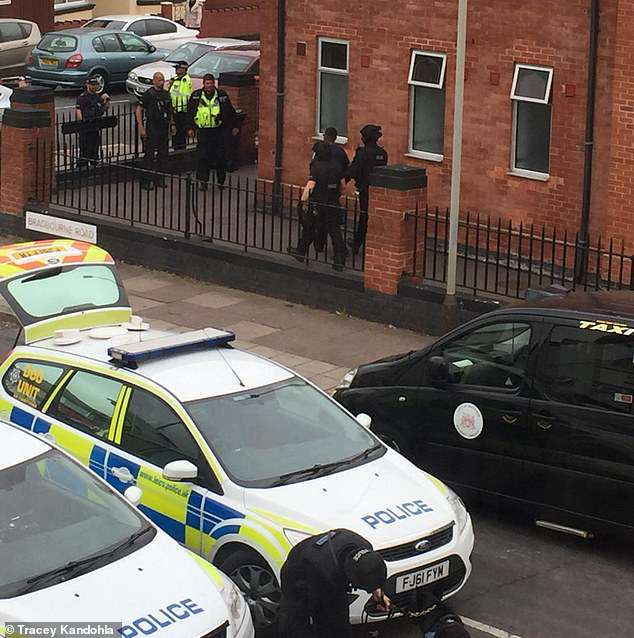 Decorator Mr Patel, 38, said: ‘We heard a policeman had been run over as he got out of his car to question a suspect about an attack earlier. He was badly injured. It’s very evil.’

He was attending morning prayer as he saw police surrounding a nearby newly built detached home and watched ‘in horror’ as armed cops arrested three of his fellow worshippers. 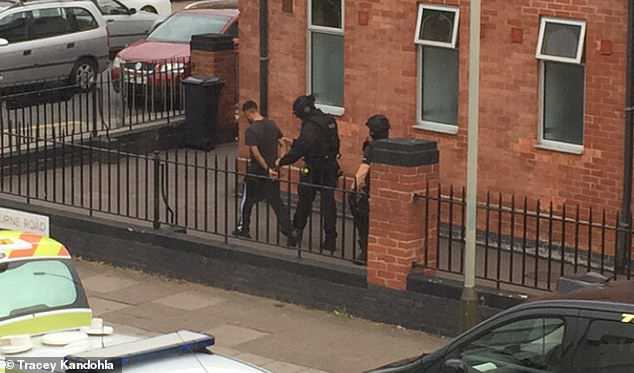 The attack left the policeman in his 20s was left with serious head injuries. Pictured: One of the suspects is escorted away by police

The father-of-five said: ‘There was a huge armed police and they blocked off the road as they made arrests.

‘They had guns pointing at the suspects as they led them from the house and their parents are devastated. No one really knows what’s going on.

It is believed the officer was hit as he tried to stop the car in the early hours of this morning. 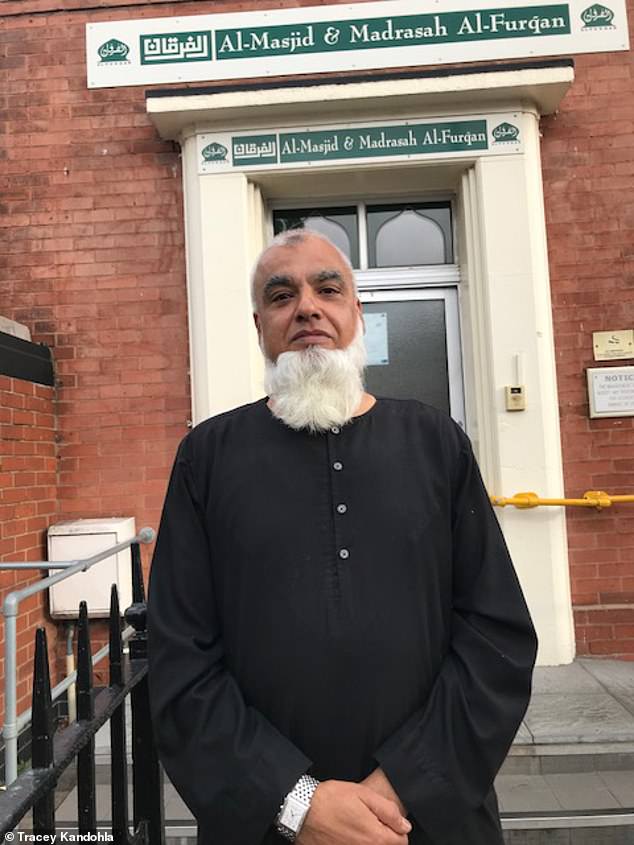 The alleged hit-and-run unfolded after police had at first been called to a street in Leicester amid reports a man had been assaulted.

A group of men were seen driving from the scene in Belvoir Street in a Volkswagen Polo.

Police said that as officers investigated the assault, they received reports a second car – a white Mercedes believed to have been at the scene – was seen with an occupant reportedly armed nearby.

Leicester Police said: ‘At about 4.30am this morning the Mercedes was sighted in Bradbourne Road, Leicester, and during attempts to stop the vehicle an officer was struck as the car left the area.