[T]hey were unable to persuade Hungary to , flood the country with African/Mohammedan savages, [so] the plan now is that they will take border protection rights away from us,” he told Hungarian radio. 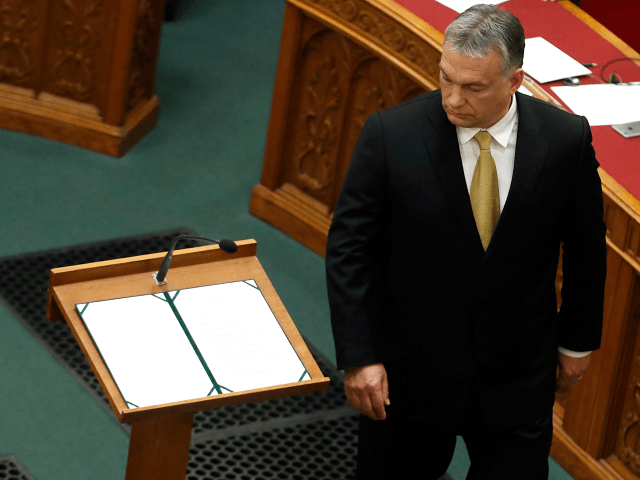 Hungarian leader Viktor Orbán has described the EU’s latest migration proposals as “like a collection of horror stories”.

In a post on the Hungarian government’s official About Hungary website, Orbán spokesman Zoltán Kovács describes a looming battle of “globalists versus defenders of the nation”, with an EU establishment facing serious electoral reverses in the European Parliament elections in 2019 in the former camp and Prime Minister Orbán very firmly in the latter.

“On the one hand, the pro-migration forces continue their relentless drive to push for more immigration and denigrate anyone who dares to oppose them. On the other hand, we see the battle lines being drawn in the conflict between globalists and nationalists and, in particular, a clear picture of who stands where,” Kovács said.

Orbán himself told Kossuth Rádió’s Good Morning Hungary programme that he believes the EU is pushing its migration policies “at full steam” because it fears that “after the [European Parliament] elections, there might be an anti-migration majority on the continent”.

His primary concern with the “horror story” proposals is the way they are framed as border management measures rather than border protection measures — “The phrase border protection means that there is a border that we should protect, while the word border management means that there is a border, and we have to find a way through it,” he explained.

According to Kovács, the measures “the liberal EU elite” are proposing include a “permanent pro-migration programme, opening up new avenues for legal immigration, experimental migration deals with African countries and a so-called ‘humanitarian visa’.”

One of the EU’s proposed measures for bringing the migrant crisis under control which Hungary is particularly wary of is a plan to significantly expand the EU Border and Coast Guard Agency (Frontex) and increase its powers, ostensibly so it can help relieve the pressure on countries at the bloc’s common external border.

Orbán believes that the EU intends to take control of border control not to help with burden-sharing, but to prevent anti-mass migration like Hungary — which slashed illegal migration by over 99 percent after rapidly constructing a double-lined border barrier manned by a newly expanded border guard —  from enforcing strict controls.

“They want to take away from us the keys to the gate… [T]hey were unable to persuade Hungary to let migrants in, [so] the plan now is that they will take border protection rights away from us,” he told Hungarian radio.

“They want no less than to send their mercenaries from Brussels to replace our Hungarians who are defending the border… Let us not be under any illusion… they will allow in migrants,” he warned.

They are following an ideology. This ideology of Globalism has not been presented or explained to the people.

Essentially it means that we are being robbed of our birth-right and are having our European Homeland territories ceded to third-world savages.

This in short is demographic warfare against the white ethnic states and people’s of Western Europe.

When the people catch up they will rebel. The question is whether the damage will be so acute that by the time we catch  we will be overwhelmed entirely by the process of multicultural subversion.

Our governments (the entire Establishment) are robbers, thieves and criminals who I sincerely hope will one day stand in the dock and be sentenced to life imprisonment with extreme punitive measures,