“We have to protect ourselves with respect to China, Russia and even the United States of America.”— Emmanuel Macron 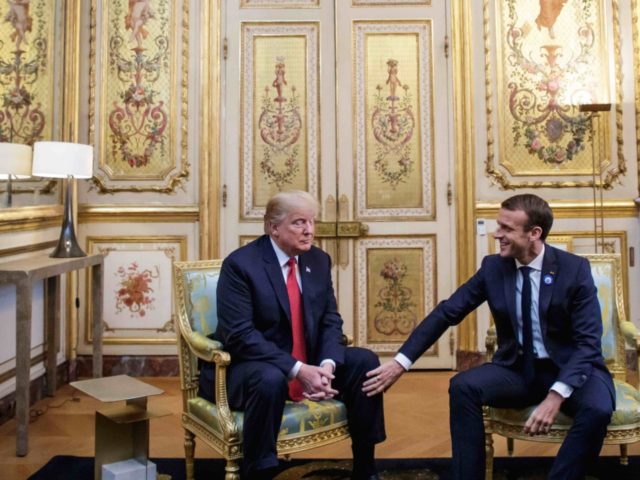 French President Emmanuel Macron has apparently decided that with his approval ratings in the toilet, his best bet for a political resurgence is to attack the United States.

This isn’t a bad move, for a French president. Hatred for America has been a powerful mobilizing force in France since shortly after the American army liberated the French from Nazi German occupation in 1944.

In his speech at the official ceremony marking a hundred years since the U.S. saved France from Germany and ended World War I, Macron took a direct swipe at President Donald Trump and his voters. Macron said that the “ancient demons” that caused World War I and millions of deaths are growing stronger.

“Patriotism is the exact opposite of nationalism. Nationalism is the betrayal of patriotism,” Macron pronounced, as Trump and other world leaders looked on.

He added, “In saying ‘Our interests first, whatever happens to the others,’ you erase the most precious thing a nation can have, that which makes it live, that which causes it to be great and that which is most important: Its moral values.” “Brussels should seize control of the bloc’s external frontiers and impose a common asylum policy on member states.”

So it’s no longer countries anymore, it’s ‘states’…. as the iron fist of communism squeezes the life-blood out of Europe. Macron’s speech on Sunday was his second rhetorical assault against America in under a week. In a radio interview last Tuesday, Macron called for Europe to raise “a true European army,” to defend against the U.S., Russia and China.

In Macron’s words, “We have to protect ourselves with respect to China, Russia and even the United States of America.”

Upon landing in France over the weekend, Trump called Macron’s remarks about defending against America “insulting.” The President tweeted that instead of figuring out a way to fight the U.S., the Europeans should pay their share of NATO’s budget, which the U.S. has been underwriting.

Macron’s anti-Americanism isn’t only fueled by domestic political concerns. He has two other – perhaps even more significant – causes for his hostility.

First, and most fundamentally, Macron rightly views Trump’s presidency and his nationalist vision of America as an existential threat to the European Union. As political philosopher Yoram Hazony explains in his vital book, The Virtue of Nationalism, (Basic Books 2018), globalism, the foundational rationale of the European Union, is in essence an imperialist project.

Like its ideological twin and sometimes competitor in the U.S. — namely, American internationalism or liberal internationalism — the EU is predicated on the idea that nations should be shorn of their power to determine and advance their national interests in accordance with the values and needs of their people.

In the neo-imperialist models advanced by the EU and by American internationalists, national powers should be transferred to international, transnational, or supranational bodies.

Hazony explains that with little to no discussion inside their own societies, and no consent from their respective publics, at the end of the Cold War, “Western leaders became preoccupied with two great imperialist projects: the European Union, which has progressively relieved member nations of many of the powers usually associated with political independence; and the project of establishing an American ‘world order,’ in which nations that do not abide by international law will be coerced into doing so, principally by means of American military might.”

As Hazony explained, the absence of discussion about the imperialist nature of these two projects owed in part to the absence of public support for them. In Europe, the EU’s demand for member nations to surrender their national independence to Brussels has never been popular. A decade ago, the French, the Dutch, and the Irish all voted down increased integration in the European Union. The French, Dutch and Irish all viewed increased integration as a blow to democratic norms.

Rather than respect their objections and forge a less coercive form of union, the leaders of the EU in Brussels drafted a new agreement among themselves that simply rewrote the rejected treaties while blocking member states from putting their actions before their people for approval.

In 2016, of course, the British people voted to abandon the EU altogether in favor of national sovereignty. In the intervening two years, we have seen repeated attempts by the EU on the one hand and by British opponents of Brexit on the other to water down the Brexit vote to meaninglessness.

In the U.S., Donald Trump’s “America First” message resonated in the national psyche after two decades of post-Cold War presidents preaching various forms of liberal internationalism. George H.W. Bush, Bill Clinton, George W. Bush, and Barack Obama all in their turn embraced the mantle of American global leadership predicated on various notions of post-nationalist international law, democracy, and liberal internationalism. Each, in turn, involved the U.S. in ideological wars and campaigns that brought few gains to the American people.

As in Europe, American rejection of “Pax Americana: is more visceral than intellectual. Intellectual analysis of the merits of a U.S.-led global world order has been blocked by the unsubstantiated assertion by globalists that nationalism is inherently malevolent. Hazony’s book provides the missing philosophical argument for Trump’s nationalism, and places it in the long tradition of American nationalism that stretched from the Pilgrims to the Second World War.

President Trump’s nationalist message has won the U.S. the appreciation, support and respect of many European nations as well as many nations worldwide. Following the lead of the American voters, the Hungarians and Austrians elected nationalist leaders. Hungarian President Viktor Orban and Austrian Chancellor Sebastian Kurz, along with Polish President Andez Duda and others, have embraced Trump’s nationalist model. They rightly view it as an alternative to the EU.

The EU leadership in Brussels, Paris, and Berlin in turn perceives the rise of nationalist governments and parties in Europe as a strategic threat to the European Union. As the leader of this resurgent nationalist wave, coming after four successive U.S. administrations led by presidents who saw the world very much as the European globalists see it, Trump threatens the EU more fundamentally than any single leader ever has.

The final reason that Macron believes his interests are served by picking a fight with Trump is because he is trying to position himself as the heir to outgoing German Chancellor Angela Merkel’s leadership of the EU.

Since taking office, Macron has repeatedly shown that his view of leadership has little to do with actual accomplishments. As France’s economy dribbles along with recession-like growth rates, and the French people express deep seated pessimism about their future, Macron entertains them with stunts and photo-ops. During his meeting with Trump at the NATO summit in Brussels in May 2017, for instance, Macron famously tried to assert his dominance over Trump by squeezing his hand during their handshake.

In his radio interview last week, Macron said the Trump administration’s decision last month to withdraw from the Intermediate Range Nuclear Forces Treaty (INF) is what propelled him to declare that Europe needs to defend itself against the United States, just as it needs to defend itself from Russia and China.

In his words, “When I see President Trump announcing that he’s quitting a major disarmament treaty which was formed after the 1980s Euro-missile crisis that hit Europe, who is the main victim? Europe and its security.”

The ironic aspect of Macron’s statement is that the reason the U.S. pulled out of the INF treaty, which bars the U.S. and Russia from fielding and developing nuclear and conventional missiles and launchers with ranges of 500-1,000 kilometers, is that Russia was systematically breaching it. And Russia’s missile development activities directly threaten Europe.

By withdrawing from the INF, the Trump administration merely granted itself the ability to contend with the reality that the treaty is already dead.

It is impossible to see how Europe would be safer if the Trump administration had simply maintained the Obama administration’s abject refusal to acknowledge that the Russians have been actively developing and deploying intermediate range missiles for years.

This then brings us to the crux of Macron’s conceit – and indeed the conceit of the European Union more generally. The EU presents itself as a world power not by virtue of its actions, but by virtue of its virtue-signaling against America. Trump endangers Europe by rejecting the EU’s assertion of moral superiority in favor of the brick-and-mortar national interests of the American people. 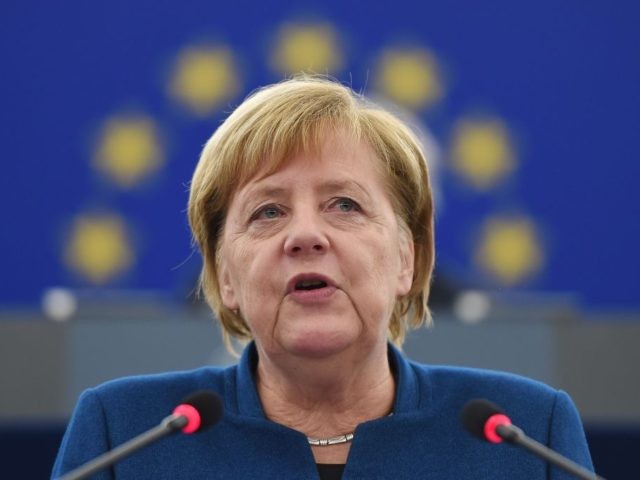 Angela Merkel has called for the creation of a “real, true” EU army, days after stating that only through globalism and ‘United Nations values’ can there be peace in the world.

“What is really important, if we look at the developments of the past year, is that we have to work on a vision of one day creating a real, true European army,” stated the German chancellor during an address at the European Parliament in Strasbourg Tuesday.

Speaking at a debate on the future of the bloc, Merkel told MEPs that the move — which was urged by globalist French President Emmanuel Macron last week — “would show the world that there will never be war again between European countries”.

“We need to understand that tolerance is the soul of Europe [and] that it is [the] essential component of what makes us Europeans,” said Merkel, before making it clear that tolerance would not extend to allowing member states whose populations elected populist governments to maintain national sovereignty over issues that mean a lot to their electorates.

“Solidarity is based on tolerance and this is Europe’s strength. It is part of our common European DNA and it means overcoming national egoisms,” she continued, going on to launch a thinly-veiled attack on Poland, Hungary, and Italy.

“Solidarity also means that if you weaken the rule of law in one country or attack freedom of press in one country, you do so in the whole of the EU,” stated the chancellor, adding: “If you try to solve problems by making new debts, you disregard commitments made and question the foundations for strength and stability of the Euro area.”

Closing the speech, in which she had also claimed that deadly terror atrocities in Europe were attacks on the continent’s “values”, Merkel told the EU parliament: “Nationalism and egoism must never have a chance to flourish again in Europe. Tolerance and solidarity are our future. And this future is worth fighting for.”

The veteran German leader’s call for an EU army came just days after the Paris Peace Forum, where Merkel hit out at “blinkered nationalism” and asserted that only through globalism and ‘shared [United Nations] values’ can the world “overcome the horrors of the past and pave a new future”.

Following Macron’s declaration last week that Brussels must build an EU army to “protect” the bloc from “China, Russia and even the United States of America,” the French head of state appeared to use the Paris platform as another chance to lash out at the ‘America First’ agenda of his U.S. counterpart, stating: “Patriotism is the exact opposite of nationalism: nationalism is a betrayal of patriotism.”